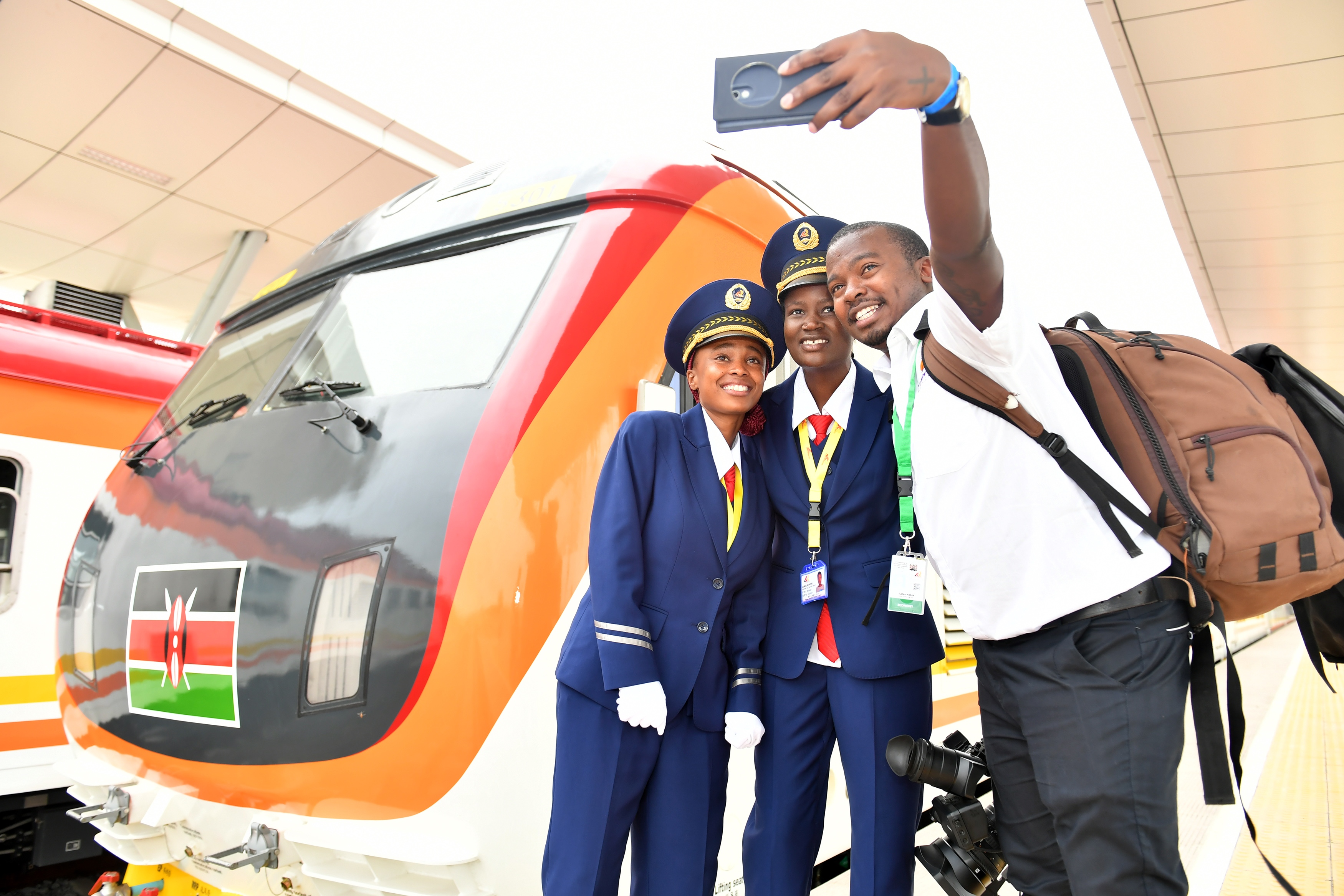 A Kenyan journalist takes a selfie with female train drivers Concilia (C) and Alice (L) on the launching day of the Mombasa-Nairobi Standard Gauge Railway (SGR) in Mombasa, Kenya, on May 31, 2017. (Photo: Xinhua)

"Africa has the youngest population. It's the future of the world. By some count, by the end of the century, one in three people will be Africans in the world," said Cobus Van Staden, a senior China-Africa researcher.

BEIJING, Sept. 4 (Xinhua) -- One year ago, at the opening ceremony of the 2018 Beijing Summit of the Forum on China-Africa Cooperation, Chinese President Xi Jinping said Africa's development has great potential and this great continent is full of hope.

In the first decade of the 21st century, six of the world's 10 fastest-growing economies were in sub-Saharan Africa.

After decades of efforts to catch up, Africa now has a real chance to achieve stable development, accelerate its integration process and raise its international status.

Between 1896 and 1901, British colonists built a meter gauge railway in Kenya to link the port of Mombasa and Uganda to tighten control of the "British East Africa," a proof of the continent's history of colonial oppression.

It was only after the 1960s and 1970s that most African countries emerged from many decades of colonial rule after a long and arduous struggle.

Afterwards, however, the dark cloud of colonialism still shadowed the continent with many of these countries plunged into turbulence due to historical issues such as boundary demarcation, tribal and religious conflicts left by Western colonialists.

Such factors as the imitation of the western political system, the lack of governance capacity by various African governments, and the intervention and manipulation of foreign forces also fueled the turmoil. 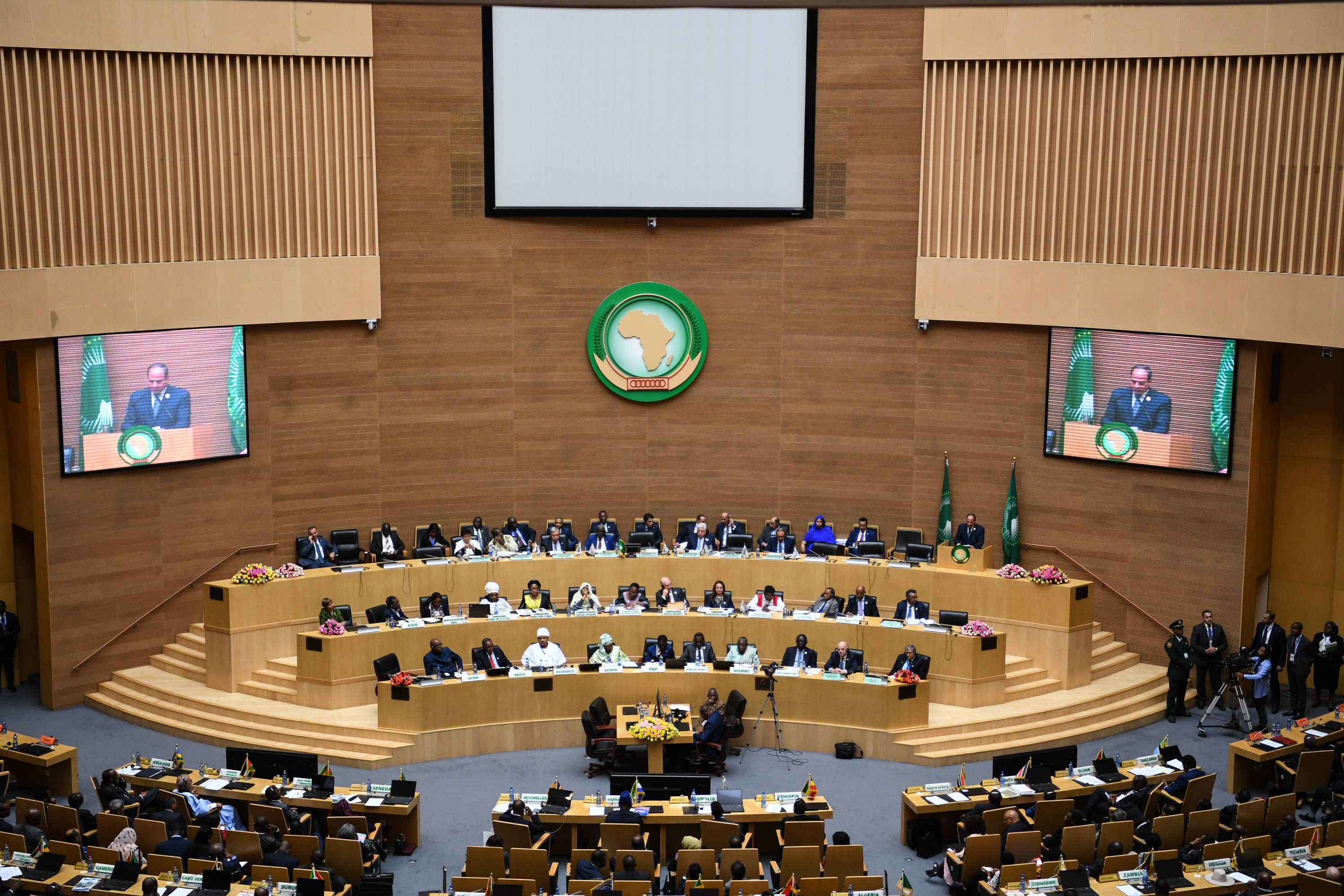 Photo shows the scene of the 32nd African Union (AU) summit of heads of state and government in Addis Ababa, Ethiopia, on Feb. 10, 2019. (Photo: Xinhua)

The launch of the African Union in 2002 marked a milestone in Africa's journey towards regional and continental integration, after which Africa has achieved unprecedented progress through internal cooperation and self-reliance, gradually stabilized its political situation and risen as one of the fastest-growing regions in the world.

A research book issued by the Chinese Academy of Social Sciences said that electoral chaos in African countries has declined significantly since 2010. With increasing political stability, the vast majority of African countries increased their global competitiveness between 2011 and 2016.

On May 31, 2017, the first passenger train with a Kenyan flag painted on its front departed from Mombasa West Station amid loud whistles, signaling that the Mombasa-Nairobi Standard Gauge Railway (SGR), designed and constructed by Chinese enterprises, was completed and opened to traffic.

Unlike the old meter gauge railway, which served the interests of colonialist powers, the 470-km SGR, the largest infrastructure project since Kenya's independence, has created 46,000 jobs for the locals and trained 1,600 railway professionals.

The two railways across Kenya bear witness to the profound changes that Africa has been undergoing over the past century, a microcosm of the reshaping of Africa's relations with the world.

In recent years, developing countries, as a group, have risen to gain increasing prominence in the world, creating conditions for Africa to accelerate its modernization by leveraging the capability of emerging economies.

Ethiopia, the second most populous country in Africa with about 100 million inhabitants, was once one of the least developed countries in the world. But from 2005 to 2016, the country's economy grew at an average annual rate of 10.8 percent. 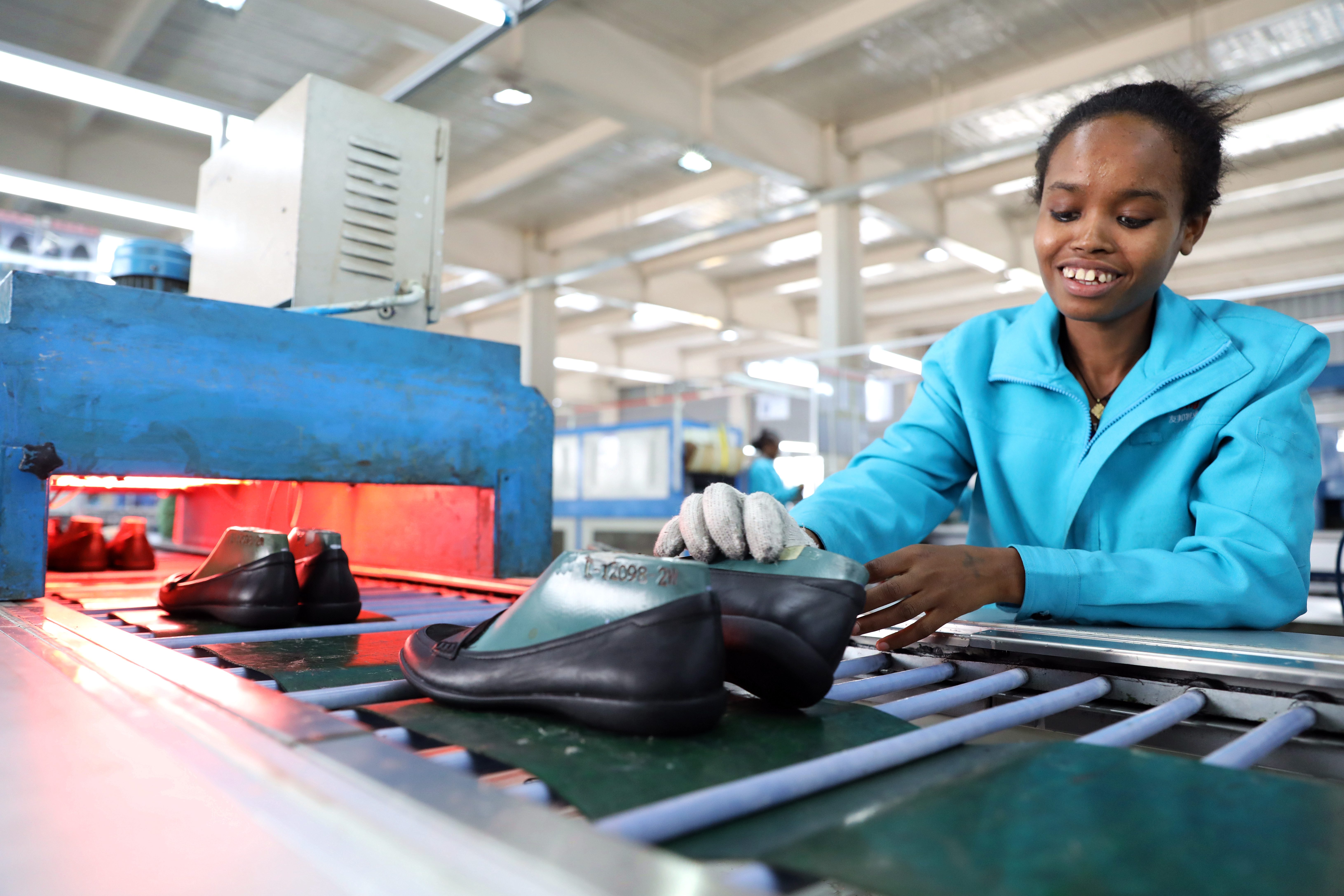 Such impressive achievements cannot be scored without the efforts of the Ethiopian government and people, and they also benefit from the industrial parks and infrastructure projects built with the help of China, demonstrating Ethiopia's willingness to learn from China's development experience.

China has been the largest trading partner of Africa for 10 consecutive years, with an accumulated investment of over 110 billion U.S. dollars in the continent.

African leaders in July officially launched the operational phase of the African Continental Free Trade Area Agreement, a move aimed at charting the path of development for the continent.

Facing both challenges and opportunities brought by the future, Africa is tasked to seize the opportunity provided by the changing international circumstances to amplify Africa's voice internationally, ensure long-term social stability and sustained economic development and further improve state governance and eliminate corruption to the satisfaction of their people.

Such proposals to promote international cooperation as the China-proposed Belt and Road Initiative have facilitated Africa's economic and trade relations with emerging economies.

"Africa has the youngest population. It's the future of the world. By some count, by the end of the century, one in three people will be Africans in the world," said Cobus Van Staden, a senior researcher on China-Africa at the South African Institute of International Affairs.

"Africa should have a much bigger say to where the world is going," he said. "The only way for Africa to gain more of a say is to take a large part of the economy. Growth is incredibly important."