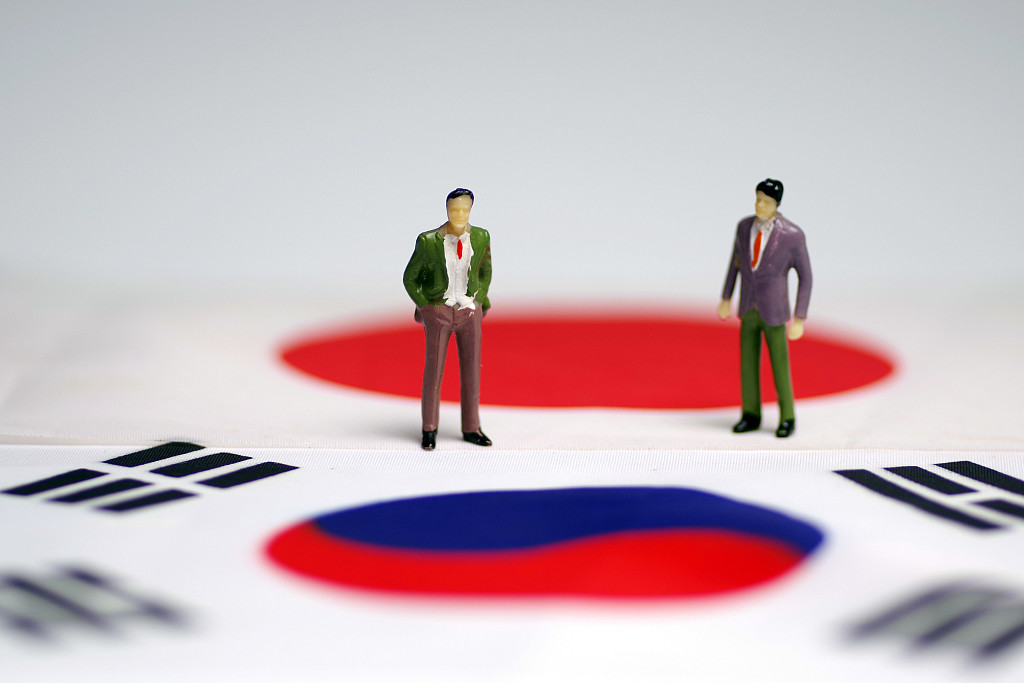 TOKYO, Aug. 28 (Xinhua) -- Japan on Wednesday removed South Korea from its "whitelist" of nations entitled to simplified export control procedures as planned, further raising the stakes in a bitter diplomatic row between the two neighbors that encompasses issues of history and trade.

The removal of South Korea from the list, the first time Japan has revoked a countries' trusted trade status, came into effect at midnight and followed the necessary completion of domestic procedures.

"We will carry out the plan (to remove South Korea from the whitelist)" Japan's Trade Minister Hiroshige Seko told a press conference, saying the move was not aimed at hurting the South Korean economy.

"This is a domestic decision aimed at implementing the appropriate export controls. It's not meant to impact relations between Japan and South Korea," Seko said.

The latest measure by Japan, amid sinking ties between both countries, was approved by the cabinet of Prime Minister Shinzo Abe and means South Korea will no longer enjoy minimum trade restrictions on sensitive goods including electronic components, and Japanese companies must receive case-by-case approval from the Ministry of Economy, Trade and Industry of Japan before such goods can be exported.

Seko maintained that the move by Tokyo was not aimed at restraining trade or supposed to damage bilateral ties between both countries, although observers have noted that bilateral relations have already plunged to new lows in recent times amid an ongoing labor dispute and Japan's previous tightening of export control regulations.

Japan, early last month, tightened regulations on its exports to South Korea of three materials vital to make memory chips and display panels, which are mainstays of the South Korean economy, in a further escalation of souring ties between both parties.

South Korea has been on the whitelist since 2004 and has been guaranteed preferential treatment in terms of importing certain products from Japan.

Chief Cabinet Secretary Yoshihide Suga, Japan's top government spokesperson, has said that Japan will now deal with South Korea the same way it treats other countries in the region.

Suga previously reiterated that Japan believes that it is an appropriate step from enforcing effective export controls to remove South Korea from the white list.

Up until South Korea's removal, Japan had a total of 27 countries or regions on its whitelist, including the United States, Britain, Germany, Australia, New Zealand and Argentina, and whitelisted countries can, through simplified procedures, receive products exported from Japan that could be potentially be diverted for military use.

In order to then export the products to countries not on the whitelist, the countries only need to obtain approval from Japan's trade ministry.

The South Korean government had urged Japan not to proceed with its removal from the whitelist, which it estimates could have a negative bearing on more than 1,000 items in key industries spanning the auto and petrochemical sectors.

Experts close to the matter have said that the measures could adversely affect both South Korean manufacturers and Japanese exporters as their supply chains are closely connected.

South Korea, for its part, has decided to take Japan off of its own "whitelist" of trusted trade partners and announced tighter restrictions for importing coal ash and some waste recycling materials from Japan.

Japanese Defense Minister Takeshi Iwaya said the decision by South Korea was "disappointing" and he believed that the present security environment had been "completely misread" by South Korea.

Iwaya added that Japan will continue to ask South Korea to "reconsider" its decision not to extend the GSOMIA.

The GSOMIA pact between both sides, signed in 2016, has enabled the two neighbors to share military information and has helped both sides to counter potential regional threats.

Japanese Prime Minister Abe, for his part, said that recent moves by South Korea, including the rulings by South Korean top courts last year ordering Japanese firms to pay compensation to forced laborers during Japan's colonial rule of the Korean Peninsula, had damaged trust between the two countries.

Despite bilateral relations sinking to their lowest level in recent years amid wartime, trade and now military information sharing issues, Abe said Japan had been trying to deal with the situation to maintain relations with South Korea at a functional level "so as not to produce a negative impact on cooperation between Japan, the United States and South Korea, in light of the current security situation in Northeast Asia."

The latest escalation by Japan comes amid an ongoing wartime labor dispute that Tokyo believes Seoul has not cooperated in trying to resolve bilaterally or by way of the establishment of an arbitration panel involving a third party, which has spilled over into trade and now intelligence sharing disputes.

The Japanese side initially believed Seoul had intentionally missed a deadline to establish an arbitration panel to settle the dispute over wartime labor.

Japan had tried to maintain that the initial tighter export controls of some materials used in high-tech products were not in retaliation for South Korea's mishandling of the arbitration situation, and under the new restrictions, Japanese manufacturers now have to file individual applications for exports to South Korea of fluorinated polyimide, hydrogen fluoride and resists.

These products are commonly used in smartphone displays and chips, mainstays of South Korea's tech-forward economy and integral to some key supply chains that flow from Japan and through South Korea onward.

Economists have pointed out that due to the interconnectedness of the supply chains, while South Korean chipmakers like Samsung Electronics Co. and SK Hynix Inc. would likely be affected, Japanese exporters could also take a hit.

South Korea's top court ordering some major Japanese firms to compensate South Korean plaintiffs over forced wartime labor during Japan's 1910-1945 occupation of the Korean Peninsula, with lawyers being allowed to seize the assets of some Japanese firms, initially raised the ire of the Japanese side.

Japan maintains the matter of compensation for wartime labor was "finally and completely" resolved under the pact.