BRI NEWS Spotlight: Why China and Africa are destined for a shared future

Spotlight: Why China and Africa are destined for a shared future 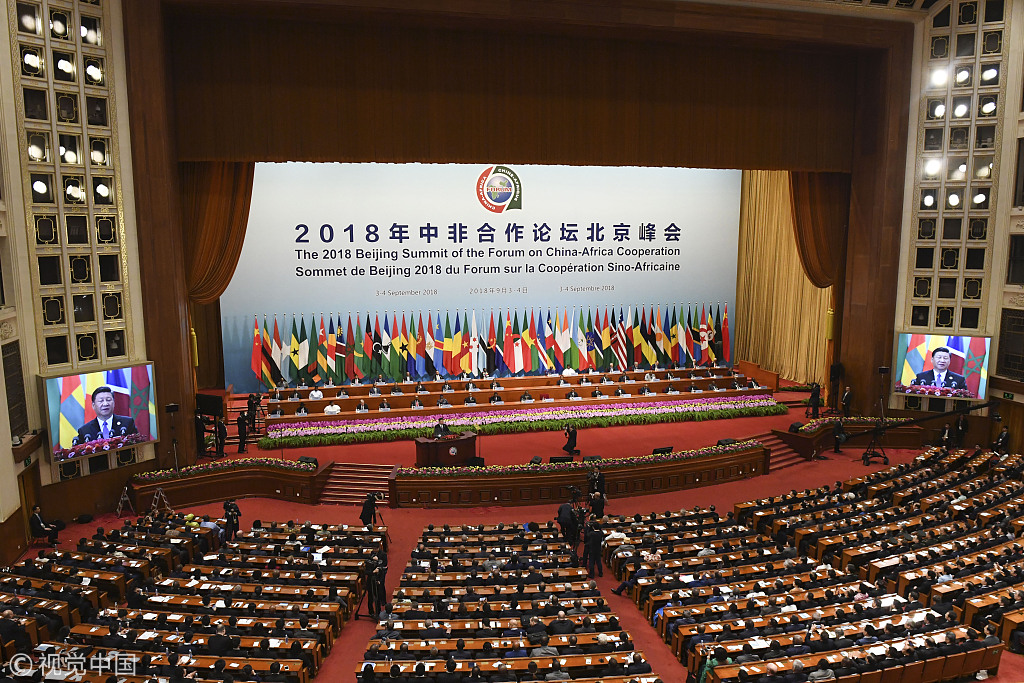 The opening ceremony of the Forum on China-Africa Cooperation at the Great Hall of the People on September 3, 2018 in Beijing, China. (Photo: VCG)

BEIJING, Sept. 4 (Xinhua) -- Leaders of China and Africa have gathered here once again to explore new opportunities for mutually beneficial cooperation and reinvigorate plans to build an even brighter future together.

Chinese President Xi Jinping outlined a blueprint on Monday at the opening ceremony of the 2018 Beijing Summit of the Forum on China-Africa Cooperation (FOCAC), marking a new starting point for friendly engagement between the largest developing country and the promising continent.

African leaders said they will align their countries' development strategies with the China-proposed Belt and Road Initiative in order to boost development synergy, promote win-win cooperation and build a closer partnership with China on the basis of equality and mutual respect.

FOCAC has provided a platform to boost the Africa-China partnership in the past 18 years, which will lead to closer ties and more achievements, African leaders said at the High-Level Dialogue Between Chinese and African Leaders and Business Representatives, held on the sidelines of the summit.

The Beijing summit "reflects the unique as well as the strategic nature of our partnership," South African President Cyril Ramaphosa, who co-chairs the two-day summit with Xi, said at the dialogue, which is also the Sixth Conference of Chinese and African Entrepreneurs.

The Africa-China partnership "facilitates the realization of Africa's developmental aspirations reflected in Agenda 2063 through pragmatic collaboration in the quest for win-win cooperation," he added.

"I am convinced that the FOCAC has taken the comprehensive strategic partnership journey further and to higher levels," Ramaphosa said.

He noted that China has put forward the important Belt and Road Initiative, while the African Continental Free Trade Area is gradually taking shape and African countries are making progress in seeking development paths that suit their national conditions.

Such moves will help upgrade China's trade and investment cooperation with North African as well as other African countries, he added.

China supports African countries in jointly building the Belt and Road to share the win-win outcomes, Xi said at the dialogue.

He said in his keynote speech that China stands ready to strengthen comprehensive cooperation with African countries to build a road of high-quality development that is suited to individual national conditions, inclusive and beneficial to all.

Since FOCAC was established in 2000, China together with various African countries have been developing their relations on the basis of equality and mutual respect. This year's summit is the third of its kind in FOCAC history, with the previous two meetings being held in Beijing in 2006 and Johannesburg in 2015.

At the opening ceremony of this year's summit, Xi pointed out that China follows a "five-no's" approach in its relations with the countries of Africa: no interference in the development paths of individual countries; no interference in their internal affairs; no imposition of China's will; no attachment of political strings regarding assistance; and no seeking of selfish political gains in investment and financing cooperation.

"China follows the principle of giving more and taking less, giving before taking and giving without asking for return," Xi said.

Rwandan President Paul Kagame, who is also rotating chair of the African Union, said China's engagement in Africa has been "deeply transformational both internally and with respect to Africa's global position."

In his speech at the opening ceremony of the summit, he noted that Xi has paid four visits to Africa as president, reaching every major region of the continent as well as countries of different sizes and economic profiles.

"This commitment speaks to the vigor and reliability of our relationship," Kagame said. "China has proven to be a win-win partner and sincere friend."

Speaking on behalf of East Africa, Djiboutian President Ismail Omar Guelleh said at the business dialogue that the Africa-China partnership, in contrast to some allegations, is based on win-win cooperation and mutual benefit.

Africa has found in China a partner who believes in the continent's ability to lift its people out of poverty and achieve economic independence and self-sufficiency, Guelleh said.

"China's investment and involvement in East Africa date back to more than 40 years ago," he added, "which demonstrates not only the depth of our friendship, but more importantly, how China, even when it was trying to develop itself and lift its people out of poverty, always extended the hand of friendship to Africa and believed in our success."

China-Africa cooperation has yielded fruitful results in the past years. Leaders of the two sides said Monday that they expect more achievements through win-win cooperation in the future.

Bilateral trade is registering fast growth. China has been Africa's largest trading partner for nine consecutive years. Trade between China and Africa increased seventeen-fold in value from 2000 to 2017. In 2017, trade volume surged 14 percent year on year to 170 billion U.S. dollars. In the first half of 2018, the figure jumped 16 percent to nearly 100 billion dollars.

Meanwhile, China's investment in Africa surged by more than 100 times in value from 2000 to 2017. By the end of 2017, Chinese investment of all kinds in Africa totaled 100 billion dollars, covering almost every country on the continent.

Meanwhile, China backed the initiatives up with a financing package of 60 billion dollars, which came on top of the 60-billion dollars in funding support China pledged to provide Africa at the 2015 Johannesburg summit.

China has honored its 2015 promise, with the funding having been either delivered or arranged, Xi said.

Through FOCAC and other forums, China has worked to ensure that Africa's development is prominent on the international agenda, said Ramaphosa, South Africa's president.

"Building on these remarkable achievements, we welcome the announcement ... by President Xi of new FOCAC initiatives that will have a significant and lasting impact on peace, stability and sustainable development on the African continent," Ramaphosa said.

China and Africa have long formed a community with a shared future. Together, their relations will become a model for building such a community for all of humanity, Xi said.