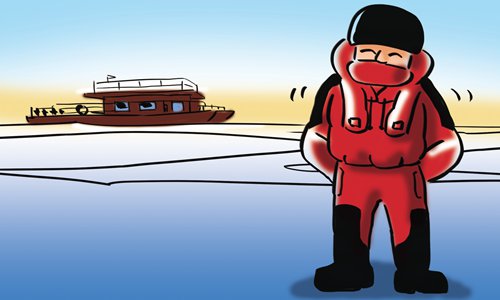 The white paper is to "make the positioning clear." China is an important stakeholder in Arctic affairs as the natural conditions of the frigid zone and their changes have a direct impact on China's ecological environment and economic interests. To deal with the challenges, China will make efforts to be an active participant, builder and contributor in Arctic affairs.

As a near-Arctic country, China will respect the legitimate rights and interests of the Arctic states and non-Arctic countries in the region, and the tradition and culture of indigenous people when carrying out activities there.

The white paper sets out goals to promote the building of a community with shared future for mankind and the Arctic's sustainable development. China hopes to establish a new type of international relationship based on mutual respect, fairness and cooperation, and properly handle issues like the increasing demand for resources and environment protection. By making its goals clear, China hopes to work with all parties to facilitate connectivity and sustainable development of the region, and to reduce skepticism about its intentions so as to make more friends in the region.

The white paper says China will participate in Arctic affairs in mainly five fields: scientific research, environment protection, resource utilization, law-based governance and international cooperation, and maintaining a peaceful, secure and stable Arctic order. This shows China's focus and boundary in taking part in Arctic affairs. Currently it will focus on research and environment protection, which will lay the ground for the participation of Chinese institutions and companies.

The white paper mentions China's intention to work with all parties to jointly build a "Polar Silk Road," extending the Belt and Road initiative to the Arctic region. This provides a solution to the problem of infrastructure shortage in the area including ports, logistics, communication facilities and navigation, which constrains the exploitation of resources in the Arctic shipping routes. In this way, China can also deepen cooperation with other stakeholders to develop common interests and achieve results.

The white paper says China considers the UN Charter and the United Nations Convention on the Law of the Sea (UNCLOS) as the core of the Arctic international governance system. This is the legal foundation for China to participate in Arctic governance, protect its rights in respect of scientific research, navigation, overflight, fishing, laying of submarine cables and pipelines in the high seas and other sea areas in the Arctic Ocean, and rights to resource exploration and exploitation in the area, through global, regional, multilateral and bilateral mechanisms.

China's rights to participate in Arctic affairs have not been given by any country or international organization. Meanwhile, China will manage its activities in the region in keeping with law and set high standards for managing Arctic affairs.

The white paper grabbed massive international attention. Some media outlets showed suspicion about China's participation, worrying that it may start military deployments in the Arctic and use the "Polar Silk Road" to control the area. Such skepticism is probably rooted in the lack of understanding of China's Arctic policy as well as its activities in the region, or because these media outlets are used to seeing China as a threat.

Actually, China's aim to publish the white paper is to make its position clear. The Arctic policy will guide Beijing to participate in Arctic affairs via the principle of "respect, cooperation, win-win results and sustainability." And China will pay due regard to the interests of other countries and the broader international community when it pursues its own interests.

China needs to expand Arctic activities, has rights to participate in Arctic affairs and is capable of promoting exploitation of resources in the region. What's more, international society needs China's wisdom and power to deal with the threats and challenges in the region. Hence, China's participation will bring new drive and opportunity to the area, not resistance or threat