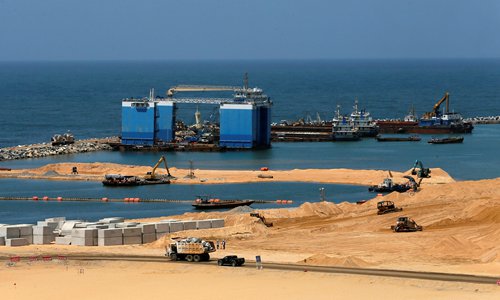 Big data showed that the China-proposed Belt and Road initiative (BRI) has made solid progress in increasing connectivity among member countries and regions, and officials and experts noted that technological innovation will take the initiative to the next stage.

According to the 2018 Big Data Report under the BRI, the initiative's influence has further increased, its cooperation range has been expanded and connectivity levels among B&R members have improved significantly.

Compiled by the national big data center of the BRI under the State Information Center, and covering 71 economies along the routes, the report was officially released on Wednesday at the 2018 Summer Davos Forum.

In 2017, China's trade with countries and regions along the routes of the BRI increased 13.4 percent year-on-year, the report showed, indicating that trade connectivity between China and countries along the BRI has been increasing in a stable manner.

With the initiative entering a new stage, officials and experts noted that innovation will play an even more significant role in the future.

The BRI has innovative ideas, including policy communication mechanisms among countries and regions along the BRI routes, which have created a good foundation for enterprises in different countries and regions to conduct economic and trade activities, He Lifeng, chairman of the National Development and Reform Commission, said at the forum.

He noted that the infrastructure connectivity initiatives in the BRI is also a new idea in global cooperation.

Apart from government activities and policies, innovation along the BRI routes is also being driven by Chinese businesses.

For example, with a presence in many of the economies involved, including Thailand and Vietnam, China-based Trina Solar has been among the most active in pushing for the BRI.

In addition to selling products, the company bets on localizing its smart energy solutions and investing in research and development of local technological innovations, Chairman Gao Jifan told the Global Times during the forum, speaking of efforts to rev up local innovation and accelerate the energy revolution on the local level.

Li Xiaojia, CEO of Hong Kong Exchanges and Clearing, which runs the Stock Exchange of Hong Kong, told the forum that financing for the BRI is also an important area where people should have innovative ideas.

Li said it will be hard to make BRI projects sustainable without financial returns.

"Money from (State-owned enterprises) alone won't be enough. That has to be coupled with other financial sources... the stock market, the financial market, the government," Li said.

"If developing countries invest their money in the Hong Kong market, values will rise, and this will offset their debt and they can build more infrastructure," Li noted.

The report also showed that financing connectivity is where China and other member countries and regions should do more.

For example, there's the energy sector. Gao said some countries along the routes that are hoping to tap into Chinese products and solutions to improve power supply and energy efficiency require additional financial support. This reality, added to concerns over local political stability, local legal frameworks for investor protection and other issues, calls for coordinated action to assure businesses that their investments could be genuinely financial viable, said Gao.