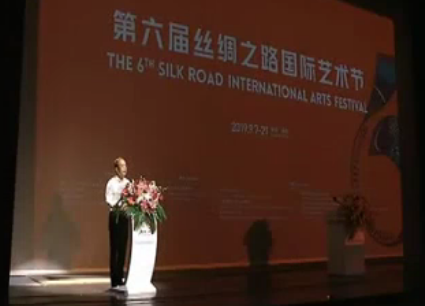 The opening ceremony of the 6th Silk Road International Arts Festival was held on September 7 in Xi'an, northwest China’s Shaanxi Province. Zhang Xu, Vice Minister of Culture and Tourism, attended the opening ceremony and delivered a speech. Niu Yibing, Standing Committee of the Provincial Committee and Minister of Propaganda, acts as host of this ceremony. Attendees also include Fang Guanghua, Vice Provincial Governor, Bernard Wassanta, Permanent Secretary of the Ministry of Housing and Culture of Sri Lanka, and Nadim Shafaqi Malik, Secretary-General of the Ministry of Historical Heritage of Pakistan.

“The Belt and Road Initiative carries people’s aspiration for common development and prosperity. It gains worldwide recognition and attracts many countries to participate in.” Zhang Xu congratulated at the ceremony.

The artists, who are from 116 countries, will bring a artistic feast to the audience. At the opening ceremony, "Yang Men Female General", a Qin Opera drama, performed by artists from Shaanxi Academy of Traditional Opera, has received applause by the whole audience.