The takeout food leads the night economy in Xi'an 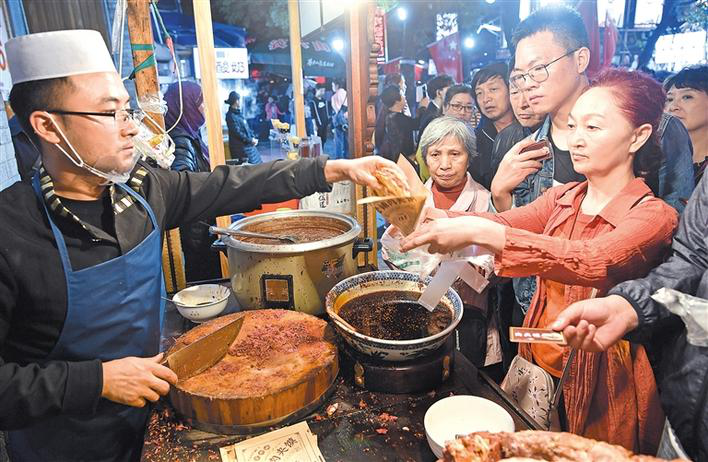 According to the data of Shaanxi Culture and Tourism Department, in the first half of the year, Shaanxi received about 370 million tourists, with a total tourism income of 373.631 billion yuan. According to statistics, in Beijing, Shanghai, Guangzhou, Shenzhen and other cities, the nighttime economy has accounted for 50% of all-day service business. The business income of stores occurred after 6 PM, accounting for 40% to 80% of all-day sales. Food-driven consumption is the impulse.

Xi'an is not only famous for historical sight spots, but also famous for local food. Here is an interesting statistics of takeout platform, the data shows during the National Day holidays, the most popular food is Rou Jia Mo, which is also called Chinese Hamburger, ranks the top 3 on online takeout food platform.

What do you have for dinner? Eating barbecue and drinking beer in the night market are not the most popular style among young people in Xi'an. With the efforts of the delivery staff, crayfish and hot pot can be delivered to the door at any time. According to the data from He Ma Xian Sheng, which is a huge chain fresh market in China. Since summer vacation, In addition to seasonal fruits such as durian, cherry and Dali jujube, the sales of crayfish and beer have increased significantly in the evening, because crayfish is the most popular food among night diners. He Ma Xian Sheng prepare the local flavour crayfish in order to satisfy customers' tastes.

On September 3, Meituan takeout platform showed that the number of takeout order among Xi'an white-collar ranked 6th in the country. According to another takeout platform ele, the amounts of night orders in 2019 increase nearly 60% than last year, accounting for 9% of the whole day order. Compared with other cities, people in Xi'an prefer to order takeout before 10 PM. The proportion of orders from 9 PM to 10 PM in Xi'an is 4% higher than others. At the same time, big data shows that more and more people prefer to place orders after 10 PM.

The interesting thing is that Xi'an people are crazy about bun and meat. The most popular food are barbecue, hamburger & fried chicken, especially Rou Jia Mo and hot spicy soup, which is the highest number of orders in platform. It means people in Xi'an are fascinated about local food.

Looking to the position, the most popular areas are Yanta, Weiyang and Beilin District, due to the huge population and plenty of restaurants. The restaurants near the Sa Jin Qiao, Lianhu District make higher sales because there are full of local tastes arounding here.

Zhang Tao, an associate professor at Xi'an University of Finance and Economics, says that young people are the main target of night consumption, and food, entertainment and leisure are the main needs. Many young people prefer to have dinner and drink outside, in order to attract customers, businesses are launching a variety of delicacies and drinks, as well as various performances. For example, Yongxing Fang, Big Wild Goose Pagoda and Xiaozhai shopping street are the most popular place. With the convience of public transporation and development of commercial facilicities in Xi'an, the night economy will keep rising and become an icon in the world.