Bell Tower, an ancient style architecture in center of Xi'an city, was originally built in the 17th year of Hongwu Period of Ming Dynasty (AD 1384). It is at the entrance of St.Guangji on West Street, which used to be the center of Chang'an City in Sui and Tang dynasties. After renovation throughout dynasties, the bell tower stands firmly as centeral landmark of Xi'an City at the intersection of the four main roads.

Bell Tower in the setting sun

The big iron bell hanging in the northwest corner of the bell tower, cast by Zonghua in Ming Dynasty (AD 1466), weighs 13600 catties. The bell in the tower tolls the hour of the day, hence the name Bell Tower. 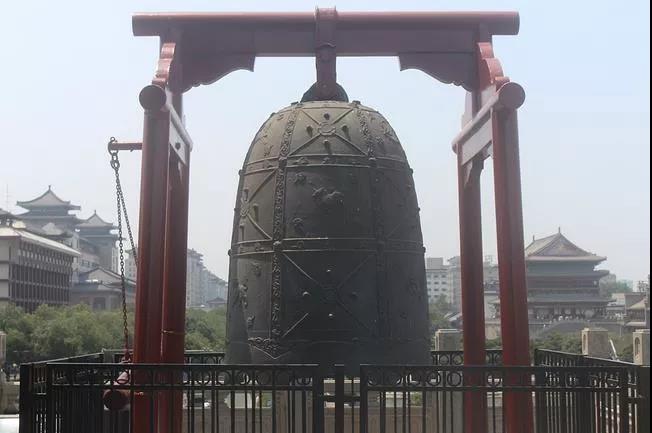 At the same time, the Bell Tower serves as command center in urban security defense, and it is also part of city image. The bell tower is 36 meters high with a square pedestal. The green-brick pedestal is 35.5m long and 8.6m high, covering an area of 1377.4 square meters. 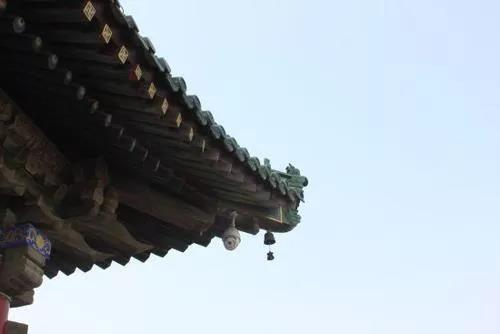 There are wooden ladders in the southeast corner of the building. The algae well is decorated with more than 180 kinds of folk flower patterns. There are 64 anecdotes of ancient allusions on the door, which are extremely exquisite. At the top stands a large domes about 5 meters high, glittering and brilliant.

The whole building is simple, elegant and solemn, and it is an ancient building with typical Ming Dynasty architectural style.

After the founding of the new China, the ancient building has been renovated for many times. In August 1956, it was announced by the Shaanxi Government as the first batch of key cultural relics protection units, and in November 1996, it was promulgated by the State Council as a national key cultural relics unit. 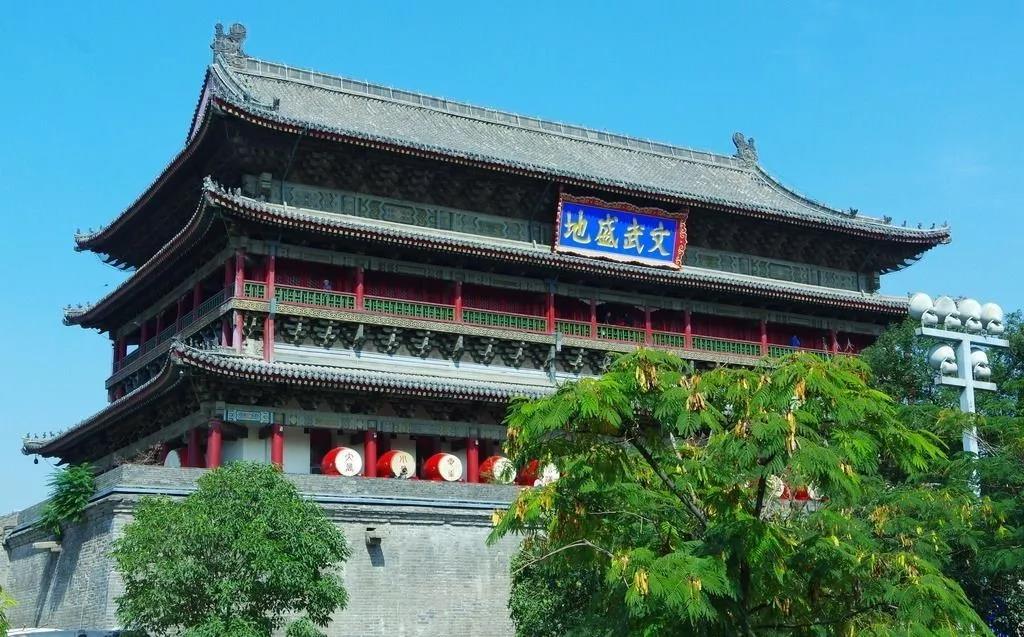 Drum Tower, located 75 meters north of Gulou cross on the west street, is close to section of Bei Yuan Men Street and 250 meters east from the bell tower. There is a big drum on the north shelf of the building, known as "Wentian Drum". When the drum is beaten in the evening every day, it plays a "bell and drum symphony", so it is called the Drum Tower. 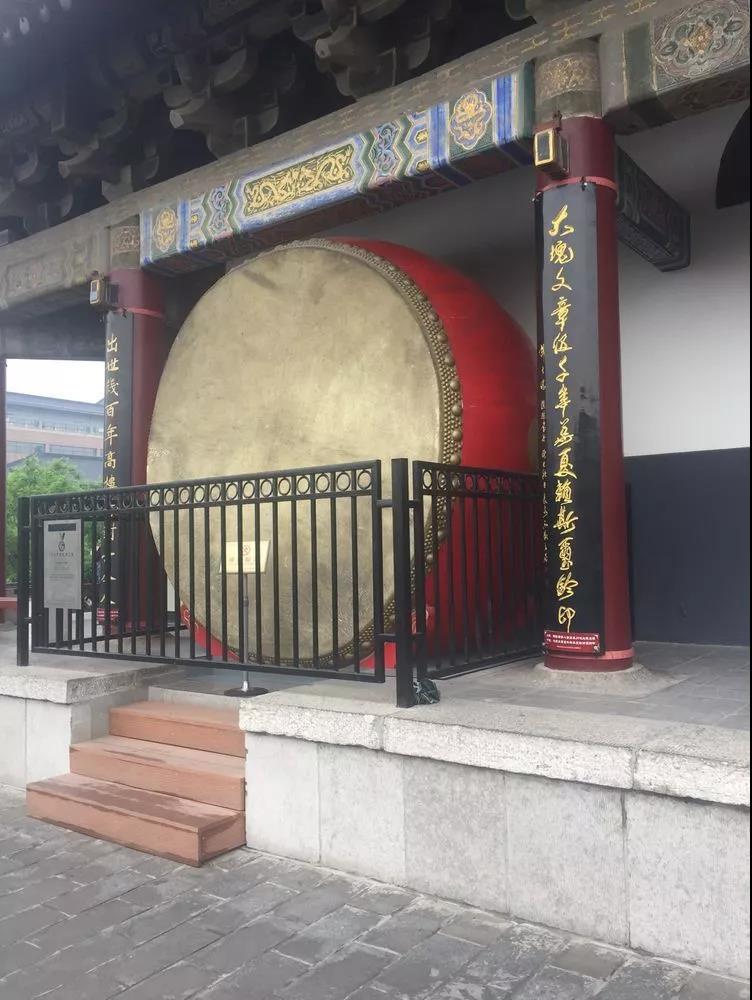 Sometimes the drum tower is also used to give an alarm, which plays a liaison role in the prevention and order of the city, and at the same time, it is also a building that beautifies the urban landscape. The drum tower is independent, the pedestal is rectangular, the east and west is 52 meters long, the north and south width is 37 meters, the seat is 9 meters high, built with stone green brick, and covers an area of 1924 square meters. There are wooden ladders on the west side of the building that can circle up. The outer eaves are decorated with bucket arches,  and the layers are clear with color painting. 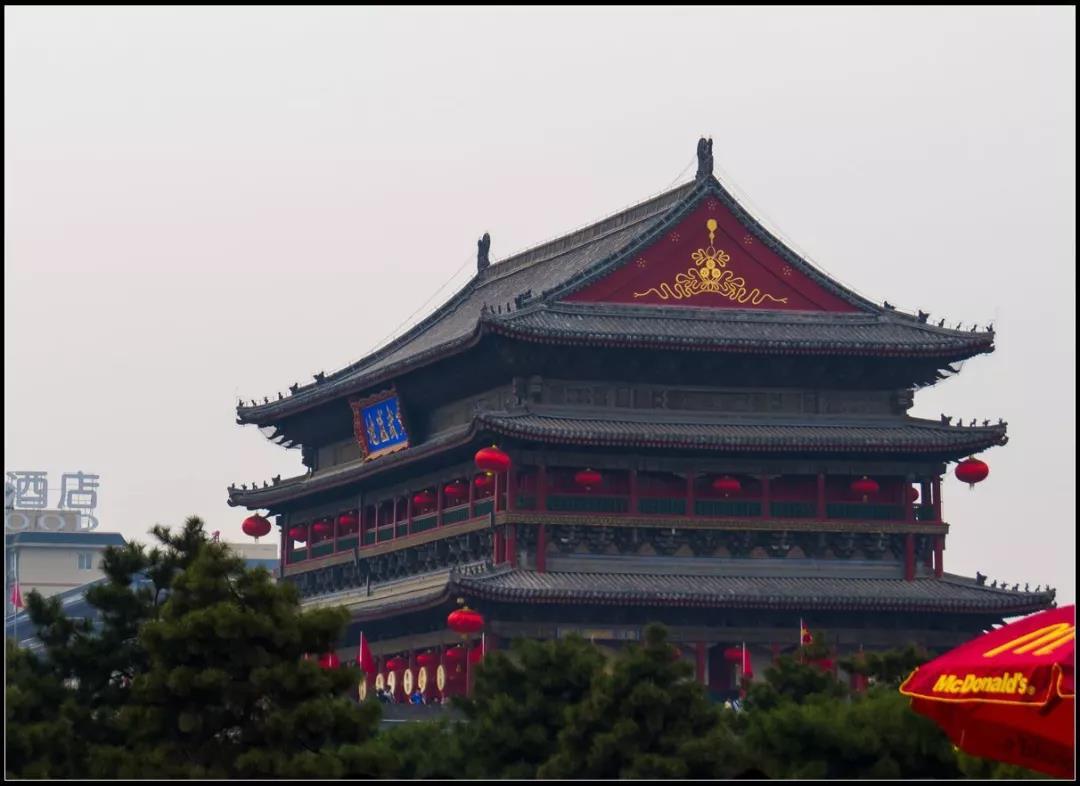 After the reconstruction in the fifth year of Qianlong period, Emperor Qianlong gave a four-character inscription "Wenwu Shengdi", which means place of civil and military, and it was copied by Shaanxi Governor Zhang Jiejin. Li Jiukuan, wrote another four characters "Shengwen Yutian"(means sounds up to sky), hanging under the north eaves. All eight large characters are affixed to gold convex bodies. 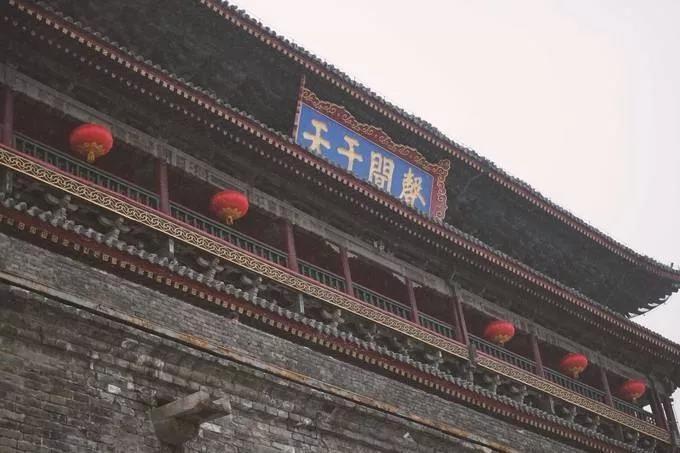 During the WWII War of Resistance against Japan, the whole building was damaged. In 1952, the people's government of Xi'an City carried out a thorough renovation of the Drum Tower. Lightning proof equipment was added in 1954. The roof was renovated in 1958. Two plaques in Drum Tower were removed and burned at the beginning of the Cultural Revolution in 1966. The new two plaques were made exactly as they were and hung on the original eaves 28 meters above the ground on the north and south sides of the Drum Tower on April 23, 2005.

Drum Tower was listed as a national key cultural relics in November 1996.