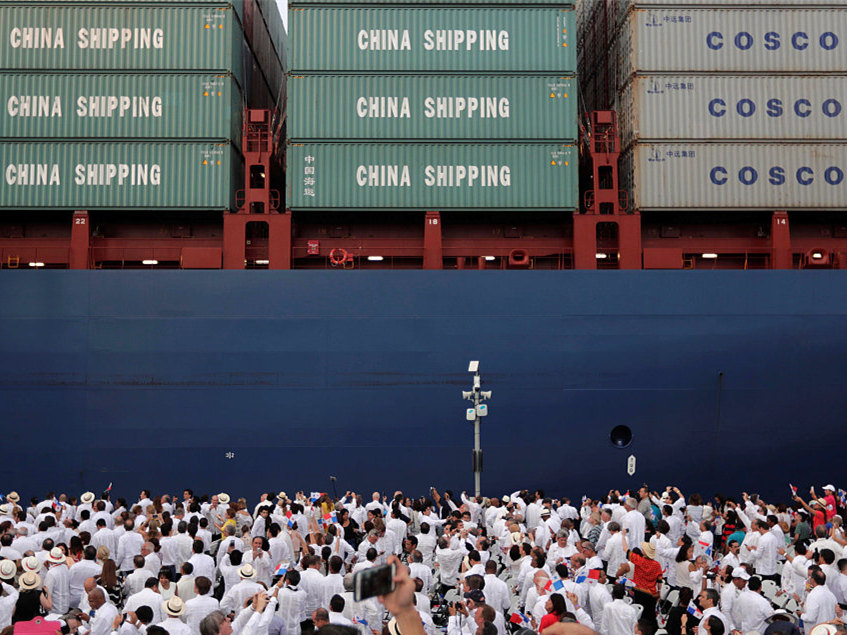 People wave at a Chinese COSCO container vessel , as it arrives to Cocoli locks after crossing the Panama Canal to the Pacific side, during its first ceremonial transit of the new Panama Canal expansion project in Cocoli on the outskirts of Panama City, Panama June 26, 2016. (Photo: VCG)

The historical Manila-Acapulco Galleon Trade route reaching as far as Chinese ports until the early 19th century brought many changes to local economies and life, and left traces that can still be seen today in Peru, Panama, Chile, Guatemala, Ecuador and Argentina.

By the end of the 18th century, brisk trade had turned Acapulco from a village of less than 250 households into a port of more than 4,000 inhabitants, according to historical records. A Spanish parliament document showed processing and weaving raw silk from China created 14,000 jobs in Mexico in 1637 alone.

Today, history seems to be repeating itself as some Latin American countries are becoming a natural extension of the 21st Century Maritime Silk Road, which is part of the China-proposed Belt and Road Initiative (BRI). New growth opportunities are emerging, promising prosperity for all in this heavily interdependent world.

The initiative launched in 2013 focuses on building infrastructure and trade networks to seek common development and prosperity.

On the blueprint of China's Landbridge Group is an ambitious investment project to expand Panama's largest port Margarita Island into a global container hub. This is also the vision that attracted many locals to work for the project, among them Cesar Zebede.

Zebede is now busy working for the Chinese company at the construction site of the port's expansion area. After its upgrade, the Atlantic port at the mouth of the Panama Canal will become the only port there to boast 150,000-ton container berths.

The port located in Panama's Colon free trade zone will boast three berths designated for super-Panamax ships, and to have an annual handling capacity of 5 million twenty-foot equivalent unit (TEU) cargoes when the first phase of the project is completed, and 11 million TEU cargoes upon completion.

Zebede said that despite the language barrier and a different cultural background, he has had no difficulties in adapting to the Chinese company's working environment. He is very much impressed with the work culture there, which encourages innovation, efficiency, standard operation, environmental friendliness and social engagement.

It is also wonderful that the Chinese people respect the local staff, he said.

"During the time of the World Cup games, the Chinese boss even gave us breaks when the Panamanian team played, and watched the game together with us, cheering for our team," said Zebede.

For Argentine engineer Federico Carrera, it is very good to see new trains running fast on new tracks in the pampas lowlands of Argentina. He said the Argentine people always had a special relationship with trains.

"Argentina is a country grown from railways. Where there is a railway, there is a town. And the outdated railways are a mirror of economic slowdown and difficulties," he said.

"Cooperation with China is helping the country out of its plight, and I think upgrading the rail transport system is the first step to facilitate trade. This is a shortcut to bring back the good old times," he said.

In Argentina, a well-known world granary, the obsolete railways linking the grain-producing areas and ports have proved inferior to trucks in transporting big cargoes. The high cost has made Argentina's agricultural products less competitive.

In 2011, the Argentine government announced a plan to upgrade the national railway system. In 2013, China Machinery Engineering Corporation signed a deal to transform the Belgrano railways. The project increased the speed of rail traffic between northern Argentina and the river port Rosario in the east.

"With improved safety and speed, we have clients coming back," said German Hanacek, assistant project manager of the state-owned rail company Belgrano Cargo and Logistics. "When the harvest season comes, there will be a lot more shipments. As usual, wheat and soy beans are transported by train to the port."

Lighting the way to a better life

The Silk Road has never simply been a route that connected lands, but also a catalyst of change in people's lives. The BRI features win-win cooperation and connectivity in many areas, and among the local benefits are more jobs, business opportunities, new technologies, and improved living standards.

Currently, somewhere near Arcos in Brazil's Minas Gerais state, Brazilian workers are building an electric power tower. It is one of the construction sites of the Belo Monte hydroelectric plant, which ranks the second largest of its kind in Brazil and the fourth largest in the world.

Boasting power lines of ultra high voltage direct current (UHVDC), which are among the world's few, the project uses a Chinese-patented UHVDC technology. After completing the project's initial phase, the State Grid Corporation of China is now the only general contractor in the second phase for building power lines of a total length of 2,518 km.

The project completed in the first two phases is expected to ease much of the power shortage in southern and southeastern Brazil, providing an "electricity highway" from the country's south to north to meet the power needs of tens of millions of residents.

Severino Cabral, head of the Brazilian Institute of China and Asia-Pacific Studies (IBECAP), said "The two UHVDC power lines so far completed have resolved the industrial and civil energy crises in eastern Brazil."

"The electric power towers and lines also testify to a close cooperation between our people and the Chinese," he further said.

Aldo Camargo is among the workers at the project site near Arcos. "A Brazilian or a Chinese team? It is hard to say. We hang together, cooperate with and support each other. That ensures our job is done smoothly, and that's why we are successful," he said.

For the Brazilian employees, it has been very encouraging that the Chinese management lets them make many decisions in carrying out the project plans.

"The Brazilians are familiar with local conditions and laws, and they communicate with each other better," said Ju Tao, a Chinese subproject manager. "We do our part only in capital control and strategic planning."