BRI NEWS Trail to Triumph: China at Forty Years of Reform and Opening-up

Trail to Triumph: China at Forty Years of Reform and Opening-up 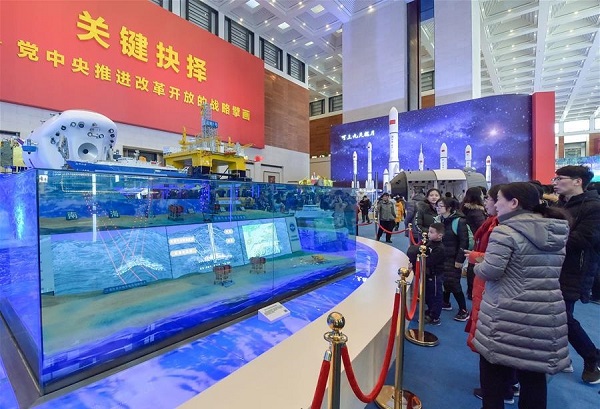 People visit a major exhibition to commemorate the 40th anniversary of China's reform and opening-up at the National Museum of China in Beijing, capital of China, Dec. 25, 2018. The exhibition has received more than two million visitors since its opening. (Xinhua/Li He)

China is ceremoniously celebrating its 40th birthday of the reform and opening-up policy that proved to be the key to success, glory, and dignity for the last four decades.

To say it plainly, China is the only country achieving the height of progress and prosperity through incremental and aligning reform policies spanning over 40 years and that too without infusing or relying on conflicts or "zero-sum" tactics. This is a miraculous achievement in the history of mankind which also extends a universal lesson that the development is not stringed to the loot, pillage, and plunder — the tactics which have been mostly practised and executed by the hegemons of the world.

Sifting through the years back to 1978, China was at a critical juncture of defining its destiny while confronting mammoth challenges of the liquidity crisis, unemployment, poverty, hunger. The opening-up was timely formulated to put the policies straight with a workable solution which proved to be the real launching pad for China's looking ahead to deal with the odds at social and economic fronts. This also reflects that the prerequisite of a visionary leadership is to steer the nation towards the right path to combat its challenges and to attain the zenith of success.

Besides carrying the enduring nature of opening-up, it also effectively ensured the social equality and equity through its trickle-down effects to the masses. Resultantly, China turned around its economy by attaining unprecedented annual growth rate averaging 9-10 per cent from 1978 to 2018 making it a real economic powerhouse of the world. It was not just geographical location and umpteen resources of China but also the dynamic and prophetic leadership which provided the basis for a sustained development backed by social and political structures.

In addition to that, the credit also goes to the unflinching determination of the Chinese nation to attain their destiny. The incredible outcome of the 1978 era can be exemplified from the fact that from 1978-1981, more than 221 million out 250 million were pulled out from the poverty bracket with an astounding rate of 88 per cent. In the succeeding years, poverty line was further dropped down to 6.5 per cent in 2012 which is presently less than two per cent of its total population and is expected to be completely scraped out by the year 2020. Such an economic boom based on its premium objective of providing a better life to its people has never been witnessed elsewhere in the world.

In the following year, many other important decisions, including the elimination of bureaucratic and political obstructions, were made to speed up economic growth.

At the heart of this strategy, the epic project of Belt and Road Initiative (BRI), further stimulated China's openness by sculpting and resurrecting the concept of Globalization and Modernization through positive, proactive, respectful, diplomatic, agile and inclusive modes of Chinese characteristics of serving the developing states all over the world.

To say the least, today China has become the hub of FDI while its entrepreneurs are making huge investments across the continents that speak volumes of its enormous economic outlook at the global level. Despite the fact when other countries of the world were striving to overpower each other, the "China's Miracle" has championed its achievements over the years through its undying resistance while encompassing the world into a single knot. the idiomatic words from President Xi Jinping's speech — delivered at the occasion of celebrating China's reform and opening-up on 18 December — shows firm commitment on part of China to the entire world that "development does not pose a threat to any country… no matter how far China develops, it will never seek hegemony."

(Yasir Masood is a Pakistani researcher who works as Deputy Director Media and Publications at the Centre of Excellence for CPEC and the Lead Editor of the CPEC Quarterly magazine.)