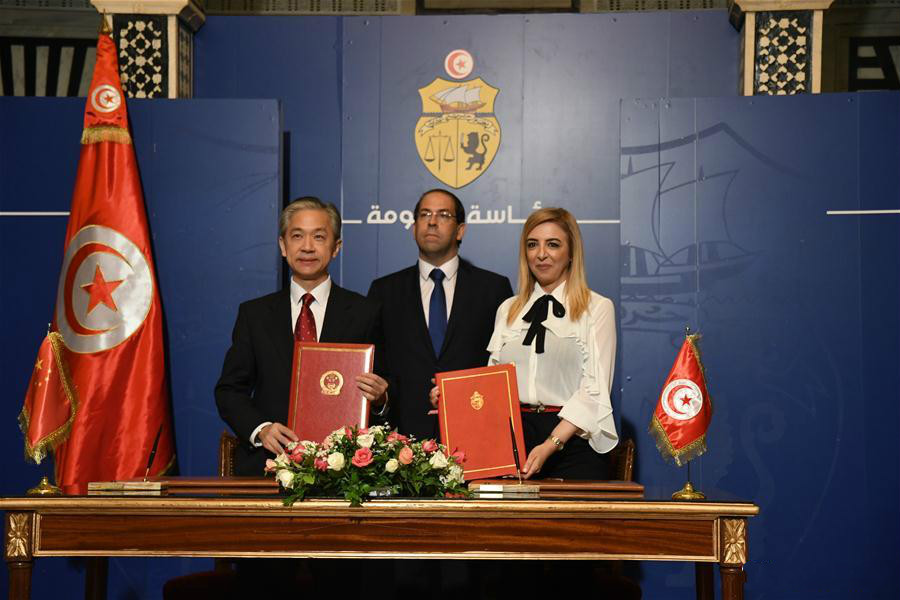 Chinese Ambassador to Tunisia Wang Wenbin (L), Tunisian Prime Minister Youssef Chahed (C) and Tunisian Acting Minister of Health Sonia Ben Sheikh pose for a photo during an agreement signing ceremony in Tunis, Tunisia, on Oct. 8, 2019. Tunisia and China on Tuesday signed an agreement to conduct a feasibility study for the expansion of a new university hospital in the Province of Sfax. (Photo: Xinhua)

TUNIS, Oct. 8 (Xinhua) -- Tunisia and China on Tuesday signed an agreement to conduct a feasibility study for the expansion of the new university hospital in the Province of Sfax.

The agreement was signed by Acting Tunisian Minister of Health Sonia Ben Sheikh and Chinese Ambassador to Tunisia Wang Wenbin in the Government Palace in the presence of Prime Minister Youssef Chahed.

Following the signing of the agreement, Chahed appreciated the cooperation relations between Tunisia and China.

The Sfax hospital is the largest and most long-term project among the Chinese aid projects under construction in Tunisia. The construction was started in December 2016 and its construction area covers about 26,000 square meters. It will be completed by the end of this year.

The Tunisian side hoped to expand the project of the hospital in order to build it as a large-scale general hospital with medical, teaching and scientific research functions.

After the exchange of agreement, the Chinese side will send a team of experts to conduct the feasibility studies.