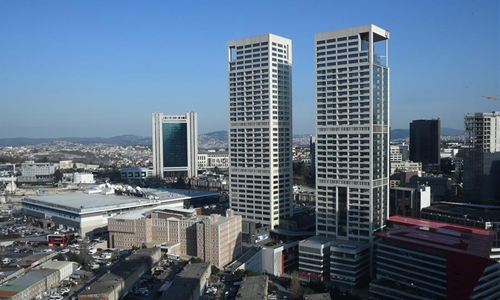 Photo taken on Feb. 10, 2020 shows buildings in the urban area in Istanbul, Turkey. Turkey's economic indicators have seen stronger signals of recovery lately, but they are yet too weak for sustainable growth, experts argued. (Photos: Xinhua)

Turkey's economic indicators have seen stronger signals of recovery lately, but they are yet too weak for sustainable growth, experts argued.
Turkish Treasury and Finance Minister Berat Albayrak recently said the country made a positive start to 2020 in line with the government's targets and projections.
Praising the hard efforts of the government in reducing the soaring inflation rate, Albayrak said Turkey's economy will be ready to achieve a five percent growth in the first quarter of 2020.
After seeing single digits in September and October, the inflation rate plummeted to 11.84 percent last year, from 20.30 percent in 2018.
"Our performance in 2019 was beyond expectations. The full-year growth will come in at an increase of 0.5 percent," he was quoted as saying by the Hurriyet Daily News in the Central Anatolian province of Sivas on Sunday.
Turkey's economic growth sank as low as to 2.6 percent in 2018 after achieving 7.4 growth in 2017. Meanwhile, 2019's third-quarter data revealed a 0.9 percent increase.
Mustafa Sonmez, an economist, noted that the crisis period seen in the country's economic growth has stopped in the third and fourth quarter of 2019, and a relative growth began.
"Last quarter data will be released in March, but most probably, Turkey will complete 2019 with a positive growth rate," he told Xinhua.
Meanwhile, the unemployment rate stood at 13.3 percent in November 2019, with a one percent year-on-year increase, the Turkish Statistical Institute announced Monday. 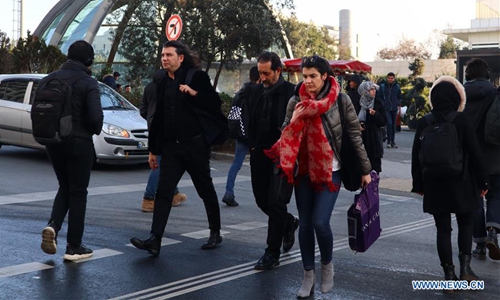 Residents walk on a street in Istanbul, Turkey, Feb. 10, 2020. Turkey's economic indicators have seen stronger signals of recovery lately, but they are yet too weak for sustainable growth, experts argued.

The data also revealed a 0.1-percentage-point decrease from the figures of October 2019, when unemployment was 13.4 percent.
Enver Erkan, an economist with the Istanbul based Terra Investment, told Xinhua that he expects the unemployment rate to remain in two digits figures throughout 2020 despite the gradual decline.
"The problem here is the high unemployment figures among young people," he told Xinhua.
The unemployment rate in the young population, which covers the age group of 15 to 24, increased by 24.5 percent in November, an increase of 0.9 points year on year.
Speaking about the expected economic growth rate for the upcoming period, Erkan said five points of a growth rate is what is required for Turkey.
"So that the growth would be able to be reflected in employment and investment," he said. "Otherwise, any growth rate below five points doesn't mean anything."