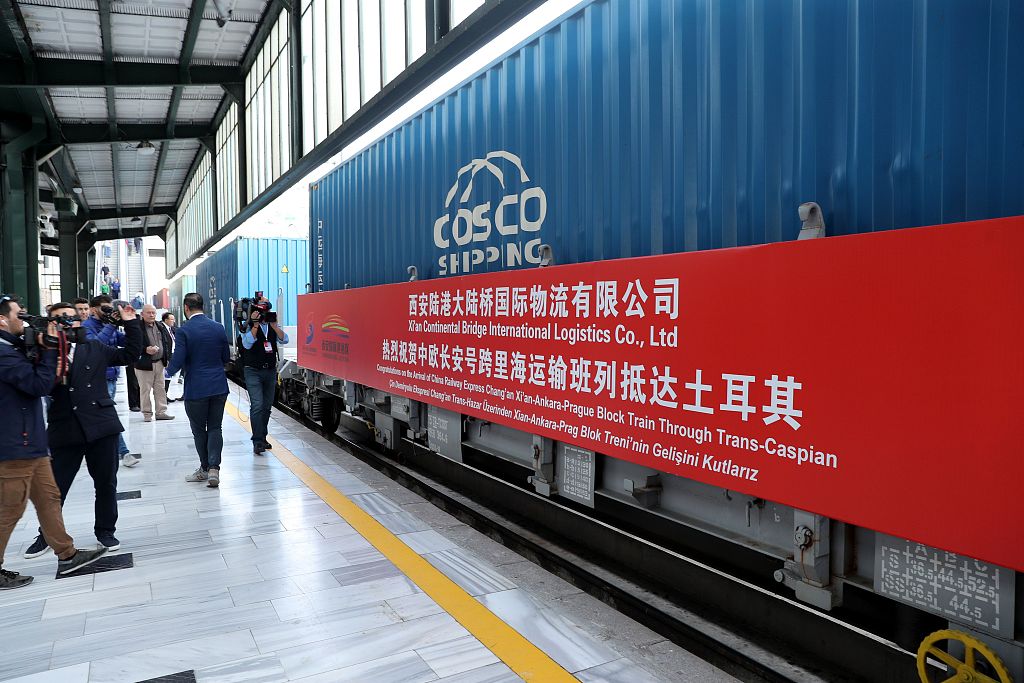 A mammoth Chinese cargo train has arrived in Turkey, en route to Europe, becoming the first freight train to pass uninterrupted under the Bosphorus Strait, using the Marmaray tunnel as part of the China-proposed Belt and Road Initiative (BRI).

Experts hail that a critical phase of the BRI, a huge infrastructure development project involving billions of people, is now being concretely put into motion with the dream of a "Silk Railroad" becoming true with the promise of boosting global trade.

The Silk Road was a trade route active between the 2nd century B.C. and the 18th century, from China to Europe through Anatolia and the Mediterranean.

The freight train, the China Railway Express, is the first such train to pass through the Marmaray subsea tunnel. It departed from Xi'an, China, and entered Turkey on Tuesday thanks to the Trans-Caspian International Transport Route.

The 820-meter long train, comprised of 42 carriages each capable of carrying 76 cubic meters of freight, was welcomed by Turkish and Chinese authorities on Wednesday afternoon at the historical Ankara train station where a ceremony was held.

During the stop-off, Turkish Minister for Transport and Infrastructure Mehmet Cahit Turhan stated that it was the first uninterrupted freight train from China to Europe and it will also go down in history as the first freight train to reach Europe through the Marmaray subsea tunnel, cutting transport time.

"This is a historic moment, it reflects a new era in railway transportation," added Turhan, pointing out that the train, which will pass below the Bosphorus Strait via the Marmaray tunnel, would go on to Prague, capital of the Czech Republic, a journey of 11,500 km, passing through Bulgaria, Hungary and Slovakia.

The railway will reduce the transportation time between China and Turkey from one month to 12 days, while the whole road from Xi'an to Prague will take 18 days.

With the BRI announced in 2013, Chinese goods passing through the rail and sea transportation network will reach other countries in Asia, Europe and Africa in a shorter time.

Furthermore, Turkey is set to gain from the BRI thanks to its geographical position. Ankara promotes the "Middle Corridor" project, which will connect Beijing and London via Turkey in the most cost-effective way.

"We see the trip of this train as a concrete step within the BRI. It is also important because it overlaps with the Middle Corridor project promoted by Turkey," Sait Akman, a senior researcher in Center for Multilateral Trade Studies at the Ankara-based Turkish Economic Policy Research Institute (TEPAV) told Xinhua.

"It is a progress which is in line with Turkey's expectations," he pointed out, indicating that this train could also trigger new Chinese investment in Turkey's railway infrastructure.

Akman noted that Turkey had still a long way to go in order to modernize its railway network ranging from Kars, in the eastern part of the country, to Edirne, the most western part.

The Edirne-Kars project, set to be integrated into the Baku-Tbilisi-Kars railway passing through Turkey, will form one of the pillars of the BRI.

Meanwhile, goods will also be transported to ports in Turkey by ship. Turkey will serve as the entry terminal for the Silk Road to European markets.

"The BRI is all about south-south connectivity, and Chinese leadership to make this happen is good for Turkey," said Guven Sak, the head of TEPAV, in his column in Hurriyet Daily News.

He thought the Marmaray tunnel, completed in 2008, "is not only a rail tunnel to connect Europe to Asia, but also a Turkish contribution to the BRI ... which is about the integration of Asia to global economy."