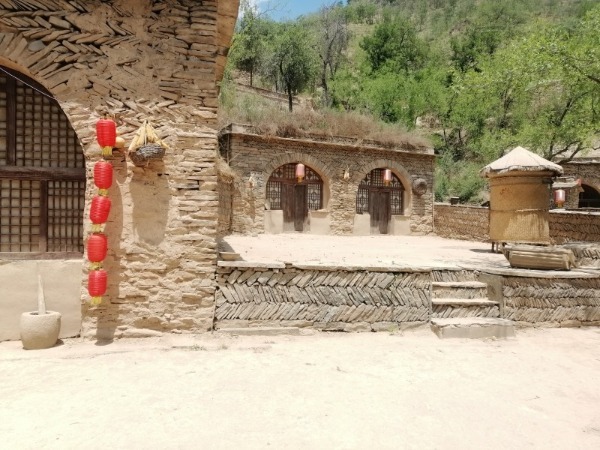 Zhenjiawan was built around 1265. It hosts the biggest and most complete cave dwellings in northern Shaanxi.[File photo]

Fang Xiaoyan hangs up the phone and asks her husband to get ready to look for extras for a TV series to be shot in their village.

"The film cast and crew are coming in a few days," Fang tells husband Bai Xueming. "We need to contact the extras and prepare for reception."

The couple's hometown Zhenjiawan is a village on the Loess Plateau. It falls under the jurisdiction of the city of Yan'an, Northwest China's Shaanxi province.

The village, with a history of more than 700 years, is described by Chinese writer Shi Tiesheng as a place with boundless yellow mountains and endless loess ridges. It features several distinctive house caves or "yaodong," a form of earth shelter dwellings common in the Loess Plateau in northern China.

The village recently came under the spotlight when the local TV station in Yan'an reported about the burgeoning show business there, drawing comparison with East China's Hengdian, one of China's biggest film and television program production centers and a barometer of the cinema industry.

Zhenjiawan was built around 1265. It hosts the biggest and most complete cave dwellings in northern Shaanxi. Generations of people in Zhenjiawan have lived in the cave houses. The village has 706 registered residents.

The lack of fertile land, however, has forced most young people to leave for better-paying jobs in cities. Only 126 people, who make a living by growing corn, sweet potatoes and potatoes, now live in the village.

Beginning in 2017, with the help of authorities in Yan'an, the village leased all its cave houses for restoration. Authorities decided to develop rural tourism by turning the caves into family inns.

In 2018, Zhenjiawan was put on a national list of traditional villages.

Meanwhile, the mountain ridges have become green again thanks to years of efforts to grow forests on farmland.

The village has taken on a whole new look.

After its transformation, the village suddenly became a magnet for TV projects and painters, especially television series and films featuring revolutionary themes, because of Yan'an, a former revolutionary base of the Communist Party of China (CPC). Yan'an hosted the then headquarters of the CPC and was the center of the Communist revolution from 1935 to 1948.

In March 2019, the cast and crew of the TV series, "The Founding of A Republic," began filming in the village. The crew spent more than two months there.

Show business allowed Fang, 24, and Bai to come in frequent contact with cast and crew members.

"I take care of reception and accommodation of the cast and crew, and my husband is in charge of recruiting extras and finding equipment for the shooting," Fang said.

Fang also acts as an extra.

"I was in five films last year," Fang said. "Villagers in the vicinity have all come here to play extras to make some money."

"Even the pigs, cows and sheep in the village took part in the filming," she added.

Last year, Zhenjiawan allowed 13 films and TV series to be shot in the village, according to He Ye, a local official.

Fang and Bai also opened a convenience store in the village. Besides playing an extra, Bai takes on some reconstruction projects in the village, which guarantees more money. With earnings from the village, the couple can make about 100,000 yuan a year. They have bought two second-hand cars.

"I never thought life would go this way," Fang said.

Fang met and fell in love with Bai when they were both migrant workers in Yan'an. After marriage, both went back to Bai's hometown Zhenjiawan. Fang was a little disappointed on seeing the village.

"The entire village was desolate," she recalled. "But since I decided to be with him, I would go wherever he went."

The change in the village these days is "amazing," she said.

"I didn't know we could make money by simply staying in the village," she said. "I am very happy and thankful."

Local authorities plan to build the village into a comprehensive base for "films and TV series shooting, education, research, painting and experiencing traditional culture," said He, the local official. "We hope that more people like Fang and Bai will come back home to help with revival of the village."