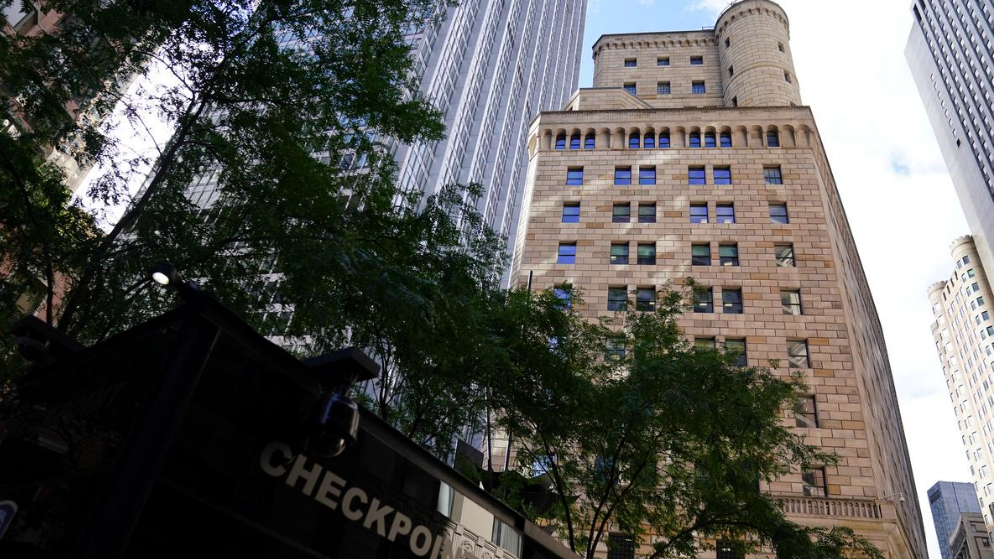 A checkpoint is pictured outside of the Federal Reserve Bank of New York in the Manhattan borough of New York City, New York, U.S., October 4, 2019. (Photo: Reuters)

U.S. consumers' inflation expectations slipped again in October, with household estimates for short-term price gains sliding to the lowest ever in a New York Federal Reserve survey, a troubling sign for a central bank battling to prevent growth-sapping disinflation from taking hold.

The median inflation outlook for the next year dropped by 0.2 percentage point to 2.3 percent, the lowest reading since the New York Fed launched its monthly Survey of Consumer Expectations in 2013. The median three-year outlook for inflation was unchanged at 2.4 percent in October, staying at the low reached in September.
Consumers' expectations for inflation have been mostly declining since the start of the year, according to the report, which was prematurely released on Tuesday, one week ahead of schedule.
The Fed's preferred measure of inflation has not hit its 2 percent target all year and has not done so on a sustained basis since before the 2007-08 financial crisis. The central bank's policymakers are wary of allowing the U.S. economy to fall into the disinflationary and deflationary traps that have stymied growth in Europe and Japan.
One-year inflation expectations dropped the most for consumers above age 40 and for those with incomes above 50,000 U.S. dollars, the survey found. The median expected change for medical price gains over one year fell by 0.7 percentage point to 6.3 percent and the expected shift in food prices fell by 0.4 percentage point to 4.1 percent.
Policymakers have cut interest rates three times this year in an effort to protect the U.S. economy from the threats of a global slowdown, a prolonged trade dispute with China and a slump in manufacturing.

The interest rate reductions were also meant to counter low inflation, a trend that concerns Fed officials because it keeps rates low and leaves the Fed with less ammunition to fight the next downturn.
San Francisco Fed President Mary Daly said on Monday she is worried inflation expectations will fall if the Fed does not hit its 2 percent target in the near future. She added that she thinks inflation will pick up thanks to the rate reductions, growing wages and a recent flurry of activity in the housing market.
"We need an inflation rate that gives us nominal rates that are high enough and give us more police space," Daly said during an event hosted at New York University.
Beyond inflation, the New York Fed report showed workers are slightly more pessimistic about the job market. The perceived chances of losing a job in the next year rose by 1.4 percentage points to 14.8 percent. The mean probability of finding a new position after a job loss dropped to 58.8 percent in October from 60.3 percent in September.
This is the second time in two months that the New York Fed accidentally released a report earlier than planned. On October 14, the bank released the Empire State Manufacturing Survey a day ahead of scheduled due to technical difficulties.