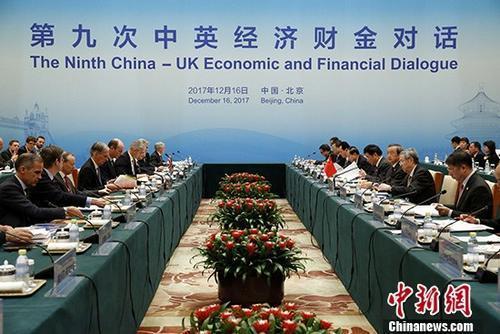 The ninth China-UK Economic and Financial Dialogue is held in Beijing on December 16, 2017. (Photo: Chinanews.com)

The Chancellor agreed more than £1bn worth of trade and investment deals with China. These included commitments to deepen the UK-China financial services relationship, with UK banks given licenses to underwrite panda bonds in China for the first time.

They also discussed ways in which the UK and London can partner with China on the Belt and Road Initiative, including planning a study into encouraging private capital investment into the Initiative. UK Export Finance confirmed it is capable to support new businesses in countries in Asia involved with BRI, up to £25bn.

The UK and China also held a Trade Working Group to discuss the future trade and investment relationship ahead of the UK leaving the EU. This included discussion about China reducing tariffs on a range of food, retail and pharmaceutical goods.

Both sides reaffirmed support for the global trade system and to enhance dialogue on the digital economy where there is scope to help companies from both countries engage more.

The environment was also on the agenda as the UK and China launched an Action Plan for the UK-China Clean Energy Partnership, both sides committing to further policy and commercial cooperation on clean technology, reducing coal, market reform, low carbon transport and smart grids. They also agreed to establish an ongoing dialogue on achieving zero carbon transport in both countries.

The UK and China reiterated their commitment to the "Golden Era" in UK-China relations.