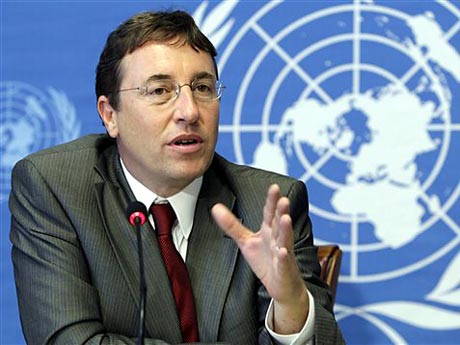 Beijing (People's Daily) -- In an exclusive People’s Daily interview, Administrator for the United Nations Development Program (UNDP), Achim Steiner, shared his thoughts on China’s contributions to environmental protection, the Belt and Road Initiative, global influence, and how younger Chinese are choosing to join the UN.

From Steiner’s perspective, ever since the 19th National Congress of the CPC, the results have happened through Xi Jinping’s guidance as China has engaged much more actively with the world, and even with the concepts of blue development and ecological civilizations. “China’s progress can be seen by the blue skies of the last three days, and the important measures set to combat pollution have already shown results. It’s great news for China, for Chinese citizens, for the nation’s big cities, and also good news for the world,” said Steiner.

Belt and Road Initiative benefits those who not directly connected

The Belt and Road Initiative is an ambitious vision and a framework for innovative development promoting global and regional cooperation to create shared benefits and optimize economic growth.

Steiner explained, “There is no greater signal of a country wishing to engage with the world than the kind of commitment China has made with its Belt and Road initiative. It is the single largest financial commitment made in the last 50 to 70 years by any country to invest in, and develop, other countries, and also for relationships.”

He believes the Belt and Road initiative provides a network for countries to collaborate with one another. Nations who are not linked to the Belt and Road will be influenced by the relationships and financial resources available to them for investment.

UNDP and the UN recognizes the Belt and Road as an important global initiative that has the potential to shape the landscape of international cooperation and economic growth.

The role China plays in helping the UN develop agreements, like the Paris Agreement on Climate Change, “is critical for allowing the international community to come together,” Steiner pointed out.

On the other hand, China has taken the unprecedented decision to invest $70 million with UNDP to allow it to provide disaster response and recovery support in Nepal, Pakistan and the Caribbean islands affected by hurricanes, through which Steiner feels that China has engaged in over the past year.

“Welcoming more young Chinese to join the UN,” Steiner added. He finds it encouraging how they appreciate UN commitment and spirit.

“Sometimes it is difficult for the world to understand why the UN matters because we have wars, we have disasters, we have conflicts and extreme poverty,” he said.

The idea is that the United Nations provides humanitarian assistance, ensures peace and security and assists development.

“But young people, particularly young Chinese men and women, are joining the United Nations. I see this as they believe in the UN mission. And they accept that although we are called the United Nations, the organization was established because nations are not united.”

“You have to accept that the journey towards a more peaceful, more sustainable future, more harmonious future, is never going to be a straight line.”

“You have many challenges to face. But I do encourage every young Chinese citizen to at least think about the United Nations, sometimes it may not mean joining the organization, but the spirit, the ideas of the charter of the United Nations, which can apply to your work in your life.”

“You can be part of that idea of the United Nations even you are not necessarily employed by it. And I think that’s a really important idea,” Steiner said.