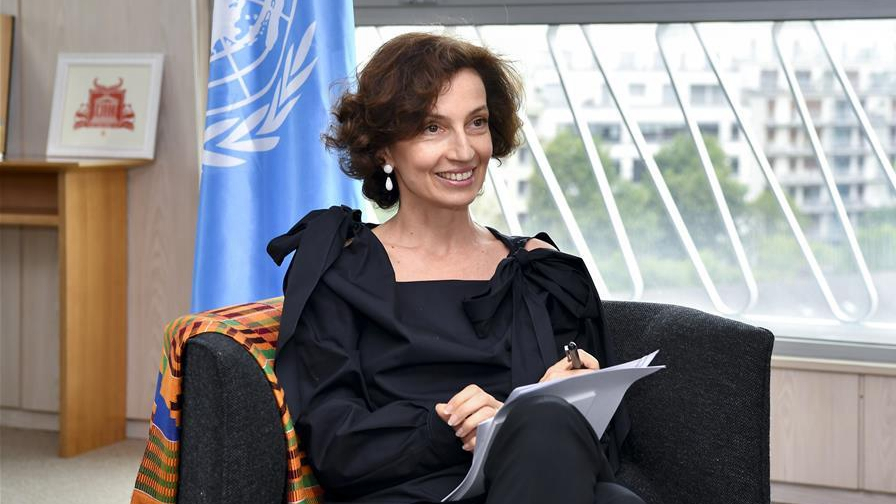 China is committed to multilateralism and is a strategic partner for UNESCO, but the organization's Director-General Audrey Azoulay said "we can reinforce Chinese-UNESCO cooperation and move to a higher level".

Between July 16 and 19, Azoulay will make her first visit to China as Director-General of the United Nations Educational, Scientific and Cultural Organization (UNESCO).

"It's an important visit. The relationship between UNESCO and China is very strong and strategic," she said during a recent interview with Chinese media.

"Today's world faces many global challenges, such as the extremism, the climate issue, which no country can solve alone."

"This is why I insist on going to China at the very beginning of my term," Azoulay said.

Azoulay, a former French culture minister, took office last November as chief of the UN body for a four-year term.

The 46-year-old was communication and culture advisor of former French president Francois Hollande between 2014 and 2016 before managing the Ministry of Culture in February of 2016.

Audrey Azoulay, who had visited China regularly for more than 10 years, said she was impressed by China's evolution.

"When we look at the literacy rate, there is major progress since the 1980s, and the gap in literacy which existed between men and women was reduced in a very spectacular way over the last 20 years. That is at the basis of the current economic success of China and its advanced economy in technologies."

China is, she said, one of the most important countries in terms of recognition of world heritage through UNESCO procedures.

Azoulay said UNESCO and China have fruitful cooperation in different fields, such as the advancement of girls' and women's education, professional training in Africa. "In light of successful examples we already have, we could move this partnership to a higher level."

Evoking the Belt and Road Initiative, she said that "it's an initiative in which there are many convergences possible with the missions of UNESCO."

Besides the connection of infrastructures and economic cooperation, this Initiative is also about connection and exchange in culture and education. UNESCO takes this role, for example, with some projects to preserve and restore the heritage sites of the countries along the historical trading routes, she said.

Azoulay underlined the pioneering China is currently doing in artificial intelligence (AI) and will visit the AI Institute of Tsinghua University during her visit.

"It's also an important domain for UNESCO, because that has a direct impact on education systems, and it's important for UNESCO to be a sharing platform so that this technology would be at the service of greater good."

UNESCO continues to be a part of the evolution of education, science and culture in China, and China accompanies UNESCO in carrying the messages of education, culture, scientific cooperation, and new technology to the rest of the world, she concluded.