Several dozen movie lovers gathered on the campus of the University of Nairobi Monday evening for the launch of Kenya's first-ever Chinese Film Week. The five-day event runs through Friday and is organized in collaboration with the Chinese embassy and the university's Confucius Institute, which is the oldest in Africa. 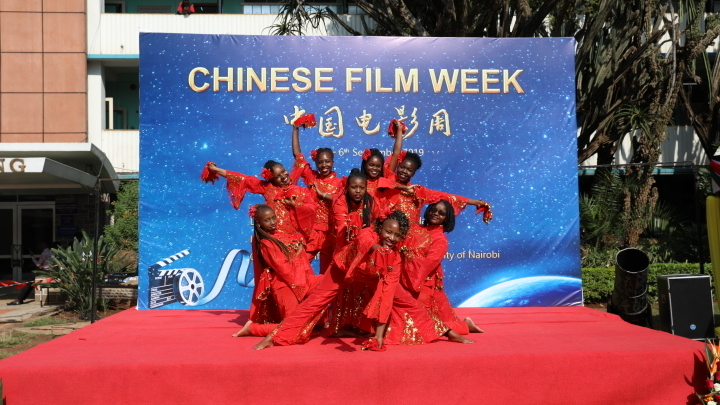 Ten carefully selected Chinese films will be screened free of charge to Kenyan audiences. Organizers emphasized that diverse genres were picked in order to showcase the broad range and scope of China's cinematic offerings.

The titles range from kung-fu classics like Bruce Lee's The Way of the Dragon (1972) to the crime thrillers of Hong Kong's Cold War franchise, along with more lighthearted fare like the 2011 romantic comedy Love is Not Blind. The patriotic historical epic The Founding of a Republic also makes an appearance.

Guo Ce, the Minister Counselor of Economics and Commerce at the Chinese Embassy in Kenya, told attendees the goal was to "enhance the cultural and people-to-people exchanges between the two countries."

From the classroom to the box office

"Many Kenyans are now learning Chinese," said Prof. Julius Ogeng'o, the university's Deputy Vice-Chancellor for Academic Affairs, "I believe this will go a long way towards the understanding of Chinese films."

Ruth Njeri, a professor of Chinese language who is pursuing a Ph.D. at Tianjin Normal University, agrees that entertainment can often serve as an entry point to a lifetime of fascination in what a country has to offer.

"Chinese films have a strong influence on young people learning Chinese,” the bilingual educator and Kenyan mother-of-two tells us. “For many people, films are the first point of contact with the culture."

Getting hooked: cultural products as a 'gateway drug'

Milta Wanjai, who took part in a dance performance at the event, is a case in point. She says she started learning Chinese because "It's an interesting language and an interesting culture." The twenty-year-old hopes to pursue a scholarship for a Master’s degree in either Beijing or Shanghai.

Faith Wangui is also no stranger to how cultural products like films can spark a deeper interest in a country and its language. She began taking Chinese dancing lessons at the University of Nairobi's Confucius Institute back in 2015. She has since taken two trips across China and become an enthusiastic student of Mandarin.

"I liked Hunan province the best," she says, "because of the culture and the way the people danced."

On top of providing a basis for cultural contact between China and Kenya, many are eyeing the cross-border movie business for its profit potential and development opportunities.

Joe Mucheru, Kenyan Cabinet Secretary for Information, Communications and Technology, hailed the recent cooperation between Nairobi and Beijing in the film sector, saying the industry had the potential to generate thousands of jobs for Kenya's young people while producing tax dollars for the Kenyan state.

He urged "key Chinese filmmakers to consider Kenya as a film production location, especially for films that contain scenes of Africa." The secretary stressed that the country's geographic and cultural diversity made it well-suited for a wide range of movies.

But Ruth Njeri thought the cooperation could go even further, expressing hope that the cultural conversation could become more of a two-way street.

"As much as we are watching Chinese movies here in Kenya," she said, “one day I believe we will take our Kenyan movies to China."