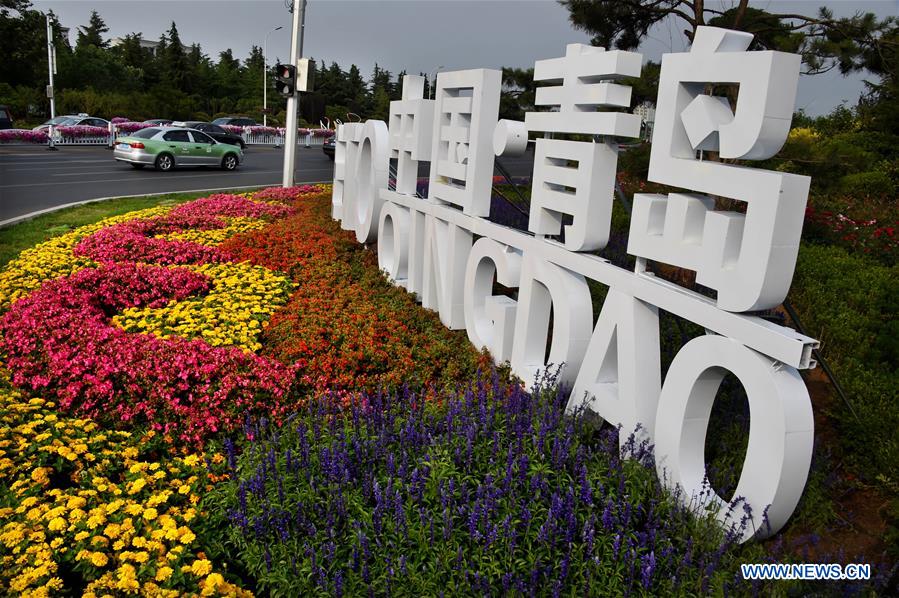 Photo taken on June 4, 2018 shows an installation made of flowers in Qingdao, East China's Shandong Province. The 18th Shanghai Cooperation Organization Summit is scheduled for June 9 to 10 in Qingdao. (Photo: Xinhua)

The 18th annual Shanghai Cooperation Organization (SCO) summit will be held on June 9-10, 2018 in Qingdao. This is the first SCO summit since its expansion in June 2017 at the Astana summit in Kazakhstan, when India and Pakistan joined as full members. As the host of this year's summit, Chinese President Xi Jinping will chair a series of meetings and discussions which are expected to highlight inclusive and sustainable development as well as international security.

The SCO's predecessor, Shanghai Five, was formed in Shanghai in April 1996, with China, Kazakhstan, Kyrgyzstan, Russia and Tajikistan as the original members. With the participation of Uzbekistan, the SCO was created in June 2001 in Shanghai as a Eurasian political, economic, and security organization. Since its founding, the SCO has promoted multilateral cooperation in security, military, economic, and cultural affairs. Over the years the group has been expanded to include new members, observers, and dialogue partners, but the "Shanghai Spirit" of advancing international cooperation remains the core principle of the group.

This year's SCO summit is significant in several aspects. First of all, it demonstrates SCO members' commitment to multilateral cooperation in tackling common challenges. This is particularly important and timely when the United States is retreating from multilateralism and focusing on "America first" under President Donald Trump. Many global challenges such as climate change, terrorism, and illicit immigration cannot be dealt with without international cooperation. As America's global leadership weakens, the SCO is becoming a very positive force in today's international affairs.

As Chinese Foreign Minister Wang Yi remarked, the Qingdao Summit will become "a new milestone in the development of the SCO". Qingdao is one of the first Chinese cities to open up and an important port for the Belt and Road Initiative. The experience of Qingdao and China as a whole is testament to the benefits of opening-up and international cooperation. All SCO member states are along the Belt and Road, so the SCO is likely to become an instrument to promote inclusive development and people-to-people exchanges as part of the BRI.

Secondly, the SCO will help promote peace and stability in international affairs, especially in the Middle East and East Asia. Among leaders attending the Qingdao summit will be Iran's president Hassan Rouhani, who will meet with Chinese and Russian leaders as they try to salvage the nuclear deal thrown into upheaval by President Trump. China, Russia and European powers, all of which signed the 2015 Iran nuclear accord, are scrambling to save the pact following the US president's decision to quit the agreement and reinstate sanctions. The US withdrawal from the Iran nuclear deal has introduced new uncertainties to the unstable Middle East region. The SCO will attempt to ensure that no new nuclear crisis will erupt in the Middle East.

Similarly, the North Korea nuclear program is a major security challenge for East Asia and the world. North Korea, though not a member of the SCO, will likely be featured in security discussions during the SCO. As Trump frequently and unpredictably changes his mind regarding North Korea's nuclear issue, a unified and consistent position from the SCO will send a powerful message to the US and the world at large that security challenges must be addressed seriously and with international cooperation. In addition to the nuclear issue, the SCO is committed to promoting peace and security in other areas including combating the "three evil forces" (terrorism, extremism, and separatism), drug trafficking, and cybercrime.

Thirdly, the SCO is a venue for promoting political dialogue and narrowing bilateral differences between member states. Leaders of India and Pakistan, new members of the SCO, will attend the summit. In addition to multilateral settings, the SCO provides a new venue for the two rivals to sit down and address their differences.

The SCO will also provide an opportunity for India and China to reduce their perceptual and policy differences. India has reservations about China's BRI. Prime Minister Narendra Modi traveled to Wuhan in April and had a productive "informal" meeting with President Xi. Their meeting in Qingdao will deepen their personal ties and help the two leaders address issues of strategic trust and mutual development.

Finally, if the planned meeting between Trump and North Korean leader Kim Jong-un does take place on June 12 in Singapore, on the heels of the SCO summit, the international media coverage of the SCO summit in Qingdao and its aftermath is likely to be overshadowed by the Singapore meeting, but the long-term significance of the Qingdao summit should not be underestimated. The Qingdao summit will be remembered as a forum to promote innovative, coordinated, green, and open development for everyone. The Qingdao Declaration, expected to be issued during the summit, will be an important document that contributes to global governance and international cooperation in tackling common challenges when globalization is encountering setbacks from Europe to the United States.

(Zhiqun Zhu, PhD, is a professor of political science and international relations at Bucknell University, US. He is currently visiting the Center for the History of Global Development at Shanghai University, China.)