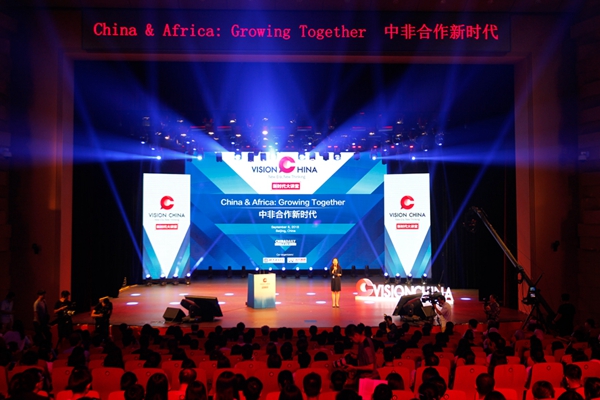 The fourth event of Vision China is held in Beijing, Sept 6, 2018. [Photo by Chen Zebing/chinadaily.com.cn]

Four speakers, from China, Africa and Europe, shared their opinions on the recently concluded 2018 Beijing Summit of the Forum on China-Africa Cooperation as well as on how to deepen the China-Africa comprehensive strategic partnership and build a closer China-Africa community with a shared future.

The FOCAC summit was held in Beijing on Monday and Tuesday. In proposing eight major initiatives for China-Africa cooperation, President Xi Jinping appealed for the building of a closer China-Africa community with a shared future in the new era.

Vision China has sparked in-depth discussion on how to better implement the summit outcomes and consensus reached by Chinese and African leaders, and boost China-Africa exchanges, all-around cooperation and the construction of a community with a shared future.

Jin Liqun, president of the Asian Infrastructure Investment Bank; David Gosset, founder of the Europe-China Forum; Hodan Osman Abdi, adviser to the president of Somalia and executive director of Zhejiang Normal University's Center for East African Studies; and Zahra Baitie, China director of Development Reimagined and founder of Beijing Africa Week, all gave insightful speeches based on their experiences and understanding of Sino-African relations.

Guo Weimin, vice-minister of the State Council Information Office; Zhou Shuchun, publisher and editor-in-chief of China Daily; Du Feijin, head of publicity department for the Beijing Committee of the Communist Party of China; Wei Gang, director of strategic planning at Beijing Automotive Industry Holding Co; and Ni Haidong, Party chief of Beijing Language and Culture University, also attended the event together in an audience of about 1000 people.

Addressing the event, Guo said the success of the Beijing summit opened a new chapter in the construction of the China-Africa community with a shared future, adding that President Xi's important speech had received vast applause from African countries and the international community.

Guided by the summit outcomes, China and Africa will enjoy deeper mutual trust, wider cooperation, and tighter bonds of friendship, he said.

This year marks the 40th anniversary of China's reform and opening-up. Guo said under the leadership of President Xi, China will firmly carry on people-centered development, implement new development concepts, and comprehensively deepen reforms so that the people of Africa and around the world can benefit from China's innovation and development.

As China continues to open up to the outside world and further promote the Belt and Road Initiative, it will firmly safeguard the open world economy and multilateral trading system, and will oppose trade protectionism and unilateralism, creating more opportunities for nations in Africa and worldwide, he added.

Du, the publicity chief of Beijing, said in his address that President Xi's speech at the Beijing summit showed clearly the direction for building a closer China-Africa community with a shared future.

Beijing is boosting construction of a world-class harmonious and livable capital, actively carrying out foreign exchanges and cooperation and continuously enhancing the city's international influence and image, he said.

He said Beijing has fully integrated the city's advantageous resources, actively implemented the Belt and Road Initiative, and made a unique contribution to the development of China-Africa relations by deeply and actively participating in China-Africa cooperation.

In particular, economic and trade cooperation has achieved new results, culture exchanges have boomed, and international friendship city exchanges have reached a new level, he said.