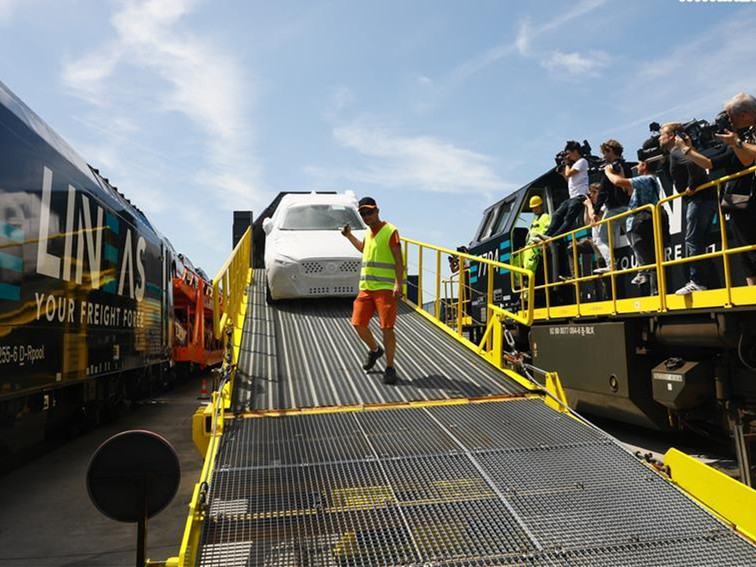 The models, made at Volvo's Chengdu plant, will be sold in 25 European countries, including the United Kingdom, France, Italy and Germany.

The train will return to the Chinese mainland carrying the Volvo's XC90 SUVs and V-series wagons made in Europe.

Volvo became the first premium carmaker to export China-made models to developed countries in 2015 when a fleet of S60 sedans made at the Chengdu plant were shipped to the United States.

Over the years, its China plants have played an increasingly important role as one of the strategic centers of Volvo's global manufacturing network.

Statistics show Volvo models made in China have been exported to over 70 countries and regions, with 40 percent of vehicles at its Chinese plants sold overseas.

As a significant part of Volvo's global manufacturing footprint, China plants have quickly responded to demand from global markets. The railway line that connects China with Europe is benefitting the carmaker.

In the first half of 2019, the proportion of exports by Volvo via railway reached 26.4 per cent of total exports.

Railway in 2017 became the sole method of transportation for Volvo's models delivered to Europe.

"We have also demonstrated our capability in responding to the needs of global markets and consumers and flexibility in coping with changes in global economic environment and industrial structure."

Volvo reported sales of 340,826 cars in the first half of 2019, up 7.3 percent compared to the same period last year. The automaker said China, the US and Europe all reported a steady growth for the six-month period.

The company saw its highest-ever first half-year sales in China of 67,741 cars, up 10.2 percent year-on-year, despite the overall sluggish passenger car market in the country. Strong demand for the locally produced XC60 and the S90 models led the volume growth in the six-month period. In June, Volvo also set a single-month sales record with 13,238 cars sold.