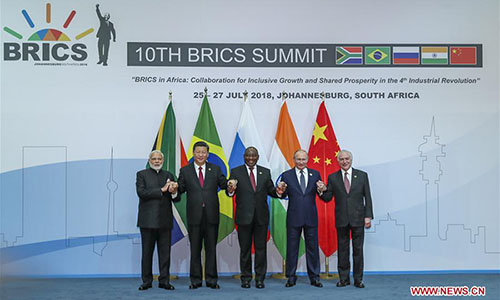 US Secretary of State Mike Pompeo announced $113 million in new US investments in technology, energy and infrastructure for the Indo-Pacific region Monday. "These funds represent just a down payment on a new era in US economic commitment to peace and prosperity in the Indo-Pacific region," Pompeo said. He added that in referring to an "open" Indo-Pacific region, the US means all nations must enjoy "open access to sea and airways" and the US has never and will never seek domination in the region. Delivered at the Indo-Pacific Business Forum hosted by the US Chamber of Commerce, Pompeo's remarks were generally interpreted by Western media as targeting China. The secretary of state also said in an interview the same day that any potential IMF bailout for Pakistan should not be used to pay off Chinese loans, leading to more speculation that Washington is boycotting China's Belt and Road initiative. Washington may hope to disrupt the Belt and Road initiative, but it is highly unlikely the US' $113 million investment initiative will collide with the Belt and Road initiative. The Indo-Pacific region is too big and many Western elites have misunderstood the nature of the Belt and Road initiative, believing it is a geopolitical strategy that should be challenged. Given the backward infrastructure of the Indo-Pacific region, development plans, no matter how many, are far from enough to meet its needs. Different plans should not be exclusive to each other. The Belt and Road initiative is an open development plan. It's not about competition, but a platform for cooperation.  Many countries along the route of the Belt and Road are underdeveloped and have fallen behind in globalization. China's infrastructure construction capacity and manufacturing capacity are in line with their current needs. With the capacity and Chinese investment flowing into the region, an exploration of large international construction cooperation has been formed.  What's important is that China has not interfered in any country's politics nor sought to expand its sphere of influence. These countries participate in the initiative to expand their foreign cooperation. What are the US and other Western countries worried about?The main reason may be that imperialism is deeply rooted in Western countries' political thinking and they understand the era differently from emerging countries. The West is still dominated by the US politically and militarily, and such a model has influenced Western countries' perception of non-Western countries.Major powers are independent from each other outside the West. The Shanghai Cooperation Organization and BRICS are obviously more equal than NATO and the G7. The consideration for emerging countries is mutual development and cooperation, not conquest. The Belt and Road's original intention was not an expedition, but for co-prosperity. China welcomes the US to invest in the Indo-Pacific, which may be a good thing for the Belt and Road if the US promotes the development of the region. Chinese people are not surprised by the problems surfacing in the Belt and Road. The initiative is cooperative as well as explorative for the future. In the context of globalization, the initiative is bound to be carried forward regardless of some countries' selfish tricks and sarcastic remarks.