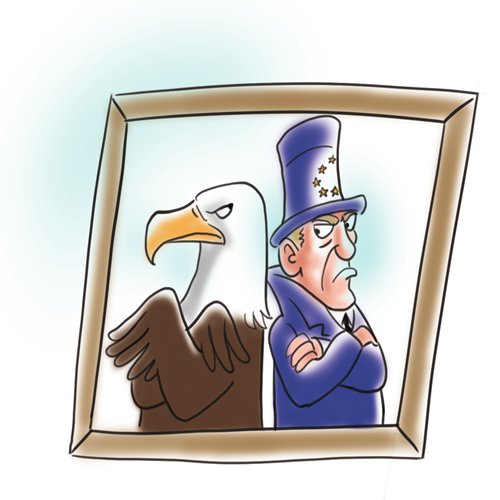 Since Donald Trump came to power, relations between the US and Europe have been in jeopardy. The US has repeatedly bumped heads with the European Union and its member states over NATO defense spending, the Transatlantic Trade and Investment Partnership negotiations, and the Paris climate deal.

US-Europe relations are now persistently clouded. Although major European countries maintain strategic communication with the US, ties seem to have become tepid. Trade disputes and collapse of the Iran nuclear agreement have brought relations to the lowest level since the Cold War. The rift over trade, security and culture is widening.

Trade, security cooperation and a shared value system are three major bonds that keep US and Europe close. But as all the three have gone awry together, transatlantic relations are falling apart.

Under the excuse of national security, the White House levied high tariffs on its allies, including the EU. In March, Trump imposed tariffs − 25 percent on steel and 10 percent on aluminum − on countries including 28 EU member states.

In addition, Trump criticized the terms of trade with Europe and demanded that the EU open up its market to a larger extent. His administration has imposed a 2.5 percent tariff on cars assembled in Europe and a 25 percent levy on EU-made trucks and vans.

To fight this, the EU is trying to defend the interests of its member states. Going by the developments, Trump's "America First" and trade protection policies will continue to ferment, and new trade barriers may emerge.

The US has withdrawn from the Iran nuclear deal. This piqued European nations.  France, Germany, and UK have resolved to stay within the deal.

The deal has been a major success of EU foreign policy. It not only safeguards the interests of major European companies, but also enhances the EU's global role and the bloc does not want to see its collapse. On Friday, it launched a statute to ban European companies from complying with US sanctions against Iran.

However, because of the US dollar's status in the global financial system and its military power, Washington holds a dominant position. Under the pressure of US economic sanctions on Iran, European companies have begun to retreat. For instance, French energy giant Total has suspended natural gas projects in Iran.

The allies of a liberal international order and transatlantic partners have now been drifting away from each other. Remarks by Donald Tusk, president of the European Council, showed EU's helplessness. "Looking at the latest decisions of President Trump, someone could even think with friends like that, who needs enemies," Tusk said in Sofia on Wednesday. "But frankly speaking, Europe should be grateful for President Trump because thanks to him we have got rid of all illusions. He has made us realize that if you need a helping hand, you will find one at the end of your arm."

These words imply that worsening US-European relations may turn into an opportunity for the bloc. We can see that European countries did not split into two camps as during the Iraq war of 2003. At least, the three major EU powers - Britain, France, and Germany - are confronting the challenges of the US' unilateral actions.

The EU has taken this opportunity to push forward defense integration, boost the euro's international status, cement solidarity among member states, and in particular, strengthen the EU's centripetal force in Central and East European countries.

Withdrawing from the Paris climate accord and the Iran nuclear deal, challenging the global trading system, moving the US embassy in Israel to Jerusalem are all manifestation of the Trump administration's pursuit of radical unilateralism. When rupture emerges in Europe-US relations, China cannot sit idle. The complications in US-European relations will have an impact on a wide range of political, economic and geopolitical issues.

We must not only cope with the pressure of the US trade war, but also deepen cooperation with Europe, especially Germany, and promote the implementation of the Belt and Road initiative in the continent.