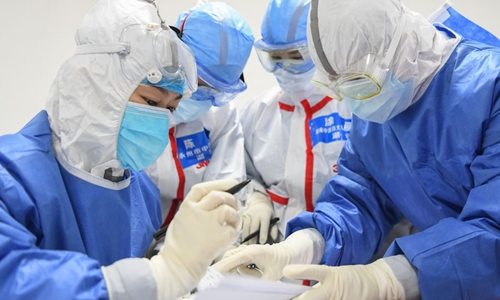 As local governments are racing against the clock to quarantine and guide people to curb the spread of the novel coronavirus, Western medicine therapy and traditional Chinese medicine (TCM) are scrambling to find the best treatment for patients in the outbreak that has claimed at least 1,770 lives so far.
To reduce the death toll and increase the curative rate, hospitals across China and medical teams in Hubei Province, the epicenter of the outbreak, have adopted different therapies to treat patients, which recalled a debate over the effectiveness of TCM.
TCM universities and hospitals across the country have sent 2,220 medical workers to Hubei to help combat the epidemic, Wang Hesheng, deputy head of the National Health Commission, said at a press conference on Saturday.
TCM has been applied in the treatment of more than half of the confirmed patients of COVID-19 in Hubei, Wang said, noting that the combination of TCM and Western medicine is an important feature of the fight against the novel coronavirus epidemic.
However, skeptics believe that TCM treatment against the virus has no scientific evidence and uses only a combination of medical herbs. A medicine has to pass at least three phases of clinical trials before it can be applied, Tao Lina, a former fellow with the Shanghai Center for Disease Control and Prevention, told the Global Times on Monday.
It's a strange logic to say TCM can prevent and cure the coronavirus since TCM does not have the concept of microorganisms, Tao said. "It's like a mechanic who doesn't know the mechanics of a television but claims he can fix a broken TV. Maybe it's done by coincidence."
However, two patients from East China's Jiangxi Province who only received TCM treatment have been discharged from hospital on Sunday. For patients in critical conditions, TCM can improve their symptoms, shorten treatment duration, reduce the amount of hormones and reduce complications, reports said.
"It is undeniable that TCM can effectively relieve symptoms like cough and fever. In addition, it is not impossible that TCM could be proven effective to kill the virus in the future, like Tu Youyou discovering artemisinin," Cui Yongqiang, a chief physician at a hospital affiliated with the Chinese Academy of Chinese Medical Sciences in Beijing, told the Global Times on Monday.
With the right methods, and the help of "a 1,700-year-old book" on TCM, Chinese pharmacologist Tu Youyou received the 2015 Nobel Prize in Physiology or Medicine for discovering an active component, artemisinin, which is effective against malaria, saving the lives of millions and halving the mortality rate of malaria over the past 15 years.
Cui believes that when there are no special drugs that can directly kill the novel coronavirus, TCM and Western medicine are doing the same thing to alleviate the symptoms and strengthen the body's immunity.
But according to Peng Zhiyong, director of the intensive care unit of the Zhongnan Hospital of Wuhan University in Wuhan, doctors use more Western medicine in clinical treatment than TCM. "TCM does well in relieving symptoms but is not so effective on critical patients," Peng said.
TCM can achieve apparent effects on the patient at the early stage of the disease. A type of herbal medicine soup has proved effective for 90 percent of the COVID-19 patients, as revealed by clinical observation, the National Administration of Traditional Chinese Medicine announced.
Hu Bijie, director of the infection department in a hospital in Shanghai, told the Global Times that "cases have shown the combination of TCM and Western medicine has better results in treating the coronavirus infection than using either alone."
Hu holds very high expectations for the development of a "magic" Western drug, similar to Oseltamivir, a very effective antiviral medicine used to prevent and treat flu. "But who knows when this magic drug can be developed?" Hu said.
The combination of TCM and Western medicine has been applied in treating patients at designated hospitals in Hubei Province and has proved effective in treating mild cases of the coronavirus and shortening the treatment period for critical patients. Over 75 percent of the confirmed patients in Hubei used TCM, reports said.
Clinical doctors have revealed that the coronavirus could damage multiple organs. Cui noted that TCM would do better under these circumstances as it aims at regulating people's overall physical state rather than targeting one single symptom.
"The controversy over TCM has lasted for years, but we can see that its effectiveness is gradually being accepted by the international community. Now, many foreigners are interested in TCM and come to China to learn TCM," Cui said.
The usage of TCM should not be interpreted as a denial of other measures for COVID-19, he noted.
TCM has a wide acceptance among older generations in China. People rushed to purchase Shuanghuanglian syrup, containing three herbal ingredients, when experts declared it was effective against the coronavirus, but later some medical professionals revealed that its anti-viral function had yet to be further proved.