BRI NEWS What will future international order look like? 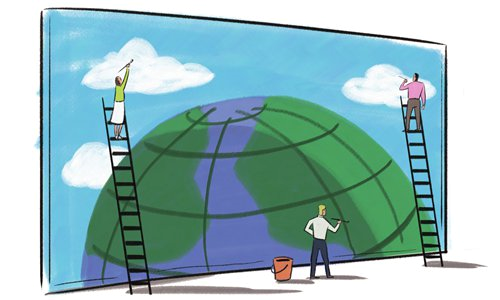 The US tried to build a unipolar global order after the Cold War by expanding and consolidating ties and alliances it forged after World War II. However, from the first decade of the 21st century, the US-led international order began to change with the pace of transformation accelerating in the second decade.

First, the change in power is one reason. All orders in history were built on the basis of power and norms. The profound change in the balance of power in this century is driving the transformation of the existing order.

Second, the shortcomings of the existing order, including too much American dominance, insufficient public goods and the lack of inclusiveness, have hastened the need for change.

Third, the US' ability and willingness to maintain the current order is declining. After Donald Trump came to office, the US increasingly showed a tendency to undermine the existing order. Joseph Nye of Harvard University says he is worried the liberal international order is threatened more by the rise of Trump than by the rise of China.

China is one of the main drivers of the transformation with the growing power and willingness to bring about change. But China will not replace the US as the next hegemon or establish a new hegemonic order.

China's national strength is far behind that of the US. In economic strength, China is likely to bypass the US, but it is difficult to beat Washington in terms of military and technological might. In addition, the soft power the US has gained via international organizations such as the United Nations, the International Monetary Fund and the World Bank, is still hard for China to catch up with.

Beijing needs to promote reform of the current order, including strengthening existing multilateral mechanisms as well as providing some other options, such as the Asian Infrastructure Investment Bank and the Belt and Road initiative. It will neither undermine multilateral institutions, nor build an alliance system. But all these efforts to promote change and expand its influence will inevitably be subject to US structural constraints.

The paradigm of Sino-US relations in the 21st century is likely to be characterized by power- and leadership-sharing. This means that the US must accept China's rise and expanded international role, while China must learn to get along with the US in both competition and cooperation. This is consistent with the goal of Beijing to establish a new type of major power relationship with Washington.

So, what kind of order will the future world acquire? The international system will emerge as a regional or sub-regional community that shares interests and ideas, like the EU and the ASEAN, and inter-state relations will be in the nature of partnerships rather than following the superior-subordinate model.

If before WWII it was a so-called free empire order, the postwar order could be described as "free-hegemonic." "Free" because of open trade and multilateralism; "hegemonic" because it is dominated by the US, the keeper of this system. The world's largest economy has created a hierarchy based on its unrivaled economic and military advantages, and the system reflects its own vision of order, values and interests.

In the 21st century, we will see the emergence of a free partnership order, in which the world embraces more openness, multilateralism and freedom, and countries build partnerships based on equality, respect and mutual benefits.

On the whole, more freedom and less hegemony will be the greatest feature of the 21st century international order. Due to the prominent role of globalization and economic factors in the current changes in vogue, the new order will be dominated by economic factors rather than security considerations.

With the rise of emerging countries, developing nations will have a greater say in international affairs. Regional organizations will play a greater role in regional governance. The new order will accommodate more political, economic and cultural diversity than the current one that has been dominated by Western values and culture.

In the era of major changes, emerging economies are prone to impulses and hegemonic countries vulnerable to anxiety, which in turn impacts their strategy and policy making. We must have an accurate judgment of where the world is headed. An understanding that the world pattern of the 21st century will be characterized by multilateralism and partnership will help overcome the impulse and anxiety.