BRI NEWS Where are China-India ties headed in 2018?

Where are China-India ties headed in 2018? 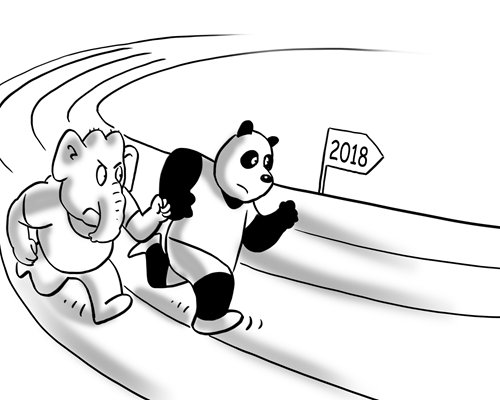 The year 2017 is doomed to be a special year in the history of China-India relations. The Doklam standoff pushed the two Asian powers to the brink of war, becoming the biggest crisis between them in the past 55 years. Bilateral ties have been blighted by three major strategic contradictions: the border dispute, the Tibet issue, and India's reckoning that China-Pakistan friendship poses a threat. However, it is unlikely that the three interwoven conundrums will be solved in the near future; control and management are the only way out. In addition to these decades-long disputes, new ones keep propping up to dent Sino-Indian ties. New Delhi's application for the membership of the Nuclear Suppliers Group in 2016 was opposed by Beijing. India blamed China for blocking its bid to place Pakistan-based Jaish-e-Mohammed chief Masood Azhar on the 1267 sanctions list. On these issues, the two nations should further exchange views and remain patient, which helps reach consensus more easily than public pressure and censure. New Delhi also keeps banging on about the Tibet issue. Last December, then Indian president Pranab Mukherjee met with the Dalai Lama. In April, the Dalai Lama arrived in the so-called "Arunachal Pradesh" for a week-long visit. During the Doklam standoff, India let Lobsang Sangay, head of the Tibetan "government-in-exile," visit Lhakar on July 5 and hoisted a "Tibetan flag," a symbol of "Tibet independence," on the shores of Pangong Lake for the first time. With the moves, India intends to make China compromise on the border issue, but it has failed to do so, provoking some Chinese to counter India. If India continues to follow this tactic in 2018, its relations with China may worsen further.The Indian government has been very negative about the Belt and Road initiative. It refused to send delegates to the Belt and Road Forum for International Cooperation in Beijing in May and attacked the initiative for generating a huge debt burden for some South Asian nations. The Bangladesh-China-India-Myanmar Economic Corridor project remains in limbo, so China had to roll out the China-Myanmar corridor. While India did not respond to the China-Nepal-India Economic Corridor, China and Nepal will take the first step in furthering cooperation. Beijing knows it will not be able to change India's mentality and judgment in 2018, but will not close the door of cooperation. When India realizes the Belt and Road initiative benefits its national interests, it will take part. The Doklam standoff might be a historical turning point in Sino-Indian history, as it drew the attention of the Chinese government and people to India. Where is the bilateral military relationship headed in 2018 and beyond? From an optimistic perspective, the standoff will prompt the two countries to deepen strategic communication and control disputes to usher them in a new era of development. But looking through blue glasses, the confrontation has fully exposed all contradictions between the two neighbors and only urged them to maintain sharper vigilance against each other.  One week after the Doklam episode ended, Indian Prime Minister Narendra Modi attended the BRICS summit in China's resort city of Xiamen. Since China is already at the center of international political power, India needs BRICS more. In December, foreign ministers meeting of Russia, China and India in New Delhi showed that despite bilateral conflicts, Beijing and New Delhi have wide-ranging common interests on regional and global affairs, and multilateral mechanisms are still important platforms for the two to launch pragmatic cooperation. In the 21st century, India still sees South Asia as its courtyard and tries to bar regional countries from forging closer cooperation with China. For instance, India rejected Sri Lanka's request for building the Hambantota port, but hypes China threat when Sri Lanka turned to China for help. Recent Nepali election is also a case in point. In fact, China can encourage Nepal's newly-elected prime minister to make India the destination of his maiden visit to help improve China-India-Nepal relations.  Chinese Foreign Minister Wang Yi said recently that the handling of the Doklam standoff through diplomatic means safeguarded China's sovereign rights and interests and territorial integrity as well as realigned the development of Beijing-New Delhi relations in the right direction. It means China, in keeping with the principle of defending its sovereignty, views cooperation with India as the right way in the development of ties.  Wang also underlined China's resolution to "be deeply involved in global governance, guiding economic globalization toward a more inclusive and beneficial rebalance." In addition, he reiterated China's commitment to implementing the 2030 Agenda for Sustainable Development, advancing international cooperation on climate change and terrorism, participating in drawing up rules in emerging fields like the Internet and outer space, and opposing protectionism in all its manifestations. China and India have huge potential of cooperation in these areas. 2017 is the worst year for China-India relations. But if India would like to meet China halfway and make concerted effort, 2018 will probably become the best year for their bilateral ties.