BRI NEWS Why have the ties between Asia and Europe grown stronger?

Why have the ties between Asia and Europe grown stronger? 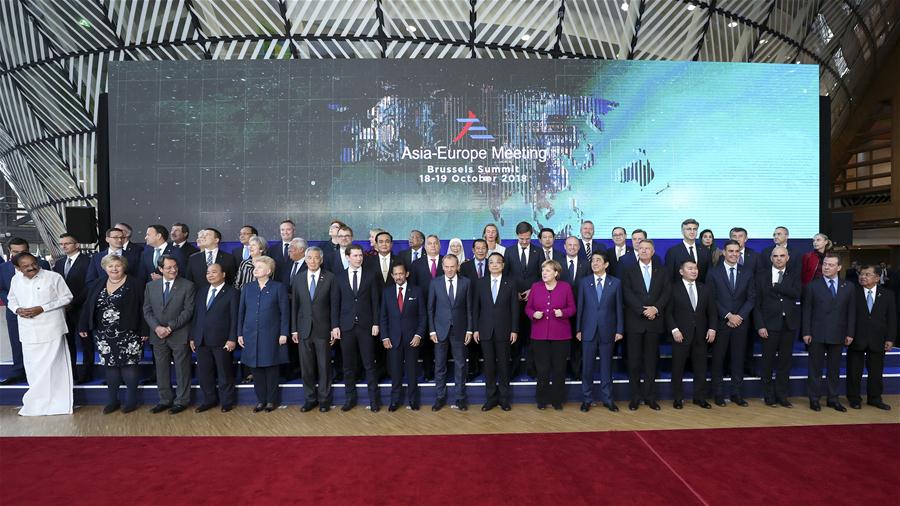 Representatives from 51 countries from Asia and Europe, and leaders from the European Union and the Association of Southeast Asian Nations, released a joint statement at the conclusion of the two-day Asia-Europe Meeting on Friday. The statement pledged a greater commitment to open and free trade, and to fight against any form of protectionism. It also endorsed the Iranian nuclear deal and the fight against global climate change. What was it that united so many countries from across the two continents?

The United States' aggressive trade protectionism has imposed major challenges on the participants in the world economy. It has levied large additional tariffs on imports from China. And it has accused the European Union of being too slow in fulfilling its promises to open up its markets to more competition; U.S. Secretary of Commerce Wilbur Ross ominously warned the Europeans recently that "The president's patience is not unlimited." This warning came shortly after the United States, Mexico, and Canada agreed to the terms of a new free trade agreement. The United States insisted that it include a clause limiting the signatories from entering into free trade agreements with what it considers a "non-market country", which is understood to mean China. The United States has said it will impose similar clauses on its agreements with the European Union and Japan. By imposing limits on the ability of the world's largest economies to enter into other trade deals, the United States is risking a fragmentation of the global economy.

While seeking to restrict the freedom of other countries to negotiate new agreements, the United States has been quick to walk away from many of its own obligations as a responsible global citizen. It has repeatedly blocked the appointment of World Trade Organization appeal judges, putting the operation of the WTO's dispute settlement system in jeopardy. It withdrew from the Trans-Pacific Partnership Agreement and the Paris climate change agreement. It pulled out of United Nations organizations including UNESCO and the Human Rights Council. And now it is threatening to leave the Universal Postal Union.

In the face of the White House's "America First" approach to diplomacy, governments across Europe and Asia are realizing the benefits of working together to respond to the challenges posed by the behavior of the United States. It's perhaps no coincidence that the theme of the Asia-Europe Meeting was "Global Partners for Global Challenges". Federica Mogherini, Vice President of the European Commission and the high representative of the Union for Foreign Affairs and Security Policy, was quick to say that it was not an "anti-Trump" gathering. But German media has pointed out that Mogherini also said "We have our agenda. It is a very clear agenda. It is an agenda that supports multilateralism - starting from the United Nations system - climate change action, free and fair trade, non-proliferation and international agreements that support the non-proliferation global architecture." It's therefore perhaps no surprise that The Irish Times ran an article calling discussions at the Asia-Europe Meeting a strong signal to President Trump.

As the Asia-Europe Meeting was convening, the European Union, Russia, China, and Norway brought the issue of President Trump's steel and aluminum tariffs to the World Trade Organization, asking for an investigation of the claim that the tariffs were justifiable on national security grounds. This joint venture by countries from both Asia and Europe shows their firm objection to American unilateralism. And it demonstrates their strong willingness to safeguard the multilateral system of global trade.

Countries across Asia and Europe have also been working together to improve their infrastructure connectivity, mutual investment, and trade. Both China’s Belt and Road Initiative and the EU-Asia Connectivity Strategy provide new opportunities for the further integration of the two continents. The trade in goods between China and the European Union is currently worth more than 1.5 billion Euros each day; enhanced connectivity will only serve to fuel economic development on both sides.

The ties that help to unite Asia and Europe extend beyond the purely economic sphere. There is a lot of common ground when it comes to other major global concerns. On the issue of climate change, Asian and European leaders share many of the grave concerns raised by the latest report from the United Nation's Intergovernmental Panel on Climate Change. There is also a consensus to support of the Paris climate change agreement – which the United States withdrew from last year. And on the issue of the Iran nuclear deal, leaders from across Asia and Europe have a deep understanding of the importance of the deal, both as a way to deal specifically with the Iran nuclear issue, but also more broadly, because they know that upholding the validity of arms control agreements such as this are essential for ensuring security, peace, and stability in the international community.

The people across Asia and Europe are united in the belief that the world is a better place when it is governed by fair international rules, and when countries can enter into dialogue in the spirit of mutual respect. We can all only hope that, one day soon, the United States will remember that it once held these beliefs, too.