BRI NEWS Why Washington stabs Turkey in the back

Why Washington stabs Turkey in the back

Fresh turbulence erupted in the US-Turkish relationship on Friday. In a Twitter post, US President Donald Trump announced that he had authorized higher tariffs on imports from Turkey. "Aluminum will now be 20 percent and Steel 50 percent," because the Turkish Lira is sliding "rapidly downward against our very strong Dollar," he said. Trump also put it bluntly that "Our relations with Turkey are not good at this time!" 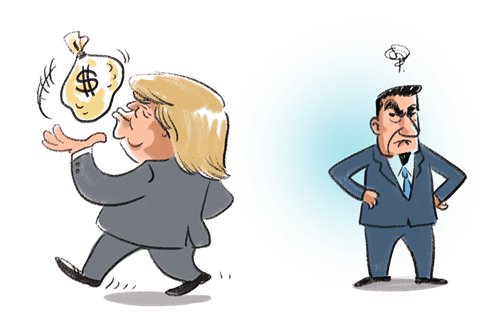 After Trump's tweet, the Turkish Lira dropped 18 percent, the biggest one-day drop since the country's financial crisis in 2001. Turkish President Recep Tayyip Erdogan outrageously claimed that Turkey was a "target of economic war." He also stated that "we fight this war of independence and the future."

Turkey is a crucial ally of the US in the Middle East as well as the only Islamic country in NATO. Being a transcontinental Eurasian nation, Turkey controls the only passage between the Black Sea and the Mediterranean. It is also the most industrialized and secularized Islamic country in the Middle East. No strategist would believe that the US has any reason to abandon Turkey.

But Uncle Sam, which is now advocating "America first," has changed its previous approach and is stabbing its ally Turkey in the back. Obviously, it hurt Ankara.

The pattern of the Cold War has come apart and the value of allies is changing. While Washington wants to maintain its alliance system, it also wishes to dredge money from allies which the US once aided economically. In terms of US Middle East policy, Washington has deviated from the previous framework. As a result, the US and Turkey are no longer on the same page about their mutual recognition and common interests. The two are becoming alienated from each other.

An arrogant Washington couldn't care less about Turkey's role in the Middle East. The White House is now disinclined to go gentle on Turkey, its crucial ally during the Cold War, and has started to whip Ankara.

There was a time when "alliance" meant joint defense against threats. But Washington has expressed many times lately that when the US provides security protection, its allies must foot the bill. As far as Washington is concerned, there should be nothing to complain about when the US overcharges its allies a little. Make them pay for US troops? That's how it should be. The US is planning to build a Space Force, attempting to make the country powerful enough to command the entire world, making its allies have no alternative but to fawn to Washington.

Trump slapping tariffs on Turkey is both a lesson for Ankara and a warning to other US allies: No one should place its own importance above the interests of the US.

Given US strategic selfishness and mercilessness when turning against its allies, it is dangerous to rely too much on the country for its economy or its security.

Turkey is geographically close to Europe and is inextricably connected with the West economically and politically. Meanwhile, it is improving ties with Russia and Iran and is supportive of China's Belt and Road initiative. How Turkey adjusts its strategy in a global arena will have great significance for the world.