BRI NEWS With or without a trade deal, the yuan is poised to be a strong currency

With or without a trade deal, the yuan is poised to be a strong currency 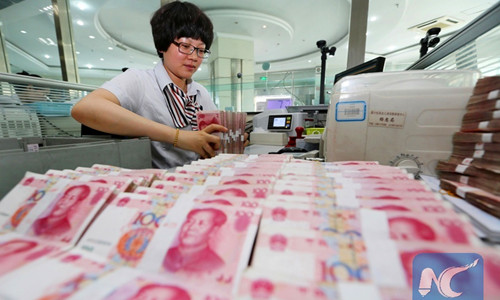 A prolonged, bitter trade war between China and the US sent the yuan on a roller-coaster ride in 2019. Markets are now breathing a sigh of relief as the Chinese currency had a stable finish in 2019 and continues to gain momentum in 2020.

It rallied past the key threshold of 7 to the dollar last week and stood on solid ground in the first two trading days of the new year. China's central bank set the yuan's midpoint rate at 6.9450 per dollar on Wednesday - its highest fix since August 5, when the yuan broke through the psychologically important mark of 7 to the greenback.
Market observers attributed the yuan's stellar rise to bullish market sentiment, boosted by positive signs from both China and the US indicating the imminent conclusion of a phase one trade deal which was announced by Beijing and Washington in December.
Admittedly, signs that the interim trade pact is on track to be hammered out have buoyed market confidence. But with or without a trade deal, one thing is for sure: The yuan is poised to become a strong global currency in the medium term and the long term, given China's resolve to promote a strong currency, backed by solid economic fundamentals and the integration of its financial markets with the global market.
The yuan could become a prominent global reserve currency on par with the euro and the US dollar much quicker than most observers believe possible. China's economy continues to grow at a speed triple that of the US, and China's technological innovations are rapidly catching up to international peers.
China is highly motivated to pursue a stronger yuan as it continues to open its domestic financial markets to foreign capital, and as Chinese firms are expanding their footprints globally. Therefore, it makes sense for China to promote its own yuan-denominated assets as potential alternatives to dollar-denominated ones.
Indeed the yuan has experienced a bit of drama last year. In August, a sharp escalation of the bruising China-US trade war sank the yuan under the key 7-per-dollar level for the first time since the 2008-09 global financial crisis. Immediately following the currency's plunge, the US treasury labeled China a "currency manipulator."
The drama fanned a false narrative that China deliberately embraced a weaker yuan to cope with the trade war. Contrary to the US' declaration, the drop was a normal market reaction to the escalating trade tensions. It was in China's best interests to stabilize the yuan, preventing capital outflows and stabilizing the forex market.
As China continues to pivot its economy away from a reliance on exports, its currency policy is no longer designed to flatter exports. Instead, its currency is increasingly driven by onshore and offshore market performances.
Key factors that impact capital flows into China, a country with strong capital account oversight, include economic fundamentals, interest rate spreads between China and other major economies, the maturity of its capital market and the cost of cross-border forex transactions.
Calculating these factors, it is easy to conclude that the yuan has huge potential to become a strong currency.
China's economic fundamentals are intact even if its growth shifts to a lower gear. Mainstream economists and institutions estimate China's annual GDP growth will be between 5 and 6 percent in the next five years. Even a 5-6 percent growth rate would be the envy of other major economies and would be sufficient to keep the yuan stable.
The same logic applies to interest rate spreads. Considering many major economies' negative interest rates and below 2 percent annual growth, the yield of yuan-denominated assets stands out and thus its yield spread with other currencies.
A slew of structural reform measures to open China's financial and banking sectors to foreign investors have boosted market confidence and signaled the yuan's growing strength.
In September, China scrapped quotas for the dollar-denominated Qualified Foreign Institutional Investor (QFII) scheme and its yuan-denominated sibling, RQFII, allowing overseas investors unfettered access to China's stock and bond markets. It removed ownership limits for futures companies from January 1. Limits on the foreign ownership of mutual fund management will be scrapped on April 1 of this year, and similar limits for securities companies on December 1. Further financial deregulation and opening measures are also in the pipeline.
As China continues to optimize its market structures, a growing number of global index compilers - including the FTSE Russell, the Bloomberg Barclays US Aggregate Bond Index and the MSCI - have added Chinese stocks and bonds to their benchmarks.
As yuan-denominated assets are increasingly traded in global markets, they will drive up the demand for the currency and its value will rise.
Such a trend parallels a global "de-dollarization" move. The dollar's international standing has been undermined by the trade war the US launched against its trade partners and the sanctions it willfully imposes on others who do not yield to its bullying policies. Many countries have been prompted to double their efforts to create an alternative to the dollar for trade settlements and transfers.
The yuan is an ideal currency for diversification away from the dollar. In May, Japan, China, South Korea and ASEAN members agreed to add the yuan and the Japanese yen to their multilateral currency-swap arrangement to reduce reliance on the dollar. The share of global foreign reserves held in yuan has continued to rise, hitting a record high of 2.01 percent, equivalent to $219.6 billion, at the end of September 2019.
That is not to say that the yuan will replace the dollar as the world's dominant currency in the immediate future. But as long as China keeps its financial reforms on track, and continues to ease capital controls and remove barriers on foreign investment, the pace of the yuan's liberalization and internationalization will increase. There is no doubt that China's yuan will become a strong global currency.