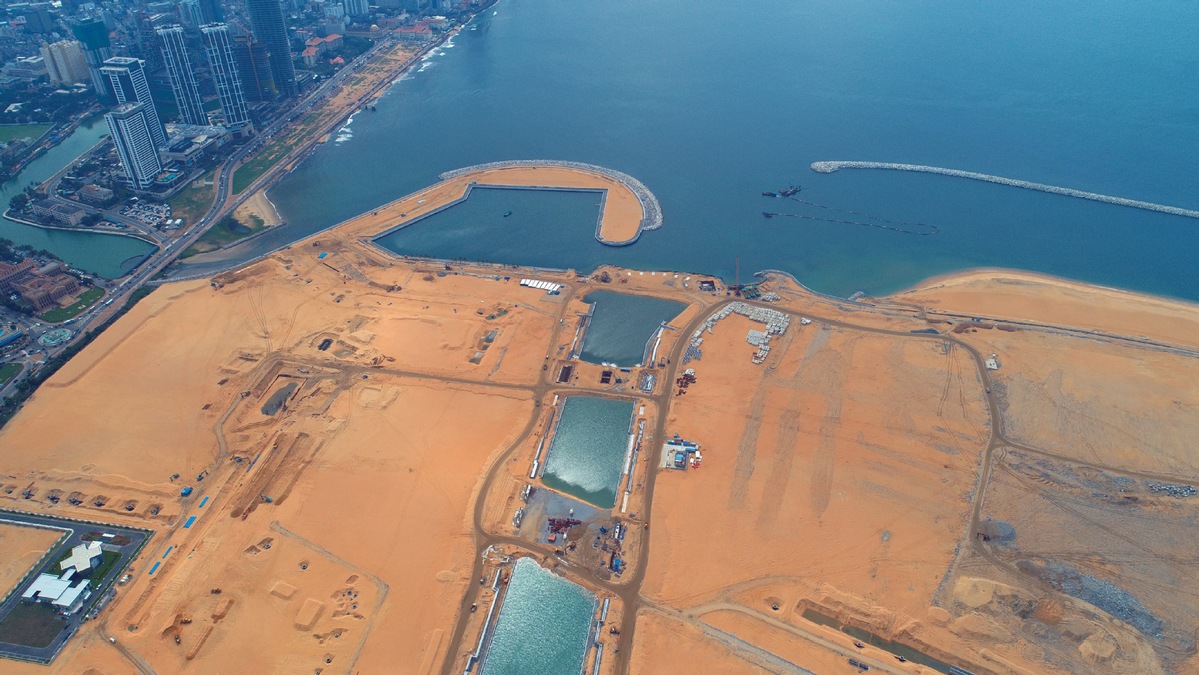 A general view of Colombo Port City construction site, which is backed by Chinese investment is seen through a glass window in Colombo, Sri Lanka, on Jan 11, 2019. (Photo: Xinhua)

Sri Lankan Prime Minister Mahinda Rajapaksa said on Saturday that his government will accelerate the development of the Colombo Port City project, constructed by China, to ensure that it will emerge as a new business hub in the island country.

Rajapaksa visited the Colombo Port City along with Chinese Ambassador to Sri Lanka Cheng Xueyuan and other government ministers and officially declared the 269 hectares of land reclaimed from the sea as part of the Colombo city district. Adjacent to Galle Face Green, the reclaimed land, is intended to extend the central business district.

A commemorative stamp and a first-day cover were also issued at a grand ceremony followed by an extended fireworks display.

Rajapaksa pledged to speed up the implementation of preferential policies for Colombo Port City as early as January and to strive to build the area into a new business card for Sri Lanka, according to a statement issued by Colombo Port City.

Colombo Port City was jointly developed by the Sri Lankan government and China's CHEC Port City Colombo Ltd. It is the country's largest foreign direct investment project and is expected to attract billions of US dollars in investments in the coming years.

It also aims to create more than 80,000 jobs and to transform Sri Lanka into a regional business and financial hub.

China and Sri Lanka enjoy a strong, long-standing friendship, which has laid the foundation for practical cooperation, said Rajapaksa, who assumed office on Nov 21.

The new prime minister said that he did not believe that Sri Lanka's engagement with the China-initiated Belt and Road Initiative amounted to a "debt trap" as portrayed by some Western media.

"We are very confident that Sri Lanka can very clearly repay the loans for the Hambantota Port and other development projects," Rajapaksa said.

According to a statement by the Chinese embassy in Sri Lanka on Dec 2, the two countries have agreed to further strengthen political trust between them and upgrade their pragmatic cooperation.