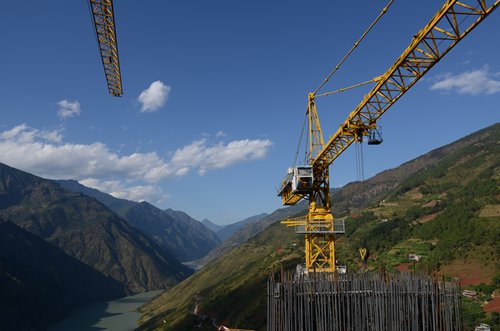 Cranes operate 480 meters above the Jinsha River at the construction site of the Jin'an Jinshajiang Bridge on Thursday. (Photo: Global Times)

Construction on the world's longest suspension bridge over a canyon being built in Southwest Yunnan Province passed a major milestone on Thursday with the capping of a 228-meter-tall tower, which at its peak stands almost half a kilometer above the Jinsha River.

"The capping of the main tower means construction is 40 percent finished, and we are ahead of schedule," Wen Dongwei, the construction team's Communist Party of China branch secretary, told the Global Times.

Work on the tower on the east bank of the Jinsha River was completed by capping it with cement. The top of the tower stands 480 meters above the river.

Construction of the Jin'an Jinshajiang Bridge near the city of Lijiang began in April 2017. It is being built by the Second Highway Engineering Co, a subsidiary of the Xi'an-based China Communications Construction Company.

The bridge will significantly reduce travel times between cities in Yunnan and Sichuan provinces. The current six-hour dive between the ancient city of Lijiang in Yunnan to the city of Panzhihua in Sichuan will be cut to just two hours.

According to a statement the company sent to the Global Times on Thursday, the bridge will also serve a bridgehead role for China to connect to the ASEAN, as well as a key project in the Belt and Road initiative