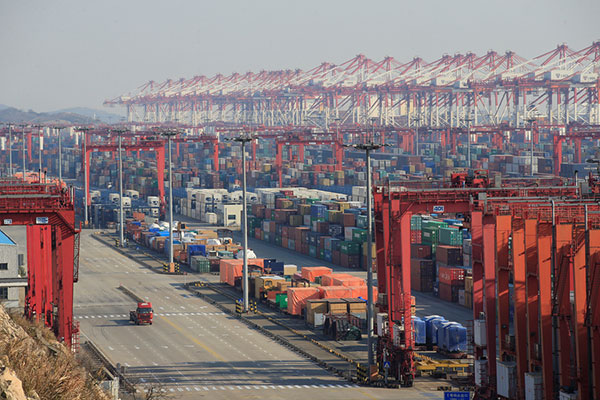 Enhanced joint efforts are needed to support a rule-based multilateral trading system and facilitate investment around the world, officials from WTO member countries said on Tuesday.

Over 200 attendees, including ministers or representatives from 33 World Trade Organization members and WTO director-general Roberto Azevedo, were invited to the small-scale ministerial meeting in Shanghai. It was the second time China had held such an event since it joined the WTO in 2001.

In the meeting, ministers or their representatives agreed that the rule-based multilateral trading system should be firmly supported, and international trade should play a role in driving economic growth, job creation and sustainable development, according to a statement from China's Ministry of Commerce.

They also supported necessary WTO reforms and called for resolving the issue of appellate body appointments-which have been blocked by the United States-and working on issues such as fishery subsidies, the statement said.

In his opening speech, Commerce Minister Zhong Shan said unilateralism and protectionism have been rising, while the authority and effectiveness of the WTO have been challenged.

China is calling on all parties to firmly support the multilateral trading system, resolutely oppose unilateralism and protectionism, help with necessary WTO reform and safeguard the core values of the international organization, Zhong said.

The ministers issued a joint statement at the luncheon, which said that the goal of the investment facilitation issue is to develop a multilateral regulatory framework and create a more transparent, efficient and predictable environment for cross-border investment.

Hong Xiaodong, director of the Department of WTO Affairs under the Commerce Ministry, said investment facilitation was a new topic actively promoted by WTO members during the event.

"As the world economy is still facing many uncertainties, investment can play an important role in bringing new growth points to countries and regions across the world. Therefore, it is important to develop an investment facilitation framework," Hong said at a news conference.

The ministerial meeting kicked off on the same day as the second China International Import Expo. The CIIE illustrates the country's endeavors to further open up and widen market access, in line with the global multilateral trade rules.

Daryoush Ziai, CEO of Schindler China, said the expo is a good platform for global firms to display their advanced products and technologies and also serves as a bridge between participants around the globe.

Schindler Group is the Swiss manufacturer of elevators and escalators. At the expo, the company highlighted its new technology solution called Schindler Ahead, which captures real-time data and uses big data analysis and artificial intelligence to predict maintenance needs.