Starting in September, residents of Xi'an, capital of Northwest China's Shaanxi Province will be recorded in China's social credit system if they refuse to observe local garbage sorting regulations. 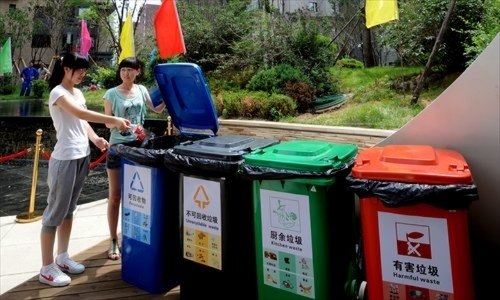 The move is a part of nationwide efforts to improve social management.
The Xi'an government requires its residents to sort their waste into at least four categories - recyclable, hazardous waste, kitchen and other waste. Those who refuse to fulfill the obligation will be recorded under the personal credit system or will be fined up to 200 yuan ($28).
The social credit system is used to regulate behavior of the public and improve the overall social credibility. Individuals who have been included in the system may be refused access to plane and high-speed train travel.
A manager, surnamed Tao, at a garbage classification company based in Xi'an, told the Global Times on Thursday that residents in the city lack of awareness of waste sorting and the credit system is expected to nurture a good habit.
Tao also suggested the city government to promote the importance of waste classification to residents before implementing the measure.
Residents are forbidden from mixing industrial solid waste, construction waste, medical waste and animal carcasses in household garbage. Each residential area should have at least one "recyclable" and one "hazardous waste" collection container, the regulation says.
Individuals, garbage collection and transporting organizations will also face penalties if they mix different types of waste. The penalty imposed on individuals will be between 100 yuan and 200 yuan, while organizations can be fined up to 30,000 yuan.
Other cities have established their own local social credit system to improve social management. Xiamen, capital of East China's Fujian Province, has included information on people who fail to properly sort garbage into its social credit system since 2017.
The municipal government of Beijing is using the system to police the behavior of citizens riding the city's subway, including eating on the subway and listening to loud music.
China plans to build a government-led national social credit system by 2020 to assess individuals, enterprises and government agencies in four areas - administrative affairs, commercial activities, social behavior, and the judicial system, according to an outline issued by the State Council in 2014.