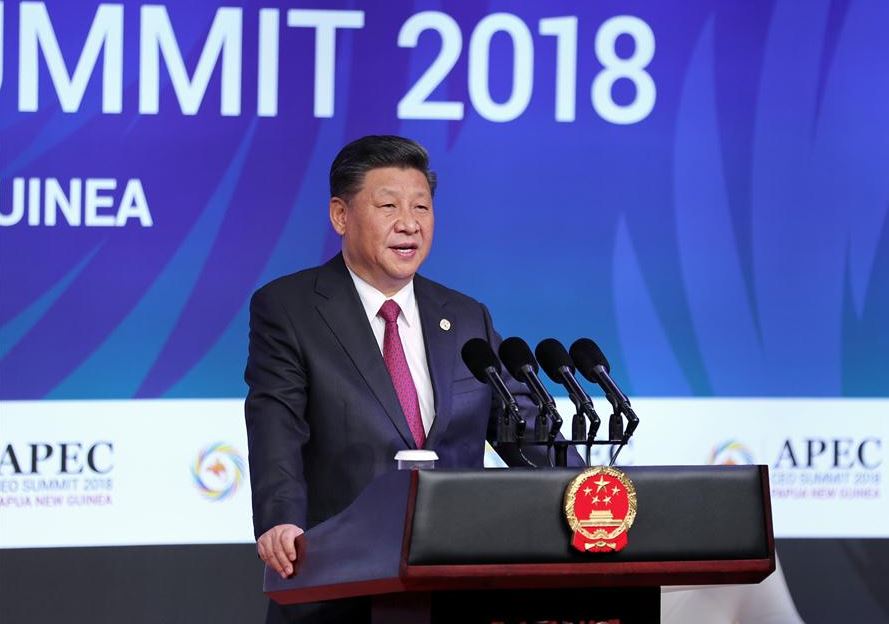 In a keynote speech to the business leaders, Xi urged the international community to hold on to the right direction of world economy and work out an efficient global governance system.

"As we brave the rough waters of the global economy and confront the many risks and challenges, it is all too befitting that we have come together on this ship to chart the course for future development and cooperation," Xi said on board cruise ship Pacific Explorer in the Papua New Guinea (PNG) capital of Port Moresby, where the summit was held.

While achieving its own development, China will make greater contributions to helping countries around the world realize shared prosperity, Xi said.

In April next year, China will host the second Belt and Road Forum for International Cooperation in Beijing, the Chinese president announced, adding that the Belt and Road Initiative (BRI) is a major and transparent initiative with which China shares opportunities and pursues common development with the rest of the world.

"Mankind has once again reached a crossroads," he said. "Which direction should we choose? Cooperation or confrontation? Openness or closing one's door? Win-win progress or a zero-sum game? The interests of all countries and indeed, the future of mankind hinge on the choice we make."

Recalling the establishment of APEC, Xi said its birth and growth echoed the historical trend of openness and integration, the region's fervent desire for development and the people's need to meet challenges through cooperation.

Today's Asia-Pacific has the world's most dynamic and promising economy, which is recognized as a key engine driving global growth, he said.

"The world today is going through major development, transformation and change. While economic globalization surges forward, global growth is shadowed by protectionism and unilateralism," said the Chinese president.

A new revolution in science, technology and industry is in the making; but old driving forces are yet to be replaced by new ones, Xi said.

The international landscape is undergoing profound changes, but imbalance in development is yet to be addressed, he said, adding that the reform of the global governance system is gathering momentum, but improving its efficiency remains a major challenge.

The Chinese president made a five-pronged proposal on world economic development and global governance.

First, it is advisable that the economies focus on openness to create more space for development.

He called for efforts to build a free trade area of the Asia-Pacific (FTAAP).

"We should say no to protectionism and unilateralism, uphold the WTO-centered multilateral trading system, make economic globalization more open, inclusive, balanced and beneficial to all, and expand converging interests and share opportunities through opening-up and cooperation," he said.

Secondly, it is advisable to focus on development to deliver more benefits to the peoples, Xi said.

The economies should strengthen cooperation and help developing countries eliminate poverty so that people in all countries will live better lives. "This is what fairness is essentially about," Xi said.

He also called on the economies to make the 2030 Agenda for Sustainable Development a part of their national development strategies and forge equal and balanced global development partnerships.

Developed countries should honor their commitments on official development assistance and increase support to developing countries, he said.

The principle of "special and differential treatment," which is a cornerstone of the WTO, is not to be challenged. Otherwise the very foundation of the multilateral trading system will be shaken, he said.

Thirdly, the economies should focus on inclusiveness and promote interactions.

Diversity and interaction between different civilizations, social systems and paths can provide strong impetus for human progress, he said.

"We should reject arrogance and prejudice, be respectful of and inclusive toward others, and embrace the diversity of our world," he said, adding that "we should seek common ground while putting aside differences, draw upon each other's strengths and pursue co-existence in harmony and win-win cooperation."

When it comes to choosing a development path for a country, no one is in a better position to make the decision than the people of that country, he said.

Fourthly, the economies should focus on innovation to tap new sources of growth, Xi said.

"What we should do is to lose no time in making every effort to explore new growth drivers and development paths, and remove all institutional obstacles holding back innovation," he said.

He called on the economies to boost innovation and market vitality, steer the new scientific revolution and industrial transformation in the right direction, foster an enabling environment for international cooperation that will deliver the fruits of innovation to more countries and peoples.

Fifthly, the economies should focus on a rules-based approach to improve global governance.

"We should advance the reform of the global governance system on the principle of conducting consultation and collaboration for shared benefits," he said.

This reform should be advanced on the basis of equality, openness, transparency and inclusiveness, he said, adding that developing countries should have more say and greater representation in this process.

Over the past 40 years, the Chinese people, with vision, hard work and perseverance, have forged ahead and taken a historic stride, Xi said.

"We have stood up, become prosperous and grown in strength. We the Chinese nation are moving forward toward great rejuvenation," he said.

With enterprise and grit and through self-reliance, the people have turned China into the world's second biggest economy, he said. "It is the relentless efforts of the Chinese people that have made China what it is today."

Over the past 40 years, the Chinese people have embraced the world with open arms, Xi said, China has pursued its development through opening-up.

As a result, Xi noted, China has become the world's biggest trader of goods, the biggest tourism market and a major trading partner with over 130 countries.

The Chinese people have pursued development with a single focus and made lives better for ourselves, he said.

Guided by a people-centered development philosophy, China has made remarkable achievements which make the people now feel more secure and have a greater sense of fulfillment and contentment, he said.

Xi said that the Chinese people have pursued their own development to achieve development for all.

China has stayed on the path of peaceful development, got actively involved in global economic governance, and actively supported other developing countries in their development, he said.

Xi said China has implemented responsible macroeconomic policies and contributed a significant share of global growth, and that the country has played its part in responding to the Asian financial crisis and the global financial crisis.

By so doing, China has contributed its vision and input to building a community with a shared future for mankind, Xi said.

Going forward, China will take an even more responsible approach, be even more open and inclusive, and strive to achieve even higher quality of growth, he said.

"By doing so, as it develops itself, China will make greater contributions to the common prosperity of the world," he said.

Xi pledged that China will continue to significantly expand market access, strengthen IPR protection, and do more to increase imports, adding that China views all companies, both Chinese and foreign, as equals.

"China welcomes and encourages fair competition among them, and will fully protect their legitimate rights and interests," Xi said.

Recalling the first China International Import Expo (CIIE) successfully held in Shanghai a week ago, the president said with such actual steps, China has demonstrated its commitment to trade liberalization and opening-up of its market.

"I wish to welcome you all to the second CIIE to be held next year," he said. "I am confident that the large market of China, with a population of close to 1.4 billion, will be a source of dynamic growth for the global economy."

Calling the business community "an important force" driving the economic development of the Asia-Pacific and the wider world, Xi urged the business leaders to continue to share their insights with decision makers, encourage countries to adopt positive and practical policies and carry out extensive economic and technological cooperation.

"Together, we can open a new horizon for the common development and prosperity of the Asia-Pacific and the world at large," Xi said.

"Let us keep the steering wheel steady and paddle in the right direction so that the ship of the global economy will brave winds, break waves and sail to a brighter future," he said.

Later on the day, Xi also attended a dialogue between APEC leaders and representatives from the APEC Business Advisory Council, and exchanged with them views on building an open world economy and jointly building the Belt and Road.