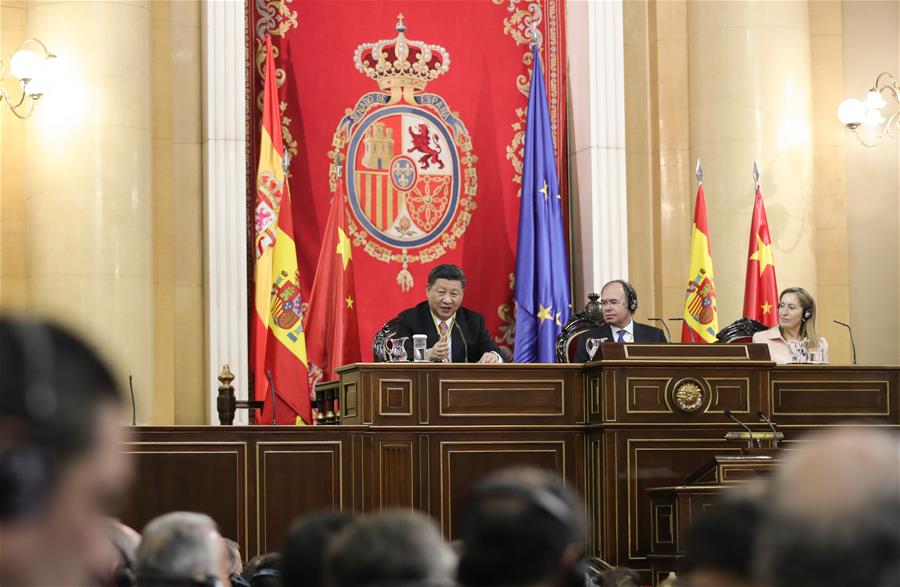 Both China and Spain have followed a development path that suits their own national conditions over the past four decades to achieve national prosperity and social progress, Xi said when addressing the two houses of Spanish parliament, the Senate and the Congress of Deputies.

"China's door of opening-up will never be closed. It will only open still wider," he said.

Xi said that Spain is also forging ahead with determination and keeps improving through reforms, which has driven its economy and society on a new track of development.

The president hailed the time-honored history of friendly exchanges between the two countries, the outstanding examples of Eastern and Western civilizations.

Xi noted that China is willing to maintain high-level exchanges with Spain, continue to render each other mutual understanding and support on their respective core interests and major concerns, and keep firmly in mind the correct direction for bilateral ties.

He proposed that the two sides build greater synergy between their development visions and strategies, and jointly promote the Belt and Road Initiative.

The two countries should also expand people-to-people and cultural exchanges, and increase communication and cooperation in international affairs, he said.

The Spanish parliament can play an important role in enhancing political mutual trust between the two countries, promoting people-to-people exchanges and deepening their friendship, Xi said.

China values its friendly exchanges with Spain's Senate and Congress of Deputies, he said.

Xi voiced the hope that members of the Spanish parliament continue to be devoted to the China-Spain friendship and make their contributions to the bilateral ties.

Spain's Senate President Pio Garcia-Escudero, on behalf of the Senate and the Congress of Deputies, extended warm welcome to President Xi for the state visit.

He said that China has become the highest-level partner of Spain and the bilateral relations have entered the best period in history.

The Spanish side admires China for its remarkable achievements in reform and opening-up, and highly appreciates China's important role in the international arena, he said.

Spain is willing to strengthen cooperation with China in all areas and in global affairs, deepen exchanges between the legislatures, and promote mutual understanding and friendship between the two peoples, thus pushing for a continuous development of the Spain-China relations, he added.

After delivering the address, Xi visited the library of the Senate, accompanied by Garcia-Escudero and President of the Congress of Deputies, Ana Pastor.

Before the speech, Xi was presented with commemorative medals of the two houses.

Spain is the first stop of Xi's ongoing Europe and Latin America tour, which will also take him to Argentina, Panama and Portugal.

In Buenos Aires, Argentina, Xi will attend the 13th Group of 20 summit.