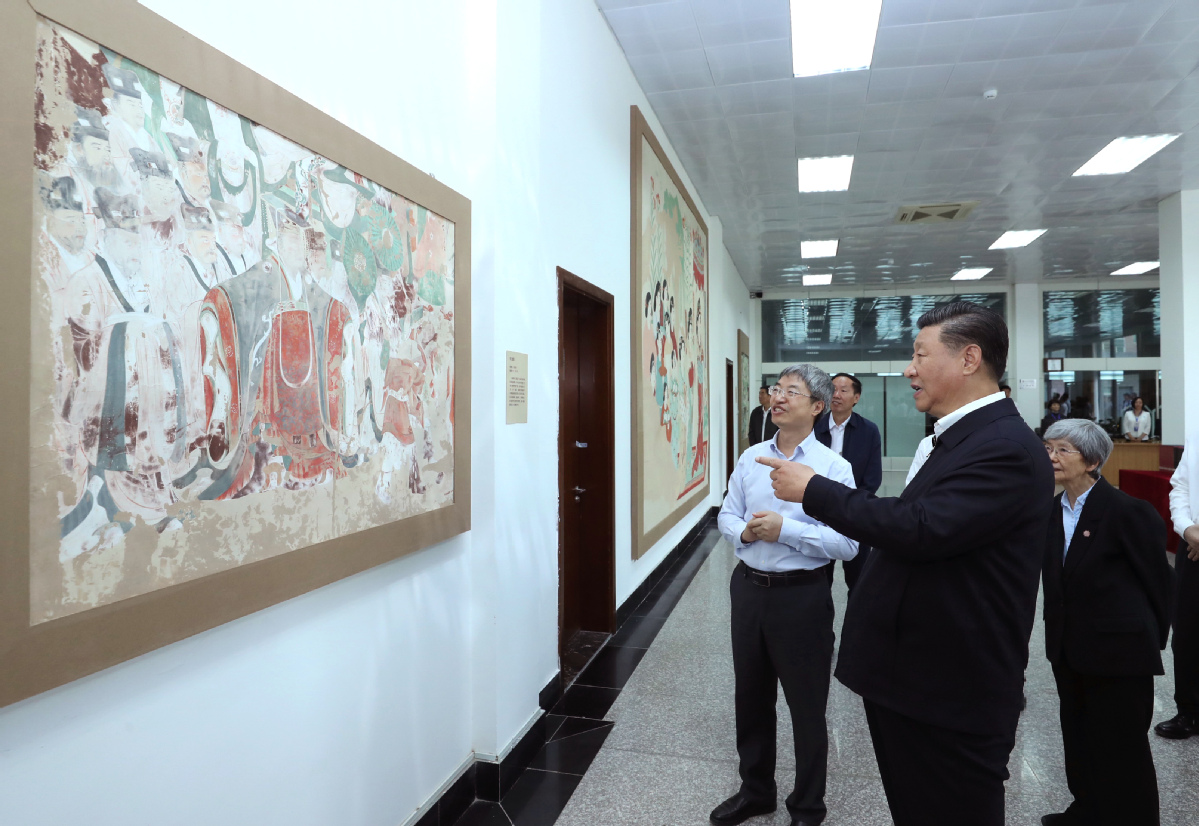 At Dunhuang, site of celebrated grottoes, he says 'quintessence' of nation should be promoted to the world

With a long history and splendid cultural heritage, Dunhuang in northwest China's Gansu province has long been seen as a precious pearl along the Silk Road, where different cultures met and conducted exchanges.

So when President Xi Jinping began a four-day inspection tour in Gansu province last week, he made the first stop at Dunhuang, home of the UNESCO World Heritage Site Mogao Grottoes, as he sees the fine traditional culture as important in rejuvenating the Chinese nation and promoting inclusive international cooperation on the Belt and Road Initiative.

Touring the grottoes, Xi, who is also general secretary of the Communist Party of China Central Committee, inspected the work of cultural relics protection and research, and stressed the need to preserve the finer features of the nation's culture.

At the Dunhuang Academy, he learned from a local official of the production and performance of major cultural shows like Silk Road, Flower Rain, a classical Chinese dance drama, and their international exchanges.

Xi hailed the Dunhuang culture as a result of long-term cultural exchanges and mutual learning between Chinese and foreign civilizations, and called for more efforts in cultural interactions.

The president stressed the need to step up support in carrying forward and promoting the Dunhuang culture to preserve "our quintessence".

Dunhuang, an oasis located at a religious and cultural crossroads on the Silk Road, boasts more than 2,000 sculptures and 45,000 square meters of murals in 735 cliff caves.

Digging of the Mogao Grottoes began in 366. They symbolize the great achievements of China's Buddhist art from the fourth century to the 14th century. They also showcase the cultural integration and mutual learning among the diverse civilizations along the ancient Silk Road.

At a seminar attended by scholars, experts and officials in the Dunhuang Academy, Xi said that as the nation strives to rejuvenate its culture, it needs to be more inclusive to extensively develop cultural exchanges with other countries and actively draw on the outstanding achievements of civilizations around the world.

Dunhuang displays the Chinese nation's confidence in its culture, and only a self-confident civilization can absorb and draw on the achievements of other civilizations in an inclusive manner while maintaining its own features.

He encouraged cultural experts to tell the stories of Dunhuang and spread the voice of China to the rest of the world in an effort to promote international cooperation on the Belt and Road Initiative.

Fan Jinshi, an archaeologist who began working in Dunhuang in 1963 at the age of 25 and is now honorary president of the Dunhuang Academy, said she was excited at Xi's placing so much importance on the protection of cultural relics, China Central Television reported.

Xi mentioned many times in his remarks the need to increase support for the protection of cultural relics, Fan said, adding that he also suggested employing high technology in protecting cultural relics.

Xi has underlined the importance of preserving traditional Chinese culture on many occasions. Since he was elected the general secretary of the CPC Central Committee in 2012, he has often made stops at cultural heritage sites when conducting inspection tours nationwide.

In a written instruction to a national meeting on cultural relics protection in April 2016, Xi called cultural relics "a valuable legacy from our ancestors", and stressed that conservation will benefit future generations.

During a group study session of the Political Bureau of the CPC Central Committee in October 2014, Xi stressed that good governance of today's China requires an in-depth understanding of the nation's history and traditional culture, and must draw on the experiences and wisdom of ancient governors.

Xi has also talked about history and culture on international occasions, highlighting the importance of cultural exchanges in promoting relations between China and the rest of the world.

During his first overseas foreign visit to Italy this year, Xi told participants of a cultural event in Rome that both China and Italy have a long history and attach importance to the inheritance of cultures, which laid the foundation for the two nations to understand each other and have a long-standing friendship.

In March, when Xi visited France, French President Emmanuel Macron presented him with the original French version of An Introduction to the Analects of Confucius, which was published in 1688, as a national gift. It testifies to the long-standing cultural bonds between the two nations, which establishes a solid foundation for people of today to deepen their relationships.

Speaking at the opening of the Conference on Dialogue of Asian Civilizations held in Beijing in May, Xi called for exchanges and mutual learning among countries and cultures around the world to strengthen support for jointly building a community with a shared future for mankind.