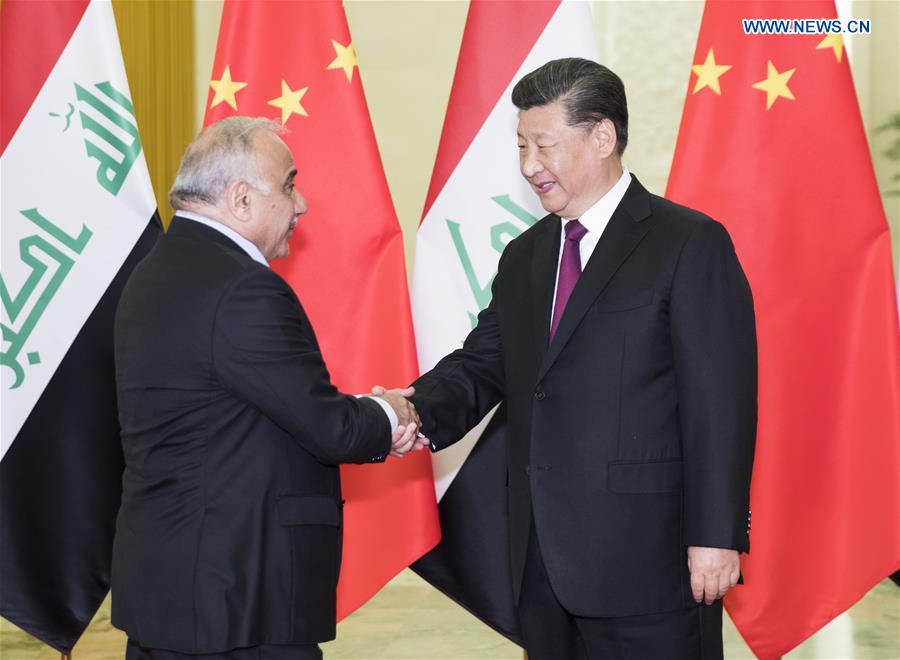 Chinese President Xi Jinping on Monday met with Iraqi Prime Minister Adel Abdul Mahdi on bilateral cooperation and the situation in the Middle East and Gulf Region at the Great Hall of the People in Beijing.

Hailing the two sides' traditional friendship, Xi stressed that China is ready to work with Iraq to push their bilateral strategic partnership to a new height from a new historical starting point.

China congratulates Iraq on its significant victory in the fight against terrorism and is willing to further actively support Iraq in its counter-terrorism and reconstruction efforts to realize long-term stability and development, he said.

China was the first country to participate in Iraqi economic reconstruction and continued its work for the longest period. China has the most widely distributed projects in Iraq in terms of geography and fields. Chinese companies remained in Iraq even when the security situation was at its worst, said Xi.

China is ready to enhance the integration of the Belt and Road initiative and the Iraqi reconstruction plan, Xi said, noting that both sides could push forward cooperation in petroleum, infrastructure and other fields.

The president also called on the two ancient civilizations to actively enhance people-to-people and cultural exchanges.

China hopes Iraq will continue to take tangible measures to ensure the safety of Chineses institutions and personnel in the country, Xi said, noting that both countries could strengthen security and law-enforcement cooperation.

The current situation in the Middle East and Gulf region is complicated and sensitive, Xi said, calling on relevant sides to keep calm, exercise restraint and solve differences and disputes through dialogue, negotiation and other peaceful means to jointly safeguard regional peace and stability.

China will maintain communications with Iraq and other parties on the situation, the president said.

Abdul Mahdi warmly congratulated the Chinese side on the 70th anniversary of the founding of the People's Republic of China.

China has always firmly safeguarded its own national sovereignty, independence and dignity, and has made great achievements in development, said the prime minister. On the world stage, China plays an important role in safeguarding peace, stability and harmony, he added.

As a nation that has experienced war and chaos, Iraq sincerely appreciates China's valuable support for the country's counterterrorism and reconstruction efforts, said Abdul Mahdi.

Iraq is ready to deepen bilateral pragmatic cooperation in various fields in the framework of the Belt and Road, the prime minister said.

On the regional situation, Abdul Mahdi said Iraq is committed to easing tensions and avoiding war. Iraq will enhance communication and coordination with China in this regard.

Abdul Mahdi is paying an official visit to China from Sept. 19 to 23 at the invitation of Chinese Premier Li Keqiang.