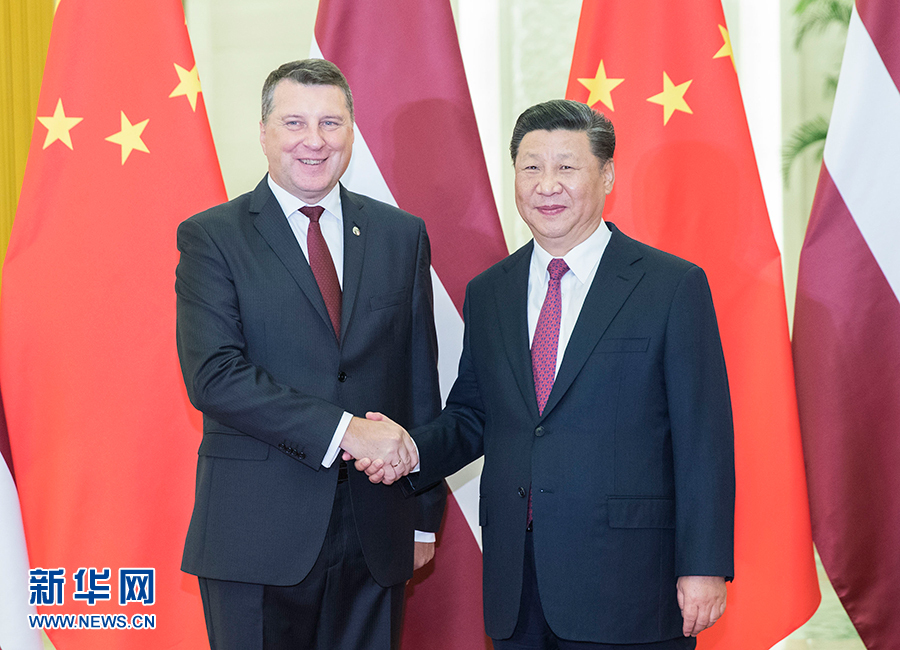 Vejonis is in China to attend the annual meeting of the Summer Davos Forum in north China's Tianjin.

"China stands ready to deepen political trust, expand economic and trade cooperation and enhance people-to-people exchanges with Latvia based on mutual respect and equality so as to benefit the two peoples," Xi said.

Noting that Latvia is the first among countries in the Baltic Sea region to sign a document on cooperation with China on the Belt and Road initiative, Xi said the two countries should facilitate the alignment of their development strategies, increase cooperation in such areas as logistics and infrastructure construction, and help promote interconnectivity between Asia and Europe.

"China and Europe, as two stabilizing forces in the world and two major economies, should strengthen strategic communication, maintain opening up to each other, and jointly uphold multilateralism and build an open world economy through China-Europe cooperation, to contribute to world peace, stability and development," said Xi.

This is the common responsibility China and Europe share, he said.

Deeming the cooperation between China and the Central and Eastern Europe Countries (CEEC) "an important component of China-Europe relations" as well as "a bridge connecting the Belt and Road initiative with Europe," Xi proposed China and Latvia step up cooperation within the framework of China-EU and China-CEEC cooperation mechanism.

Vejonis spoke highly of the China-proposed Belt and Road initiative and the China-CEEC cooperation mechanism, saying he hoped the two countries could strengthen cooperation in the fields of trade, investment, transportation, logistics and tourism, and people-to-people exchanges.

"Latvia is committed to promoting the development of Europe-China ties," said Vejonis.

Xi and Vejonis also witnessed the signing of cooperative documents after their meeting.