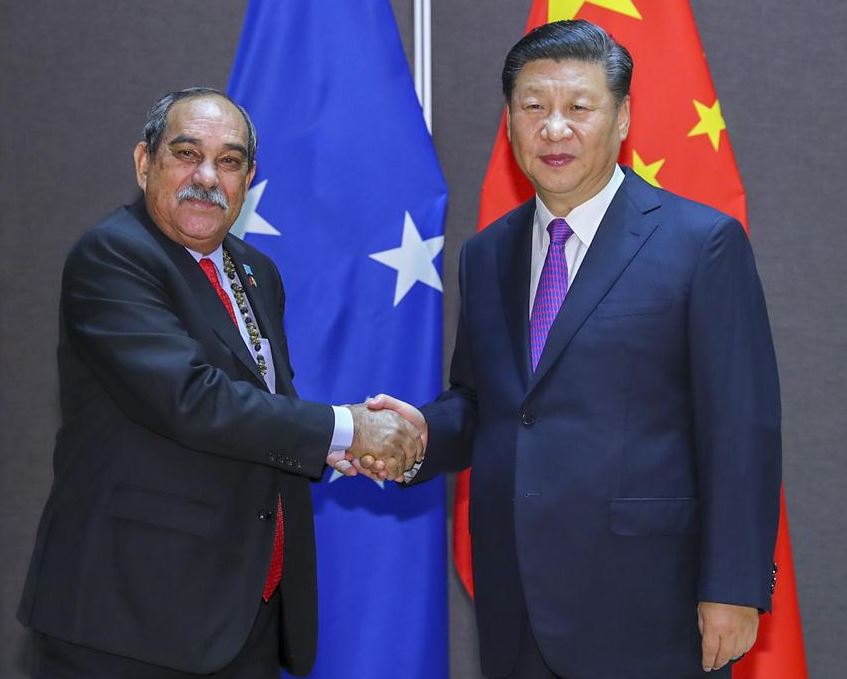 During the meeting with President of the Federated States of Micronesia Peter Christian, Xi said China appreciates the Pacific island nation's adherence to the one-China policy and is willing to uphold the principle of sincerity, real results, amity and good faith and the principle of pursuing the greater good and shared interests to enhance unity and cooperation.

Xi said he hopes both sides will well implement cooperation agreements reached by the two countries recently on jointly building the Belt and Road, promote cooperation in such fields as trade, investment, agriculture, fishery and infrastructure construction.

Xi said he wishes the tourism event held by China and Pacific island nations in 2019 a success.

Xi added that China is ready to support and help the Federated States of Micronesia in tackling climate change within the framework of South-South cooperation.

Christian, for his part, said his country highly values relations with China and spoke highly of China's stance that every country, large or small, is equal.

He said the Belt and Road Initiative (BRI) is quite important for the regional development and his country is willing to expand cooperation with China in trade and tourism, as well as to further communication and coordination on tackling climate change.

During the meeting with Prime Minister of Samoa Tuilaepa Malielegaoi, Xi pointed out that the bilateral relations face new opportunities for development.

He called on both sides to adhere to a high degree of political mutual trust, continue supporting each other on issues of their core interests and major concerns, expand cooperation in various fields within the BRI framework and enlarge people-to-people exchanges. He also said that China supports Samoa in hosting the 2019 Pacific Games and will continue supporting the country to improve its capability to tackle climate change.

Tuilaepa said since Samoa established diplomatic relations with China, it has firmly adhered to the one-China policy.

The prime minister expressed gratitude to China for helping his country in infrastructure construction, which is conducive to its strives to shake off the status of being a least developed country and promote its development.

He added that Samoa is willing to advance major cooperation projects with China under the BRI.

When meeting with Vanuatu Prime Minister Charlot Salwai, Xi said China-Vanuatu relations are at the best period of development in history.

China will support as always Vanuatu's national construction and sustainable development, encourage more capable enterprises to invest in Vanuatu, as well as promote cooperation in such fields as trade, infrastructure construction, transportation, communication, culture, education and healthcare within the BRI framework, Xi said, calling on both sides to strengthen coordination and cooperation in multilateral mechanisms.

For his part, Salwai agreed that bilateral ties are at the best period in history. He expressed gratitude to China for the long-term help as well as admiration for China's achievements in reform and development.

Pragmatic cooperation between the two countries are smoothly progressing in various fields, Salwai said, which has boosted the development of Vanuatu.

Vanuatu sticks to the one-China policy, appreciates the BRI and will actively participate in it, he said, adding that the country supports China's stance on major international and regional issues, he added.

In his meeting with Prime Minister Henry Puna of the Cook Islands, Xi said China and the Cook Islands have upheld sincere friendship, mutual respect and equal treatment since they established diplomatic relations 21 years ago, and have achieved mutually beneficial and win-win results.

Taking the signing of bilateral cooperation agreements on jointly building the Belt and Road as an opportunity, China is willing to consolidate friendship between the two peoples, and enhance communication and cooperation with the Cook Islands in such fields as economy and trade, tourism, culture and at local levels with the principle of achieving shared growth through discussion and collaboration, Xi said.

Puna said his country is proud of its good relations with China, which is based on mutual respect, non-interference in each other's internal affairs and equal treatment.

The Cook Islands sticks to the one-China policy and is grateful to China's support to the country in various fields including infrastructure construction, he said.

The signing of bilateral agreements on jointly building the Belt and Road has opened up broader space for cooperation, he added.

In his meeting with Prime Minister Samuela Akilisi Pohiva of Tonga, Xi said this year marks the 20th anniversary of the two countries' establishment of diplomatic ties.

China and Tonga have produced fruitful results in mutually beneficial cooperation in the past 20 years, Xi said.

China appreciates Tonga's firm adherence to the one-China policy and welcomes the country to actively participate in jointly building the Belt and Road, he said.

Xi said he hopes that the two sides tap into their potential, boost cooperation in such fields as trade, investment and infrastructure construction, and expand people-to-people, culture and local-level communication.

Tonga speaks highly of China as it treats the Pacific island nation as an equal partner and thanks China's valuable help, especially the recent visit of Chinese hospital ship Ark Peace to Tonga, Pohiva said.

Tonga sticks to the one-China policy, congratulates China on the success of the first China International Import Expo, admires China's foresight and prospect of development, and is delighted to join the Belt and Road cooperation, the prime minister said.

When meeting with Niue Premier Toke Talagi, Xi stressed that China will continue to follow a policy of pursuing the greater good and shared interests and uphold the principle of sincerity, real results, amity and good faith in developing its relations with Niue.

The Chinese side welcomes the active participation by the Niue side in the Belt and Road cooperation, so as to realize connectivity with countries in the region and beyond, he said.

For his part, Talagi said Niue adheres to the one-China policy and treasures the friendship and cooperation with China.

Niue speaks highly of China's active efforts in tackling climate change, appreciates China's support in such areas as transportation and infrastructure, and is ready to strengthen cooperation with the Chinese side in various areas and coordination on international affairs, Talagi added.

Xi also met with Fiji Defense Minister Ratu Inoke Kubuabola, who also serves as the representative of the Fiji government.

Kubuabola said Fiji hopes that it will work with China to further enhance pragmatic cooperation in various areas.