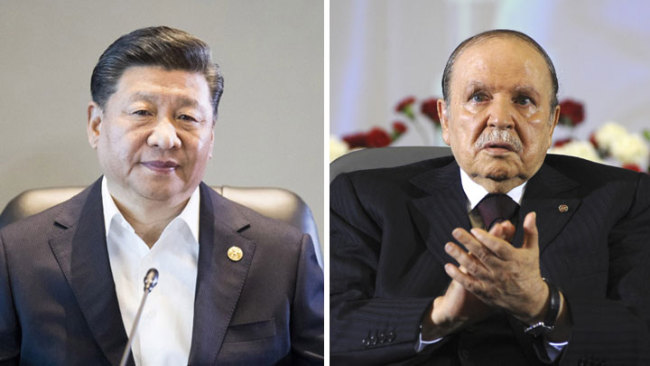 Thursday marks the 60th anniversary of the establishment of the diplomatic relationship between the two countries.

In a congratulatory message to his Algerian counterpart, Abdelaziz Bouteflika, Xi said China and Algeria have enjoyed profound traditional friendship, and China is the first non-Arab country to have recognized Algeria while Algeria is one of the first African countries to establish diplomatic ties with China.

Over the past six decades, the development of the China-Algeria relationship has always maintained good momentum, said Xi, adding that the two countries have made great progress in ties and achieved fruitful outcomes in cooperation in various areas since Beijing and Algiers formed the comprehensive strategic partnership in 2014.

Xi voiced hope that the two sides will take the anniversary as a new starting point in a joint effort to promote their friendship and mutually beneficial cooperation so as to lift their strategic partnership to a higher level and bring more benefits to the two countries and their peoples.

Bouteflika, in his message, said Algeria is willing to further consolidate political mutual trust with China, actively participate in the Belt and Road construction, and support the building of a community of shared future for mankind so as to lift the two nations' comprehensive strategic partnership to a higher level.

Li said Beijing attaches great importance to the development of its relations with Algiers, stands ready to work with it to implement the outcomes of the 2018 Beijing Summit of the Forum on China-Africa Cooperation, and deepen their cooperation within the framework of the Belt and Road Initiative so as to better benefit the two peoples.

Ouyahia said his country is willing to work with China to further strengthen their traditional friendship and deepen bilateral pragmatic cooperation.

In their congratulatory messages, Chinese State Councilor and Foreign Minister Wang Yi and Algerian Foreign Minister Abdelkader Messahel vowed to work with each other to promote bilateral comprehensive strategic partnership.