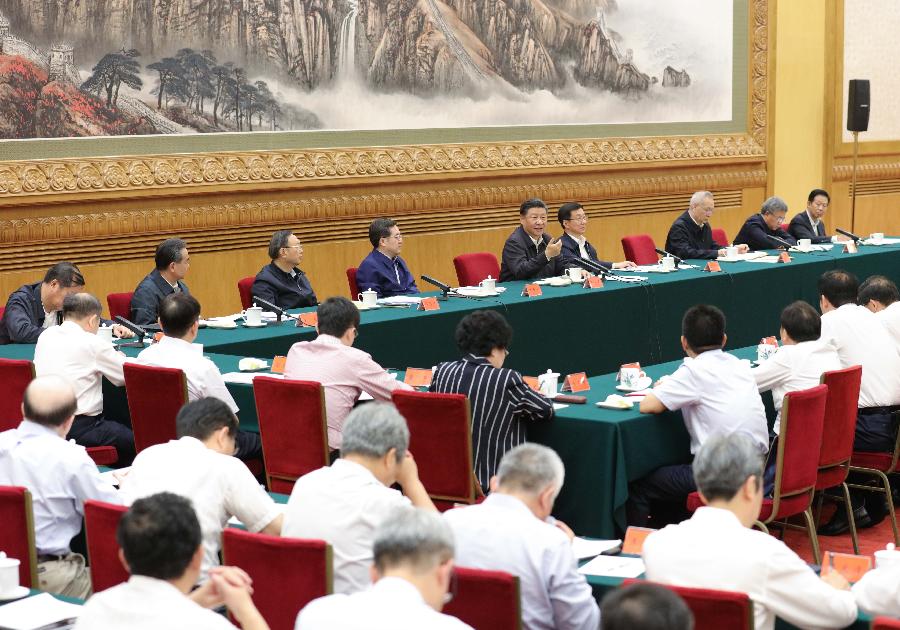 Chinese President Xi Jinping (C, rear), also general secretary of the Communist Party of China (CPC) Central Committee and chairman of the Central Military Commission, addresses a symposium marking the fifth anniversary of the Belt and Road Initiative (BRI) in the Great Hall of the People in Beijing, capital of China, Aug. 27, 2018. (Photo: Xinhua)

President Xi Jinping on Monday underlined thorough and solid cooperation under the Belt and Road Initiative (BRI) to benefit people in countries involved and build a community with a shared future for humanity.

Xi, also general secretary of the Communist Party of China (CPC) Central Committee and chairman of the Central Military Commission, addressed a symposium held in the Great Hall of the People in Beijing, marking the fifth anniversary of the BRI.

In the autumn of 2013, respectively in Kazakhstan and Indonesia, Xi proposed the building of the Silk Road Economic Belt and the 21st Century Maritime Silk Road -- the Belt and Road Initiative for short.

Xi stressed that the initiative serves as a solution for China to participate in global opening-up and cooperation, improve global economic governance, promote common development and prosperity, and build a community with a shared future for humanity.

China's trade with Belt and Road countries has exceeded 5 trillion U.S. dollars and outward direct investment has amounted to over 60 billion dollars, creating over 200,000 local jobs, he said.

Xi pointed out that jointly pursuing the BRI was not only aimed at economic cooperation but also an important pathway to improve global development patterns and global governance and promote the healthy development of economic globalization.

"The broad support for the BRI shows aspiration from countries involved, developing countries in particular, for peace and development," Xi said, noting the BRI is an initiative for economic cooperation, instead of a geopolitical alliance or military league, and it is an open and inclusive process rather than an exclusive bloc or "China club."

"It does not differentiate countries by ideology nor play the zero-sum game. As long as countries are willing to join, they are welcome," Xi said.

The next priority of jointly advancing the initiative is to realize its high-quality development, he said.

Xi asked for efforts to push for progress in Belt and Road projects, especially those delivering real benefits to local people, and keep expanding the market while maintaining the balance of trade.

He advocated a policy system on financial support for the BRI and encouraged non-governmental funds to invest in infrastructure and resource development projects in Belt and Road countries.

Work should be done to boost exchanges in areas of education, science, technologies, culture, sports, tourism, health and archaeology, he said.

He also stressed importance of intensifying the CPC's leadership over the joint development of the BRI.

Vice Premier Han Zheng, also a member of the Standing Committee of the Political Bureau of the CPC Central Committee and head of the leading group on advancing BRI development, presided over the meeting.