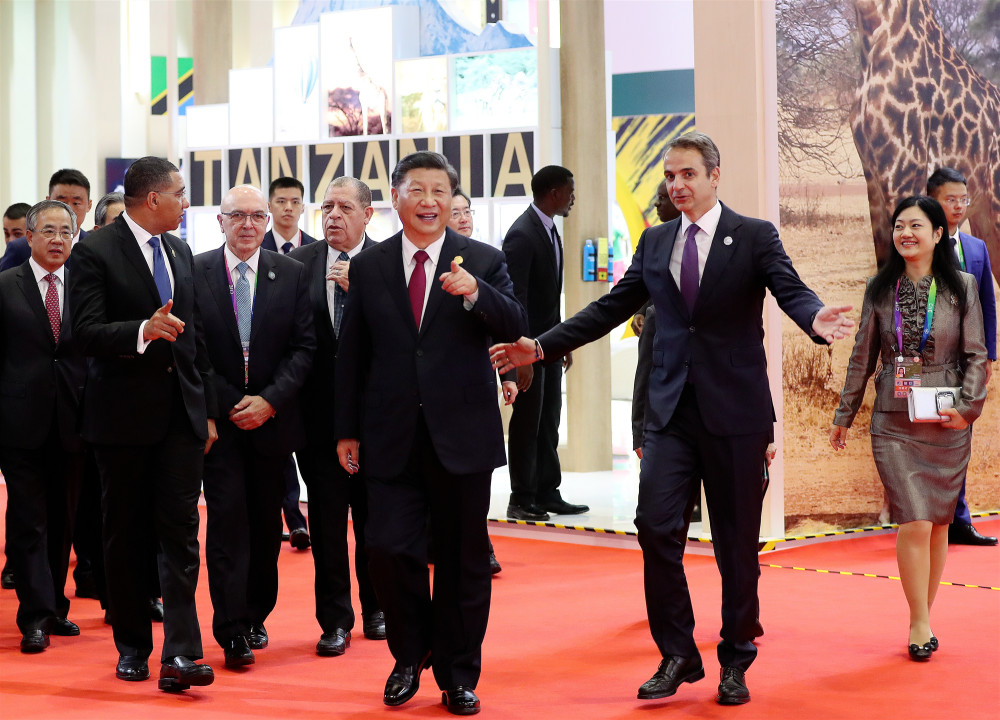 Nation will continue to lower tariffs, widen market access, he says in speech at start of import expo

President Xi Jinping reaffirmed China's commitment to opening its door wider with such measures as lowering tariffs and improving the business environment.

China will adhere to its fundamental State policy of opening-up, bringing it to an even higher level, Xi said in a speech on Tuesday at the opening ceremony of the second China International Import Expo in Shanghai.

"China will place greater importance on imports," Xi told business leaders at the expo. More than 3,800 enterprises and 181 countries, regions and international organizations are attending the expo.

As China has the largest middle-income population in the world, Xi said that the huge Chinese market has unlimited potential.

"Chinese people often say, 'The world is a big place, and I just want to see more of it.' What I want to say to you today is that the Chinese market is such a big one that you should all come and see what it has to offer," he said.

The president pledged to better leverage the fundamental role of domestic consumption in economic development and foster a more robust domestic market.

Xi added that China will continue to lower tariffs and transaction costs, develop demonstration zones to promote imports, and purchase more high-quality goods and services from around the world.

He said China will continue to encourage bold trials and experiments in pilot free trade zones and quicken the development of the Hainan Free Trade Port as pacesetters of opening-up.

Highlighting China's record in international cooperation, Xi said the country supports necessary reforms to the World Trade Organization to allow it to play a bigger role in promoting openness and development.

"China will be happy to conclude high-standard, free trade agreements with more countries," Xi said, adding that the country will speed up negotiations on a China-EU investment agreement, a China-Japan-Republic of Korea FTA, and a China-Gulf Cooperation Council FTA.

The president said China will continue to advance Belt and Road cooperation following the principle of extensive consultation, joint contribution and shared benefits.

China has signed 197 documents on Belt and Road cooperation with 137 countries and 30 international organizations.

In the speech, Xi pointed out that economic globalization is a historical trend, and no country can resolve by itself the problems confronting the global economy.

"We must all put the common good of humanity first rather than place one's own interests above the common interests of all," Xi said, and he called for joint efforts to "make the global market pie even bigger".

It is natural for countries to have differences and friction along with growing interaction, and the right solution lies in consultation and cooperation, Xi said.

"We need to join hands with each other instead of letting go of each other's hands," he added.

The president proposed to build an open world economy with innovation, saying that countries should remove barriers that hamper the flow of knowledge, technology, talent and other contributors to innovation.

He called for nations to work together to safeguard the international order underpinned by the purposes and principles of the UN Charter, uphold the core values and basic principles of the multilateral trading system, promote trade and investment liberalization and facilitation and make economic globalization more open, inclusive, balanced and beneficial for all.

French President Emmanuel Macron said in his speech that China's achievements in the past 40 years since reform and opening-up began have become an important turning point for the current global order.

China's success is attributed to its continuous efforts, and the country has not only benefited from but also contributed to economic globalization, Macron said.

Noting that unilateralism and protectionism cannot address the problem of unbalanced development, Macron said that there is no winner in a trade war, and multilateralism, free trade and a multilateral trading system should be maintained.

Paul Hudson, CEO of French pharmaceutical giant Sanofi, said at the expo that China's economic development has demonstrated speed and scope seen nowhere else in the world.

"It is exciting to see that China will further improve the business environment for foreign enterprises," Hudson said.

"We can see an acceleration, at a time when adverse forces are active in hindering global trade. Removal of joint venture equity caps, reduction of negative lists, new free trade zones and the Foreign Investment Law are welcome advancements and create a more favorable environment for foreign companies in China," Depoux said.