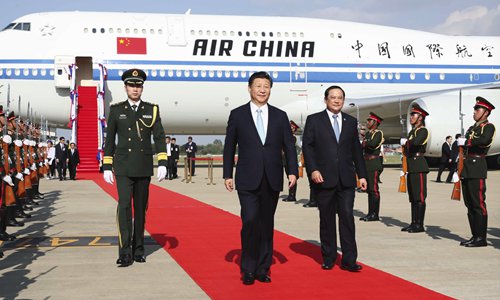 Chinese President Xi Jinping on Monday concluded his visit to Vietnam and flew to Vientiane for a state visit to Laos.Xi on Monday met with Bounnhang Vorachit, general secretary of the Lao People's Revolutionary Party (LPRP) Central Committee and president of Laos. He is also scheduled to meet Lao Prime Minister Thongloun Sisoulith, and President of the Lao National Assembly Pany Yathotu.In a speech he delivered upon his arrival at the airport, Xi extended sincere regards and best wishes to Laos, the Lao government and the Lao people on behalf of the CPC, the Chinese government and the Chinese people.As Communist-led socialist countries, China and Laos are truly "good neighbors, friends, comrades and partners," Xi said.Since the two countries established diplomatic ties 56 years ago, the traditional good neighborly and friendly relations have stood the test of international ups and downs, which have served to make them even stronger, Xi said.The in-depth development of bilateral comprehensive strategic cooperative partnership has not only brought tangible benefits to the two countries and peoples, but also contributed to the peace, stability and prosperity in the region and the world at large, he said."I believe with the concerted efforts of both sides, my visit will achieve our desired results, lift our relationship to a new high and bring greater benefits to our two peoples," he added.Gu Xiaosong, an expert on Southeast Asian studies at the Guangxi Academy of Social Sciences, told the Global Times on Monday that Xi's visit to Laos shows China's emphasis on neighborhood diplomacy and party-to-party exchanges."Although Laos is not heavily populated, it is located at the heart of the Indo-China Peninsula. Many economic corridors run through Southwest China's Yunnan Province to Laos and then to Thailand or Malaysia. This gives Laos a unique position in China's Belt and Road initiative," Gu told the Global Times.

Heartfelt welcomeWhen he arrived, Xi was greeted by senior party and state leaders of Laos at the airport.Huge portraits of Xi and Bounnhang, as well as banners bearing welcome slogans in the Chinese and Lao languages were seen hanging on the main streets of the Lao capital.Thousands of local residents, including young students, lined up along the streets, waving national flags of the two countries and cheering as Xi's motorcade passed by.Yao Bin, chairman of the Krittaphong Group, who greeted Xi at his hotel, told the Global Times on Monday that the Chinese president cares very much about overseas Chinese. "He asked me how many years I have been living in Laos, about my life and whether I have a prosperous business," Yao said. "We overseas Chinese business people are grateful for the new opportunities brought by President Xi, especially the Belt and Road initiative. A strong China also boosted our status in foreign countries," Yao further noted. Li Sijun, who heads the Yunnan State Farms Group's Lao branch, told the Global Times on Monday that he expects Xi's visit to boost the construction of the China-Laos Railway so that transportation costs from Laos to Southwest China's Yunnan Province can be substantially reduced. The Yunnan State Farms Group, based in Yunnan, is a key player in rubber plantation in Laos. "Since the Belt and Road initiative was launched, various levels of the Lao government began to show interest in Chinese companies. Laos is in urgent need of infrastructure, such as highways and railroads, and this is exactly what China's Belt and Road initiative is designed for," Li said. Vientiane is the final leg of Xi's first overseas visit since the 19th National Congress of the CPC, which was held in October.Prior to the Laos visit, he attended the 25th Asia-Pacific Economic Cooperation Economic Leaders' Meeting in Vietnam's central city of Da Nang and paid a state visit