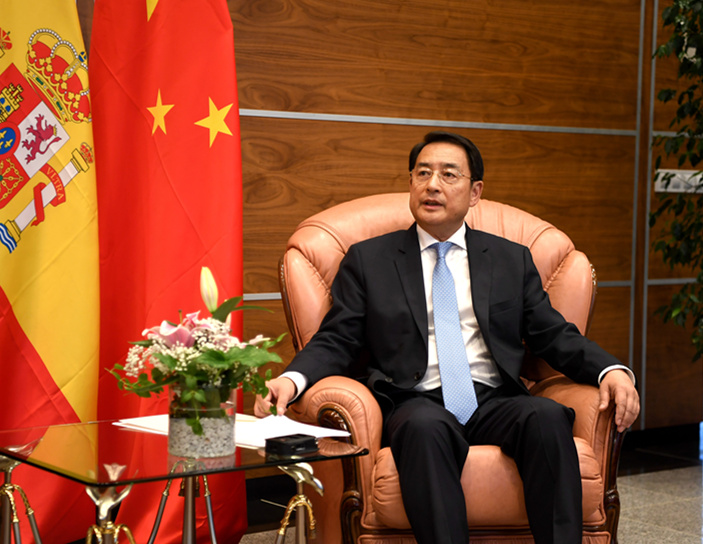 (Photo from the website of the Chinese embassy in Spain)

MADRID, Nov. 25 (Xinhua) -- Chinese President Xi Jinping's visit to Spain will open a new chapter for bilateral relations, and vitalize the China-EU relations in the midst of rising unilateralism, according to Chinese ambassador to Spain.

Xi will pay a state visit to Spain on Nov. 27-29, marking the most important event of bilateral ties this year.

Xi's visit to Spain, the first state visit to the country by a Chinese president in 13 years, falls on the 45th anniversary of the establishment of diplomatic ties between the two countries, Chinese Ambassador to Spain Lyu Fan told media.

Xi will exchange views with Spanish leaders so as to further develop the China-Spain comprehensive strategic partnership, promote the docking of the development strategies in the framework of China's Belt and Road Initiative (BRI), and strengthen bilateral cooperation in various fields, said Lyu.

The two sides will also conduct exchanges on both international and regional issues with common concern, and witness the signing of some cooperation agreements, Lyu added.

Important consensus that will be reached by the Chinese and the Spanish leaders will chart the course for future development of bilateral relations, said the ambassador.

Against the backdrop of rising unilateralism and protectionism, Spain is an active supporter of globalization and multilateralism, and shares broad consensus with China on safeguarding an open world economy, said Lyu, adding that Xi's upcoming visit is sending a clear signal that China, Spain, and the European Union (EU) will firmly safeguard multilateralism and a rules-based free trade system.

Xi's visit will be a fresh starting point for the comprehensive strategic partnership between the two sides to open a new chapter.

Noting that China and Spain "have a great interest in cooperation in the fields of aerospace, biomedicine and others," Lyu said the freight train between China's small commodity hub Yiwu and Spain's capital Madrid, which was put into service in November 2014, has become an important bridge of interconnectivity across the Eurasian continent, and also an early achievement of the BRI construction.

Investments from Chinese companies have rapidly increased in Spain in recent years, with a stock of more than 2.3 billion U.S. dollars, covering sectors including energy, agriculture, finance, logistics, telecommunications and infrastructure.

The bilateral trade volume has grown from 12 million dollars at the beginning of establishment of diplomatic ties to over 30.9 billion dollars in 2017.

Lyu said the first China International Import Expo (CIIE) held in Shanghai in early November provides Spain with a great opportunity to expand her exports to China, and hopes that the Spanish government could make the CIIE a platform to further explore and adapt to the Chinese market, promoting the exports of agricultural products, advanced services and technologies, as well as high-value-added products to China.

Xi's visit will also boost closer and more extensively engaged cooperation between the two countries in the field of education, the ambassador said.

China has officially included the Spanish language in its high school curriculum, and Spain will also make efforts to integrate the Chinese language into the Spanish national education system.

Lyu said with more people from the two sides knowing each other's language and culture, the China-Spain comprehensive strategic partnership will be further enhanced.