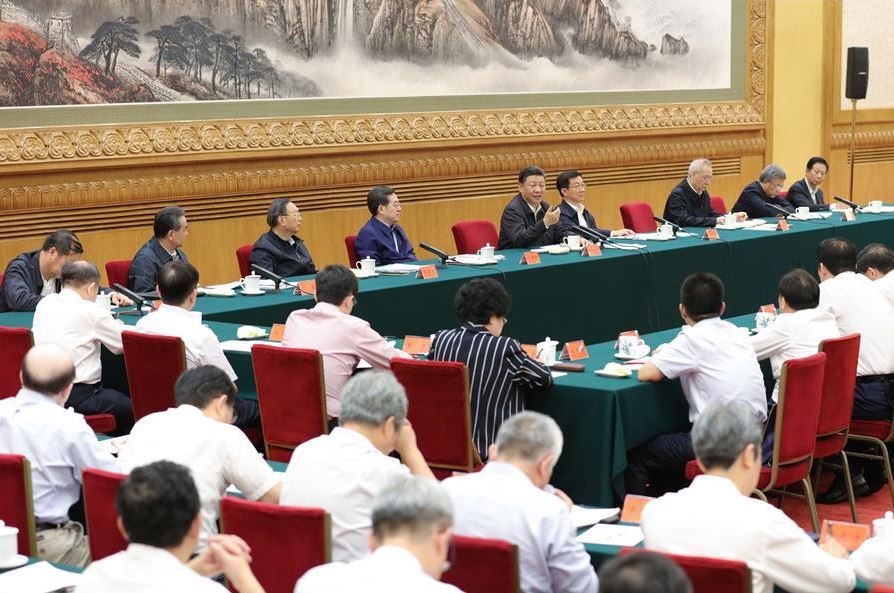 Chinese President Xi Jinping (C, rear), also general secretary of the Communist Party of China (CPC) Central Committee and chairman of the Central Military Commission, addresses a symposium marking the fifth anniversary of the Belt and Road Initiative (BRI) in the Great Hall of the People in Beijing, capital of China, Aug. 27, 2018. (Photo: Xinhua/Huang Jingwen)

BEIJING, Aug. 28 -- Chinese President Xi Jinping's speech on Monday reviewing the progress in the Belt and Road Initiative (BRI) cooperation has reaffirmed China's commitment to a path of common development and prosperity as well as improvements in the global governance system, commentators said.

In the speech delivered at a conference held here marking the fifth anniversary of the China-proposed initiative, Xi said the BRI, while offering new cooperation and growth opportunities, answers the call for change in the global growth mode and governance system by providing new options, and leads to a healthier economic globalization.

It aspires to build a community of shared future for mankind with both shared responsibilities and benefits, Xi said.

The remarkable achievements of the BRI in the first five years show it aligns with the interests of both China and the other participating countries, Julio Rios, a senior expert at the Galician Institute of International Analysis and Documentation, a Spanish think tank, said.

He called the initiative one of the best proposals in terms of international vision and global significance, saying: "Many countries have made it a new driver of their economic growth."

The initiative offers development opportunities for Africa, in addition to experiences to learn from, especially for countries like Tanzania that are pursuing industrialization, Honest Prosper Ngowi, an economics professor at the Mzumbe University, Tanzania, said.

"In practice, China's initiative takes into account the interests of all countries," Sergey Lukonin, head of economy and politics of China at the Russian Academy of Sciences, said. The BRI provides a chance for infrastructure construction in countries that do not have the means to develop their own facilities, he said.

Stephen Perry, chairman of Britain's 48 Group Club, praised the BRI as "the transformatory concept of this century," saying the growth potential brought by it lies not only in infrastructure construction but in the following urbanization process.

In addition, it offers a new perspective of shared responsibility and future for humanity in tackling common challenges, he said.

The experts said the inclusiveness and openness embodied in the BRI contribute to the important role it will play in improving the global growth mode, global governance and economic globalization.

The BRI calls for openness and boasts a global vision, said Berthold Kuhn, a China expert at the Free University of Berlin. It is of great significance to the international community and global governance system that China is seeking to expand cooperation within the BRI framework at a time when unilateralism is on the rise, he added.

Sudheendra Kulkarni, ex-chairman of Observer Research Foundation, an Indian think tank, said the BRI is leading to a new type of globalization by remolding the global governance system to be more representative, inclusive, open and fairer.

He said it is important that the initiative is based on extensive consultation, joint contribution and shared benefits, combining the roles of the government and market.

In his speech on Monday, Xi said the BRI is an initiative for economic cooperation, not a geopolitical alliance or military league. Also, it is an open and inclusive process rather than an exclusive bloc or "China club."

For Serbia's senior diplomat Zivadin Jovanovic, the BRI, in its implementation so far, has proved to be open to all countries and regions. It is by no means an exclusive club or politically binding.

Contrary to exclusiveness and protectionism, the BRI pursues connectivity, not only between lands but between people, he said.

David Gosset, a French expert in international relations and founder of the Europe-China Forum, said the initiative is a historic opportunity for most Europeans.

"Let us co-build the new Silk Roads, they are roads to prosperity and peace," he said.

Hassan Rajab, director of the Confucius Institute at Suez Canal University in Egypt, said China is trying to improve the world order by implementing the initiative. He expects it to succeed, he said, because China has adopted a win-win approach with other countries.

U Khin Maung Lynn, secretary-general of the Myanmar Institute of Strategic and International Studies, said Xi's speech will make people have a deeper understanding of the BRI.

The initiative seeks to make the global governance system better by adopting a new way of thinking and a new approach while highlighting the importance of collaboration and joint participation by different countries for economic globalization, he added.