In the scorching hot weather in the United Arab Emirates (UAE), some of the Gulf country's landmarks, including the world's tallest building Burj Khalifa tower and the seven-star luxury Burj Al Arab hotel, lit up the night sky by beaming the Chinese national flag and Chinese messages. 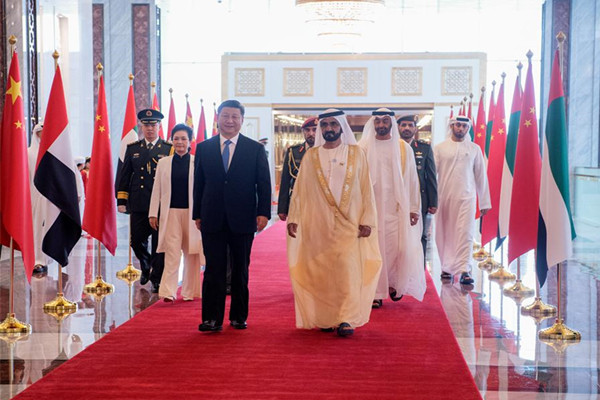 It's a great hospitality displayed by UAE leaders, who have pulled out all the stops in welcoming Chinese President Xi Jinping.

Xi on Saturday wrapped up his first state visit to the UAE, showcasing the great achievements and bright future of the mutually beneficial cooperation between China and the UAE, and the Arab world as a whole.

Xi's UAE visit is his first overseas trip since his re-election and the first stop of his current tour that will also take him to Senegal, Rwanda, South Africa and Mauritius.

As soon as his plane entered the country's air space, it was escorted by 12 UAE fighter jets.

Upon their arrival at the airport in the UAE capital of Abu Dhabi, Xi and his wife, Peng Liyuan, were warmly received by UAE Vice President and Prime Minister Sheikh Mohammed bin Rashid Al Maktoum and Crown Prince of Abu Dhabi Sheikh Mohammed bin Zayed Al Nahyan, in a state welcome that is offered only to the country's most important allies and most distinguished guests. 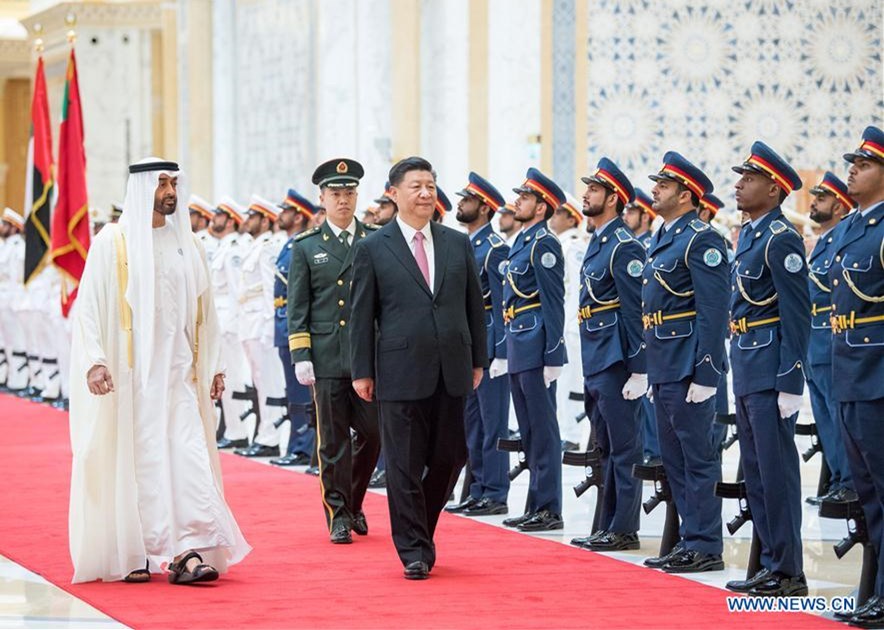 During the visit, the UAE leaders bestowed the Order of Zayed, named after the UAE's founding father, on Xi, the first Chinese head of state to visit the country in 29 years, at the Presidential Palace. The honor is rarely bestowed and reserved for the country's most esteemed partners among heads of state around the world.

Even before the visit, great enthusiasm and high expectations for Xi's trip already filled the hearts of many in the Gulf Arab state.

A Chinese-style "welcome gate" was erected on the road leading to the Presidential Palace, while Chinese and UAE flags were hoisted on the light poles along major streets of Abu Dhabi.

A series of Chinese cultural events were held in Abu Dhabi as part of the China Week running from July 17 to 24, with Chinese arts and crafts, paintings, calligraphy works, books and films on display.

China and the UAE have become bosom friends, who help and complement each other, and important partners, who always communicate and coordinate with each other on regional and international affairs,said Mohammed Al-Hammadi, editor-in-chief of Al Ittihad, a major UAE newspaper.

Xi's visit to the UAE underlined the earnest hope and strong resolve of the two countries to advance their friendly and cooperative relations to a higher level 34 years after they established diplomatic ties.

More importantly, this visit, which came on the heels of the eighth ministerial conference of the China-Arab States Cooperation Forum (CASCF) in Beijing, China, signaled the first concrete step taken by China to deliver its pledge to establish a future-oriented strategic partnership between China and Arab states.

During Xi's visit, China and the UAE agreed to upgrade their bilateral ties to a comprehensive strategic partnership, which opened a new chapter for strengthening bilateral cooperation.

The two sides also signed a number of agreements on implementing the cooperation projects under the Belt and Road Initiative.

The UAE leaders praised Xi's visit as a historic one that will help promote the development of bilateral strategic relations.

"We value this visit and consider it historic, as it establishes a new strategic stage in the relations of both countries," Sheikh Mohammed bin Rashid tweeted.

Sheikh Mohammed bin Zayed called Xi's visit on Twitter a "historic visit by all standards" that "heralds a new stage of cooperation between the two countries in all fields."

In a joint declaration, the two sides pledged to increase trade and reinforce complementary advantages by better facilitating trade and investment, jointly promoting the construction of a free trade zone, and turning their capacity cooperation demonstration zone into an example of their joint projects.

To further enhance mutual understanding, they promised to hold conferences and symposiums to discuss cooperation opportunities under the Belt and Road Initiative. The two sides also agreed to expand mutual investment, and tap the cooperation potential in areas like clean and renewable energy.

After 34 years of steady progress, China-UAE relations are now on the fast track, Chinese Ambassador to the UAE Ni Jian told Xinhua in a recent interview, referring to the fast-growing trade and cooperation in areas such as trade, finance, culture and tourism. 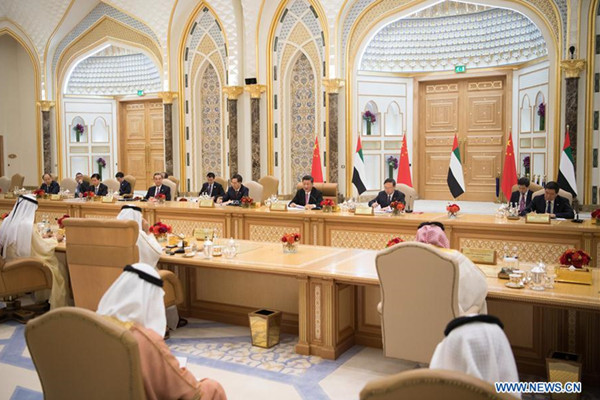 Sultan bin Ahmed Sultan Al-Jaber, UAE minister of state and chairman of the National Media Council, agreed, saying the bilateral relationship is a long-term strategic one in the political, economic, cultural, social and many other areas.

As a regional hub of trade, finance, logistics and tourism with its advantageous location and policies, the UAE now leads the Gulf countries in seeking closer cooperation with China.

The UAE has become China's second-largest trading partner and largest export destination in the West Asian and North African region, while China has been one of the largest trading partners of the UAE for several years. The trade volume between the two countries reached 41 billion U.S. dollars in 2017.

As the first Gulf Arab state to forge a strategic partnership with China in 2012, the UAE has signed a series of agreements with China, including a currency swap deal.

The Silk Road Fund, founded in December 2014, has been financing infrastructure projects in Dubai, including the Hassyan Clean Coal Project. The plant will provide 20 percent of the city's future energy mix once put into operation by 2020, when Dubai hosts the World Expo.

"This clean coal power station ... is a symbol of UAE-China green energy partnership, and a successful joint venture under China's Belt and Road Initiative," said Tie Sijia, deputy manager of the Hassyan project.

In a signed article published on major UAE newspapers on the eve of his visit, Xi called for building "a China-UAE community of shared future in Belt and Road cooperation."

Still, huge potential exists for further advancing China-Arab ties, as the China-proposed Belt and Road Initiative dovetails with the new development strategies of many Arab states which actively seek to transform their traditional oil-reliant economic models.

Both harboring dreams of rejuvenation, China and Arab states are embracing a brighter future in pushing forward their mutually beneficial cooperation and seeking win-win results.