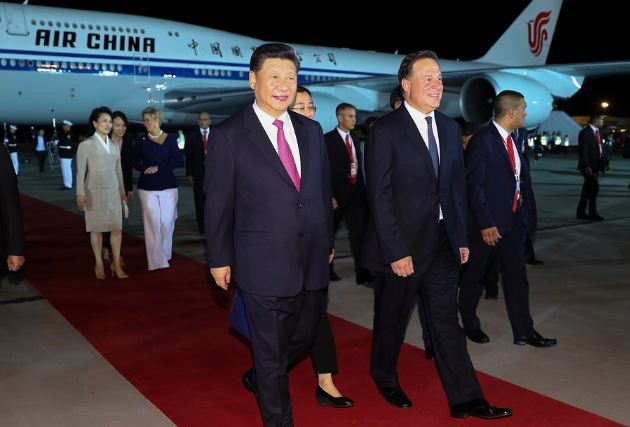 Chinese President Xi Jinping's upcoming visit to Panama will further accelerate the development of bilateral ties which has already got off to a strong start.

The bond between Chinese and Panamanians was forged over 160 years ago, when the first group of Chinese laborers arrived in Panama and made indelible contributions to the construction of the Panama Canal. But it was not until in 2017 that the old acquaintances were declared as formal friends based on the one-China policy.

According to Panamanian President Juan Carlos Varela, establishing diplomatic ties with China was "the right thing to do." The decision was lauded by Xi as "a feat of a hero."

Bilateral cooperation has been efficient since then and initial achievements were made in the past a year and half.

Direct flight, with a stopover in Houston, has linked Beijing and Panama City. Feasibility studies are underway for building a rail line connecting the Panamanian capital with the west coast province of Chiriqui, to facilitate cargo shipments.

The two sides are negotiating on a free trade agreement, and stepping up efforts to both grease the wheels for the flow of goods, and ease visa application process in a reciprocal way to promote tourism.

Panama was also the first Latin American country to have signed a memorandum of understanding with China to promote the Belt and Road Initiative.

The driving force behind such a strong partnership is not only market demands, but also the common will for win-win development. Under such circumstances, Xi's historic visit to Panama is expected to further consolidate the political mutual trust between the two countries and inject fresh impetus into the bilateral relationship.

The year of 2018 carries a significant symbolic meaning for China as it marks the 40th anniversary of its reform and opening up endeavor. China now seeks deepened economic reform and is launching more measures to further open up to the world.

Both staunch supporters of free trade, China and Panama are eyeing a more prolific future.

Currently, dozens of Chinese companies are investing in Panama in areas such as ports and highway construction, energy, retail sales and automobiles.

Panama also expressed its willingness to play an ambitious role in expanding the Belt and Road Initiative -- which originally envisioned developing a modern time Silk Road to bolster trade between Asia, the Middle East, Africa and Europe -- to Latin America.

Xi's visit at this moment will create an opportunity for the two sides to nail down more practical cooperation plans under the framework of the initiative and beyond.

It is also expected that the two leaders will map out a clear blueprint for cooperation between the two countries.

With such proactive efforts and goodwill gesture, the China-Panama friendship will set off on a new course and usher in an even brighter new chapter.