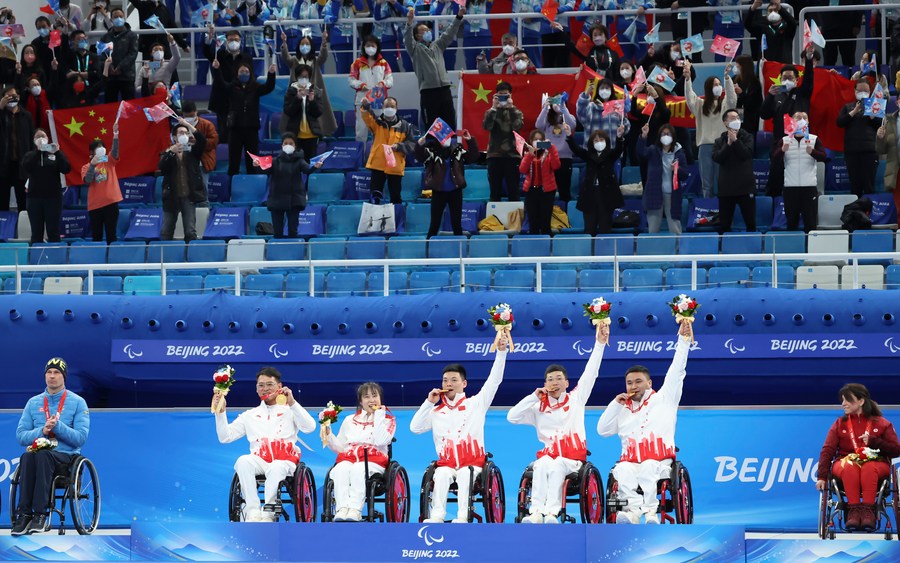 Players of China during the medal ceremony for the Wheelchair Curling event of Beijing 2022 Paralympic Winter Games at National Aquatics Center in Beijing, capital of China, March 12, 2022. (Xinhua/Lan Hongguang)

Many of the Chinese Paralympians have created history with their spectacular performance. For instance, Guo Yujie, a Para biathlete with left-hand impairment, pocketed gold in Para biathlon women's sprint standing on March 5. With it, the young girl who will soon turn 18 became China's first-ever female Winter Paralympic champion in an individual event.

At the Games, they, as well as Paralympians from around the world, have proudly proven that people with disabilities can still accomplish much with hard work and determination.

The Games have left a strong impression on everyone involved. In the view of Ileana Rodriguez, an accessibility expert on the International Paralympic Committee, the Beijing Games will not only leave a strong legacy, but also a culture that is more open to people with disabilities being active and being part of society.

China's success in hosting the Games is inseparable from its endeavors in recent years to improve the environment for people with disabilities. Under President Xi Jinping's leadership, China spares no efforts in helping the disabled secure better lives. 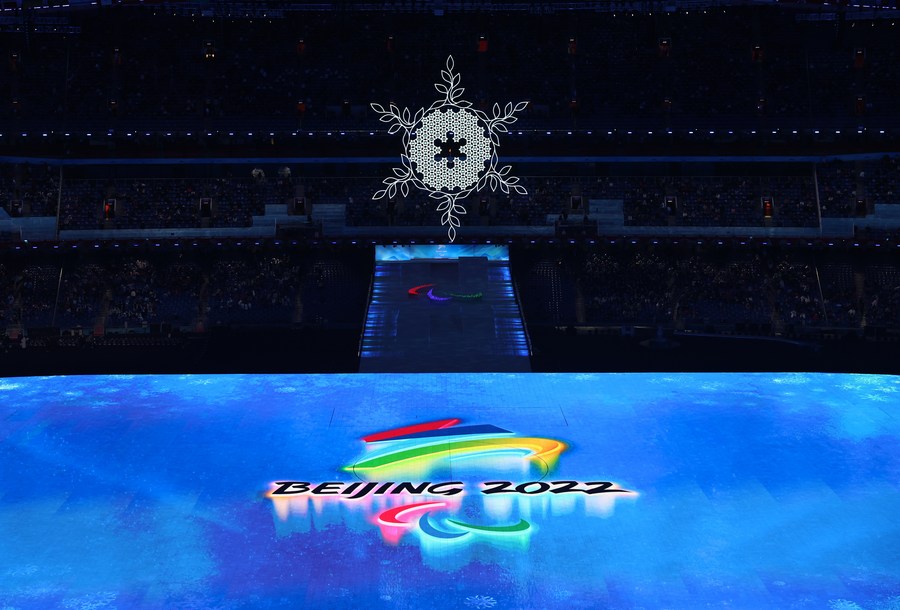 Photo taken on March 13, 2022 shows a scene before the closing ceremony of the Beijing 2022 Paralympic Winter Games at the National Stadium in Beijing, capital of China. (Xinhua/Zhang Keren)

Xi, also general secretary of the Communist Party of China Central Committee and chairman of the Central Military Commission, has emphasized that people with disabilities are equal members of the whole society. Over the years, he has given much care and attention to the disabled.

During a community visit in the central Chinese city of Wuhan in 2018, Xi thanked community worker and wheelchair user Du Chengcheng for her services interpreting movies for people with visual impairments since 2010.

He said to the residents of a paraplegic rehabilitation center, "If people in sound physical condition can live brilliant lives, people with disabilities can do that as well," during a 2016 visit to Tangshan in north China's Hebei Province, which was hit by a catastrophic earthquake in 1976.

In 2014, when visiting a welfare home for orphans and children with disabilities in Hohhot, Inner Mongolia Autonomous Region, he encouraged Wang Yani, who cannot hear or speak, to study hard to achieve her goals.

Deeply inspired by Xi's encouragement, Wang has realized her dream of becoming a teacher. She intends to pass on the skills she has learned to children with hearing and visual impairments so they too can go out into the world and serve society.

Wang is a prime example of an individual with a disability who leads a meaningful and upbeat life in China. Through the years, people with disabilities in China saw their access to education and employment steadily increasing.

Apart from boosting access to education and employment for the disabled, the Chinese government has in recent years taken measures to enrich their lives, including developing parasports.

According to a recent white paper on parasports, the participation rate in grassroots cultural and sports activities for people with disabilities in China surged from 6.8 percent in 2015 to 23.9 percent in 2021.

In January when Xi inspected preparation work for the Games, he saw that the cupboards in the accommodation for Paralympic athletes could be easily opened with a touch of the elbow. Xi lauded the facility, stressing the need to make facilities accessible and the importance of providing convenient, timely and meticulous services for athletes.

The Beijing 2022 organizing committee has announced that the barrier-free facilities in all venues for the Paralympics will be opened to the public after the Games to serve more people with disabilities and prompt the development of accessible infrastructure in not only Beijing, but also other parts of the country.

With the legacy of the Beijing Winter Paralympics, China will continue to strengthen both physical and mental support for people with disabilities so that they can lead better lives.