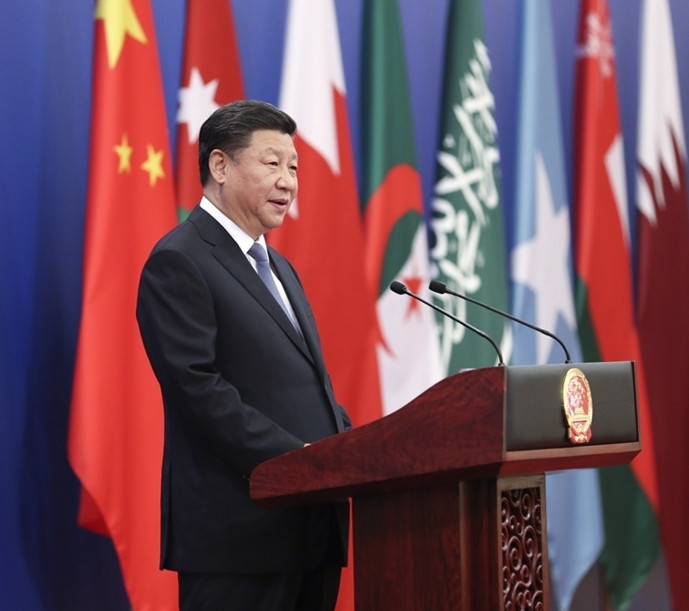 Chinese President Xi Jinping is to carry out a major diplomatic move from July 19 to 28, paying state visits to the United Arab Emirates (UAE), Senegal, Rwanda and South Africa, attending the 10th BRICS summit in Johannesburg, and visiting Mauritius during a stopover.

The overseas trip, his first after being re-elected Chinese president in March, is aimed at pushing for concerted efforts to further boost common development and improve global governance against the backdrop of profound changes in the international circumstances.

Xi's visit to the UAE will be the first by a Chinese head of state in 29 years. He is scheduled to meet with Sheikh Mohammed bin Rashid Al Maktoum, vice president and prime minister of the UAE, and the Crown Prince of Abu Dhabi Sheikh Mohamed bin Zayed Al Nahyan.

The UAE is the first Gulf country to forge a strategic partnership with China. In recent years, bilateral cooperation has enjoyed comprehensive, result-oriented, efficient and rapid development under the guidance and support of both countries' leaders.

The UAE-China strategic partnership covers not just one or two areas, but a variety of areas, UAE ambassador to China Ali Al Dhaheri said.

During Xi's upcoming visit to the Gulf country, the two sides are expected to attain a series of important outcomes in such cooperation areas as the Belt and Road Initiative, production capacity, energy, agriculture and finance, and further promote their strategic partnership.

The UAE is one of the first countries to embrace the China-proposed Belt and Road Initiative, and also a founding member of the Asian Infrastructure Investment Bank (AIIB).

China and the UAE have carried out extensive, in-depth and substantial cooperation within the framework of the Belt and Road Initiative, which plays a leading role in cooperation between China and other Arab countries, said Wu Sike, China's former special envoy on Middle East affairs.

"The development of China-Africa relations can only be in the present continuous tense, and never in present perfect tense," the Chinese president said in 2013 at a breakfast meeting with African leaders in Durban, South Africa.

Five years afterwards, Xi will embark on his fourth visit to Africa, home to more developing countries than any other continent, since he assumed office as Chinese president in 2013.

Xi's visit to Senegal will be the first by a Chinese head of state in nine years and his first visit to a West African country. Xi will hold talks with Senegalese President Macky Sall and witness the signing of a series of cooperation documents.

China and Senegal have seen sound and stable development of bilateral ties since the two countries resumed diplomatic relations in 2005. In 2016, Xi and Sall agreed to elevate the relationship to a comprehensive strategic partnership at a meeting in China's eastern city of Hangzhou.

Xi's Rwanda visit will be the first by a Chinese president. He will hold talks with his Rwandan counterpart, Paul Kagame, and the two leaders will witness the signing of multiple cooperation documents, which will lift bilateral practical cooperation to a higher level.

China, the largest trading partner of Rwanda, has been assisting and supporting the country in its reconstruction and industrialization process. "The Chinese bring along what Africa needs," Kagame has said.

Xi's visit will intensify China-Rwanda and China-Africa cooperation in such areas as politics, economy and social development, said Herman Musahara, a professor at the School of Economics at University of Rwanda, expressing the hope that the trip will also promote Chinese investment in Africa.

Xi's visit to South Africa will be his third state visit to the African country. Xi and South African President Cyril Ramaphosa will attend celebrations marking the 20th anniversary of bilateral diplomatic relations.

In Mauritius, the Chinese president and Mauritian Prime Minister Pravind Kumar Jugnauth will meet on ties and cooperation, as well as other international and regional issues of common concern.

China is the largest trading partner of Mauritius while Mauritius is the first country in Africa to have started free trade negotiations with China.

In the past five years, China and African nations have deepened political mutual trust, mutual assistance in development and mutual learning in visions, and made concerted efforts in building the Belt and Road and a closer China-Africa community with a shared future.

This year is a big year for China-Africa cooperation. Besides the Chinese president's upcoming trip to the four African countries, Beijing is scheduled to host a summit of the Forum on China-Africa Cooperation in September.

From July 25-27, Xi will join other BRICS leaders for a summit in Johannesburg. It will be the sixth consecutive time for the Chinese president to attend such meetings.

BRICS cooperation emerged during the rise of new global forces, and is now entering its second "golden decade."

On the international landscape, the world economy is enjoying sustained recovery, and the fourth industrial revolution is now in full swing. Meanwhile, global governance is faced with increasing challenges, with unilateralism and protectionism on the rise.

Against such a backdrop, how BRICS countries will take on their responsibilities and what kind of role they will play have caught the world's attention.

"The rise of trade protectionism has dealt a major blow to international trade and global economic recovery. The BRICS partners and the international community are all paying close attention to China's proposition of safeguarding an open global economy," said Mauricio Santoro, a professor at the Department of International Relations of the State University of Rio de Janeiro.

The Chinese president will attend the BRICS Business Forum, leaders' meetings, as well as an informal meeting to commemorate the 10th anniversary of the BRICS summit mechanism. He will also hold bilateral meetings with the leaders of relevant countries.

During these activities, Xi is expected to make proposals on how to deepen BRICS cooperation and build a community with a shared future for mankind.

Carrying on the cooperation momentum of the Xiamen summit in southern China last year, the Johannesburg meeting, themed "BRICS in Africa: Collaboration for Inclusive Growth and Shared Prosperity in the 4th Industrial Revolution," will adopt the Xiamen model of inviting more developing countries to participate, and organize talks between leaders of the BRICS countries and African countries, as well as a "BRICS Plus" leaders' dialogue.

"The BRICS cooperation mechanism is an important platform for South-South cooperation. It will help developing countries to make their voice heard and safeguard the multilateralism-based international order," said Chen Fengying, a research fellow at the China Institute of Contemporary International Relations.

"Consolidating BRICS cooperation as well as South-South cooperation will be the greatest contribution to improving global governance," Chen said.